The search is on for the next Mark Lee and JJ Lin!

It started with Singapore Idol back in 2004. Then Project Superstar, Star Idol, and a long string of other reality talent searches followed. So what else is the entertainment industry looking for other than the best singers, actors, hosts, comedians and dancers? The all-rounded artiste, of course! Fresh from producing the music for director Jack […] 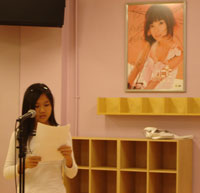 It started with Singapore Idol back in 2004. Then Project Superstar, Star Idol, and a long string of other reality talent searches followed. So what else is the entertainment industry looking for other than the best singers, actors, hosts, comedians and dancers? The all-rounded artiste, of course!

Fresh from producing the music for director Jack Neo’s movie Just Follow Law, Ocean Butterflies Music is teaming up with J Team Productions again for this.

But instead of a nationally televised talent hunt, Music Forest, the music-training institute under Ocean Butterflies that has nurtured the likes of A-do and JJ Lin, has opened the “Very Actor’s Training Course” to search for talents and train them to become stars. The course, open to anyone aged between 8 and 32 who’s interested in singing, acting, hosting and dancing, offers to train performers and groom them perhaps to star in the next Jack Neo movie, slated for production at the end of the year.

The fame may be some time in coming, but that didn’t stop about 500 hopefuls from coming for the first round of auditions, held at the Red Dot Traffic Building on Jun 4.

And there will be more auditions in the foreseeable future, said Mr Billy Koh, the founder of Ocean Butterflies and a renowned music producer in Singapore, was although he couldn’t confirm how many rounds of audition will be held.

The judges for the course will narrow the number of participants down to a group of fewer than 100 people to become students in the course.

The Course with a Difference

Mr Koh highlighted several differences between this talent search compared to competitions such as Project Superstar and SuperBand, both for which he was a judge for. Speaking to UrbanWire in Mandarin, he said that this search attracted more children, mostly 8- and 9-year-olds. “It’s probably because of director (Jack Neo)’s influence,” he said. Neo’s movies, such as I Not Stupid and Home Run have made household names of child actors like Golden Horse Award winner Megan Tay and Shawn Lee.

He felt that the participants at the auditions were also more outgoing, and added that they were joining the course because they know what they want to achieve.

He also expressed surprise at some really talented contestants who had no prior experience in other talent competitions. He provided an example of an 8-year-old girl who was both skilled in wushu and could also dance really well, as someone who impressed him.

“The main thing we’re looking at is their learning ability and performance ability. You don’t have to be really good looking. Singing is not always a factor, if you have something unique, we will look at that,” Mr Koh reasoned.

He also said that Singapore has been successful in bringing singers overseas, but they are still in need of good actors for movies. He cited the example of director Jack Neo using local actors whom we see on television for his movies, which he felt was a little like watching the same old television sitcoms, just that it’s on the big screen.

One thing’s for sure. These participants were notably less interesting than some “characters” we have seen on other talent searches. However some did manage to stand out from the pack, albeit for the wrong reasons.

Like this shy 25-year-old who shocked the whole room when he started shouting and screaming his lines at the top of his voice. Sure, it vibrated with emotion, but it wasn’t the kind that you’d want to hear. When it came to singing however, he sang so softly and gently that one would wonder if it he was a Jekyll and Hyde reincarnate.

Other than that, the contestants were mostly regular, young and eager.

“I first saw this in the newspaper and I wanted to join it as it’s always been my passion. I love singing, dancing and acting,” said Audrey Lee, 19, a student studying Film, Sound & Video (FSV) in Ngee Ann Polytechnic.

She added, “I hope my chances are pretty high. I had stage experience in school before so the crowds don’t get to me.”

An even younger participant, 10-year-old Tang Yi Ming, said he wanted to try it out and hopefully act better. Yi Ming’s a student at Ahmad Ibrahim Primary School.

With so many young aspiring artistes with talent and drive, there’s only hope that future JJ Lins and Mark Lees will emerge from this and become stars in their own rights.