Upon hearing a brief storyline of Juno, it’s easy to imagine the film to be full of corny one-liners, which would be the core of a typical teen flick plot. But within the first 10 minutes of the film, it’s clear Juno is worth all the buzz and awards it’s won. Having made it to […]

Upon hearing a brief storyline of Juno, it’s easy to imagine the film to be full of corny one-liners, which would be the core of a typical teen flick plot. But within the first 10 minutes of the film, it’s clear Juno is worth all the buzz and awards it’s won.

Having made it to the National Review Board’s Top Ten Films of 2007 and bagged it’s the awards for Best Original Screenplay and Breakthrough Performance by an Actress, it’s also been nominated for this year’s Oscars for Best Motion Picture of the Year, Best Director, Best Actress and Best Original Screenplay awards, among a string of accolades including the Golden Globes and the Critics Choice Awards. 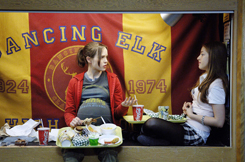 With all the Oscar buzz and awards it’s received so far, it’s easy to expect a somewhat complicated plot to this movie. But in fact, the storyline’s quite simple really.

Juno MacGuff, played by the talented Ellen Page (X-Men – The Last Stand), is a 16 year-old student facing a totally unplanned pregnancy alone. Having confirmed her 9 week-old unexpected state with 3 store pregnancy test kits, she quickly confers with best friend Leah (Olivia Thirlby) and decides to “nip it in the bud”.

However, a niggling conscience plus the knowledge that her foetus probably already has fingernails, thanks to a geeky lone schoolmate protesting against abortion in front of the clinic, soon has her running out of the clinic and her heart set on adoption instead.

After finally breaking the news to her parents, it follows with a search in the Pennysaver, a free community paper, for prospective parents and a house visit to the lucky couple, Vanessa and Mark Loring (Jennifer Garner and Jason Bateman). Initial interaction is awkward between Juno and her dad and the Lorings as the vast contrast between their backgrounds show. Juno is as direct and crude as Vanessa is a perfectionist and refined.

Wittily funny dialogue ensues as Vanessa expresses her desperate longing for a child while Juno replies saying, “You should’ve gone to China, you know, ’cause I hear they give away babies like free iPods. You know, they pretty much just put them in those T-shirt guns and shoot them out at sporting events”, complete with comic hand gestures and sound effects. This is one movie that’s truly comedic in the way of the language, thankfully, not having to resort to the usual overly done slapstick humour to coax laughter from its audience.

Even though the adoption arrangements are finalised, Vanessa remains nervously anxious about Juno’s commitment to the plans. Meanwhile, Mark and Juno strike up an easy friendship as they discover a common passion for music-making and more specifically, guitar playing. 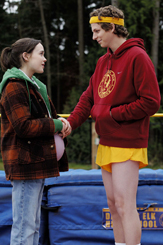 At school, Juno struggles with her emotions and pregnancy alone and is nicknamed the “Cautionary Whale”. Although she has an impossible reserve of strength and is matured in her thoughts, she remains confused about her feelings for the baby’s father, who’s also her long-time best friend and band member, Paulie Bleeker, played by the genteel-looking Michael Cera (Superbad).

She puts up a strong front about their situation, pretending not to care about him, demanding nothing from him and even encouraging him to go date other girls. However, she’s hurt when she learns that he’s really taking another girl to prom and so confronts him, verbally assaulting him with her sharp tongue only to have him remind her that she was the one who first broke his heart by being aloof towards him and that he still feels for her.

She’s dealt another blow when Mark reveals his plans of leaving Vanessa as he cannot tolerate having his unfulfilled dreams and aspirations of a musical career shelved any longer for Vanessa’s plans of a wholesome home. Shocked and disheartened by the crumbling of what she had thought of as a completely perfect family for her baby, Juno drives off from the Lorings’ crying, but returns to leave a note at the doorstep for Vanessa. 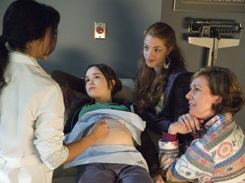 Having seen the breakup of a wonderful couple, she feels hopeless about love but luckily, has her faith reinstated after a heart-to-heart talk with her ever-supportive dad. She comes to terms with her feelings for Paulie and later confesses her love to him. Just as everything seems smooth-going, comes the next big thing in Juno’s life. The delivery.

She painfully gives birth to a baby boy and thereafter, both she and Paulie decides not to see the child, which they feel didn’t ever belong to them anyway. Instead, Vanessa happily claims the much-awaited newborn alone and in replacement of the intended family portrait, she hangs Juno’s framed note over the baby’s cot, reading, “Vanessa: If you’re still in, I’m still in. Juno.” 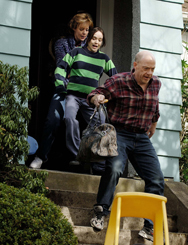 The music used in this heart-stirring film is not overpowering, complementing the motion picture’s mood perfectly with its serious-sounding tunes but funnily worded lyrics. The melodic guitar strumming takes away any angsty connotations, which are common in such teenage dilemmas, and soothingly lightens the show. In its soundtrack, the featured songs are by the Scottish indie pop group Belle & Sebastian, singer Kimya Dawson, Mott the Hoople, songwriter Barry Louis Polisar, The Velvet Underground and indie band The Moldy Peaches. Included are also a few of the rock music which Juno and Mark had exchanged with each other in the film.

All in all, Ellen Page has done more than a decent job portraying Juno with her expressive eyes, comical expressions and impressive acting skills. Juno is a charming comedy definitely worth catching, even with the 50 cents increase in price at some theatres.

UrbanWire gives Juno 4.5 out of 5 stars