What happens when you take a music video in a foreign language and try to subtitle its lyrics as if they were English words? Well, you’ve effectively created a mondegreen or, according to the Urban Dictionary, “buffalaxed” the video. The term “buffalax” is cheekily named after popular video sharing website YouTube video creator Mike Sutton, […]

What happens when you take a music video in a foreign language and try to subtitle its lyrics as if they were English words?

Well, you’ve effectively created a mondegreen or, according to the Urban Dictionary, “buffalaxed” the video.

The term “buffalax” is cheekily named after popular video sharing website YouTube video creator Mike Sutton, better known by his moniker Buffalax. Sutton’s arguably the pioneer of this new genre of hilarious video spoofs that have been keeping YouTube users worldwide in stitches.

“My friends and I were sitting around watching foreign music videos, and we thought it would be neat to be able to sing along to the songs. The rest is history,” Sutton told UrbanWire in an exclusive email interview.

His first “buffalaxed” video was a spoof of German pop band Dschinghis Khan’s live performance of “Moskau”, which drew thousands of hits in a matter of weeks after being uploaded on Nov 25, 2006.

“The success of my videos has been a complete shock to me. I didn’t expect many people to view them,” the 25-year-old resident of Dayton, Ohio, USA, adds.

Sutton only “buffalaxes” a video if it “looks funny and has the right sound and good quality”. The videos are meant for “anyone with an open mind and a good ear”.

“Most of my videos are fan requests,” he adds. 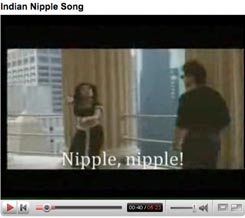 There Are The Fans

A full-time factory worker, Sutton typically spends about 2 to 5 hours subtitling each video. To date, he has produced 14 “buffalaxed” videos, based on music video clips originally created in languages like Hindi, Japanese and German. His works have garnered over 13 million hits in total over 1 and a half years and he has over 3,000 subscribers to his YouTube channel.

Sutton’s most popular video so far is Benny Lava, a spoof of the song Kalluri Vaanil from the 2000 Kollywood movie Pennin Manathai Thottu, starring actor Prabhu Deva. Benny Lava amassed a whopping 6 million hits since being uploaded 9 months ago. There have even emerged a group of copycats who try their hand at “buffalaxing” videos too. One of the more talented ones goes by the nickname of Woodbulb.

And There Are The Critics

Though Sutton’s videos are made in good humour, a small group of his viewers have taken offence at his outlandish ‘interpretations’ of the original songs. There have been tags calling for him to learn the language properly before translating the songs and other nastier, slanderous ones.

All these comments come despite the disclaimer in every one of the videos stating that the subtitles are not the actual English translations of the lyrics.

“Some of the [spoofed] lyrics contain swearing and because of the videos, a lot of people see me as racist, which isn’t the case,” laments Sutton, who’s of Irish and German parentage.

In fact, Sutton’s favourite group to spoof is Dschinghis Khan. Being part-German too, he points out that he wouldn’t be making videos to insult the language of his forefathers.

“I am not a racist person. I just enjoy playing with language barriers,” he says, defending the videos that he has laboured long and hard over.

Though some of the nastiest comments have been tagged to videos of Asian origin, some of Sutton’s more open-minded Indian friends love his work and laugh out loud to videos like “Indian Thriller”. 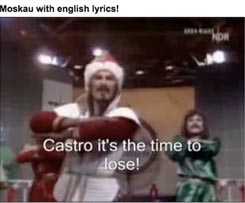 Contrary to jibes that these videos are products of Sutton’s excessive spare time, he says that if he’d any
time to spare, there would’ve been many more “buffalaxed” videos.

“First, my computer exploded and I had to save for a new one. Second of all my job doesn’t allow for
much free time. I don’t really have a chance to sit in front of my computer for a couple hours straight
anymore,” he says, explaining to his loyal fans why there hasn’t been any video uploads for more than
half a year now.

But fret not, Buffalax fanatics! Sutton vows that more videos are coming up in the next few months as long as suggestions for new videos keep coming!

“I’m currently looking at a couple different clips as candidates for “buffalaxing”. 1 or 2 feature Chiranjeevi, the ‘star’ of the Indian Thriller video, 1 features the Benny Lava guy, and there is at least 1 more Dschinghis Khan song I want to do,” he promises.

Also, if you’ve been affected by the poor viewing quality of Sutton’s previous videos, you’ll be glad to know that he is remaking some of them!

“I also want to attempt a remake of ‘Hadschi Halef Omar’ because that’s a great song to sing to and it’s hard to read the lyrics on my video. The source file wasn’t as good a quality as I’d hoped,” he says.

So hold your horses and keep checking back to Buffalax’s channel for more “buffalaxed” videos coming your way!

But if you simply can’t wait and have some time to spare, why not have a laugh and try your hand at “buffalaxing” your own video today? Let UrbanWire know if you’ve done one and we can add it to this article as a link.