Think binge-drinking is macho or cool? Well, it isn’t the drinking but how you’re drinking and we’re saying that moderation is the new sexy

Way ahead of the Christmas season, Orchard Rd will be brimming with festivities as early as November.

But, we’re not talking about Christmas here, at least not yet. We’re talking about the second phase of Get Your Sexy Back for this year.

Look out for the Heeren Festive Event in November, which promises a line-up some exciting performances from talented young artistes – who are also moderate drinking volunteer ambassadors. 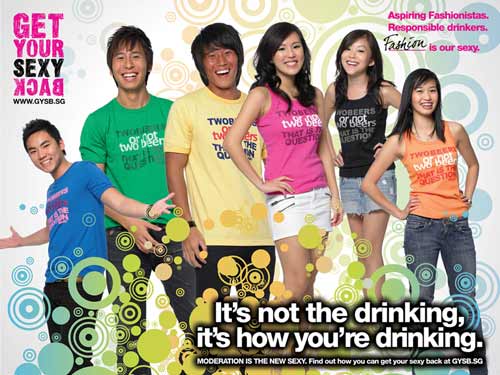 What’s that again about getting your sexy back, you say?This campaign is Singapore’s first youth-led initiative to promote responsible drinking, and we can’t agree more that it has come at a better time – right smack during the peak of Singapore’s party season.

This second-phase of the campaign, which started back in December 2007, is driven by Asia Pacific Breweries Singapore (APBS) and was officially launched on Oct 16.

Since the campaign’s launch of its first phase back in March this year, a study was done to understand the drinking and habits of young adults.

Moderation is the New Sexy

“Two beers or not two beers. That is the question”, shouts the bold print on the brightly coloured shirts donned by the Get Your Sexy Back ambassadors at the campaign’s launch party. 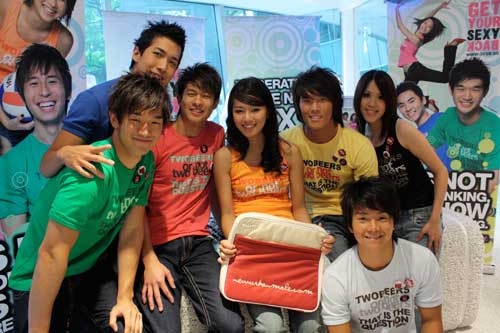 I honestly thought my eyes were not seeing right.

In the next few moments, I remember trying to make a recall to the harrowing old school days when literature lessons were a balm. Now where did the original quote come from?

Explaining the slogan on the shirts, Mr Shenzi Chua, Founder and Director of NewUrbanMale.com says,

“Playing a pun on the famous Shakespearean quote ‘To be or not to be’, the t-shirt slogan “Two beers or not two beers. That is the Question” brings forth the social choices that constantly confront young adults, and in particular the issue of binge-drinking.”

Indeed, it seems that the social and peer pressures that young people face nowadays are tremendous.

55% of respondents disagreed that “Binge-drinking is cool”.

Well apparently, results also showed that females were much less likely to link binge-drinking with being cool, exciting, sexy, macho or glamorous.

Take the hint, guys. We love you more when you are sober.

*531 Singaporean residents aged between 18 and 25 participated in the survey which was conducted at 3 popular nightspots in Singapore.

Get this out of your system

Well, na-uh. This common misconception among those interviewed, but experts’ definition of binge-drinking entails consuming “5 or more glasses of alcohol at a single session”.

In-depth interviews revealed that interview participants saw binging not in terms of alcohol ingested, but whether the individual was able to control the negative consequences of drinking. Thus, vomiting as a result of over-drinking was commonly thought of as binge drinking.

You don’t have to get wasted or set yourself up to the dangers of binge-drinking to have fun with friends. Sign up as a volunteer ambassador and be part of the drive to push the message of drinking in moderation. In signing up, you stand a chance to win a limited NUMXGYSB edition t-shirt from NewUrbanMale.com or Jay Chou’s lastest album.

But surely, that shouldn’t be your greatest motivation for such a cause?

A believer of leading by example, this writer has taken the first step in getting her sexy back by signing up as a volunteer ambassador.