When Smoke Gets in Your Eyes

If humanly possible, Smoke will make you laugh, cry, as well as scratch your head thoughtfully and go, “hmm…” at the same time. 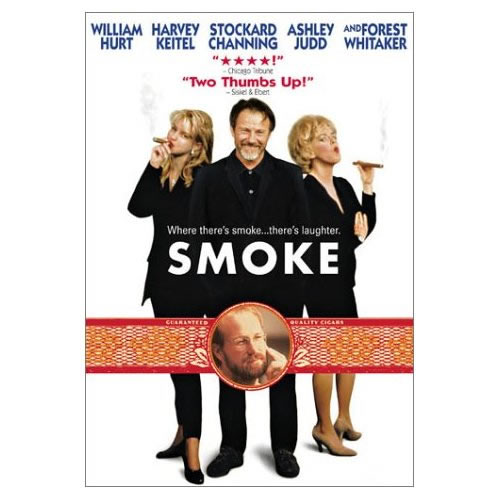 Smoke will make you laugh, cry, as well as scratch your head thoughtfully and go, “hmm…” at the same time.

As name suggests, the film is too intangible to pin down to a particular genre. It’s funny at times, but not in the conventional, laugh-out-loud kind of way. In fact, most parts take on a rather somber tone. You’ll probably shed a few tears, but even so, Smoke is hardly your typical tearjerker

What can only be described as fate brings together 3 jaded New Yorkers – a tobacco store owner, a widowed writer and a wayward teen. Each with a compelling story to tell, their lives unfold around them inside Brooklyn Cigar Co., an inconspicuous tobacco dealership situated at the corner of 3rd Street and 8th Avenue in the Big Apple.

Auggie Wren, brought to life by the talented Harvey Keitel, owns the said tobacco store that is always a hubbub of activity. Wren sees all kinds of customers – men in expensive suits, surprisingly enough, illegal immigrants, and even semi-famous writers such as Paul Benjamin (played by William Hurt who has won 1 of the 4 Oscars he’s been nominated for).

Benjamin lost his wife in a random shooting a couple of years ago. Not only has he since lost his passion to write, but also his will to live. On one of his trips to pick up Te-amo cigars, the one thing he still has a fondness for, he unthinkingly steps into the path of an oncoming truck.

The appearance of runaway teen Thomas Cole (Harold Perrineau Jr) saves him from what could have been a joyful reunion with his dead wife. To return the favour, Benjamin offers Cole a place to stay until he can get back on his feet.

The story that follows is one that speaks of lost love, abandonment and deception – clichéd themes that may have been examined far too many times in the history of film, but this time, is brought out in a manner that is both refreshing and intriguing. The movie is a far cry from your run of the mill melodramas. Stripped of Hollywood’s excess, the concept of Smoke is unapologetically simple and beautifully executed.

Writer Paul Auster’s carefully penned script draws the audience in with meaningful dialogue and teases them with thought-provoking short stories that character Benjamin seemingly pulled out of a hat.

Director Wayne Wang (directed Last Holiday, 2006), on the other hand, brings to the table a deliberate slowness in the storytelling. The film is separated into 5 chapters that transition seamlessly from one to the other with long, stationary shots and pregnant pauses in between to give the audience time to contemplate each episode.

Seldom do screenwriters receive equal credits as directors. To have Auster’s name up there in the opening next to Wang, speaks volume about the importance of the collaboration in bringing the, otherwise uninspired, concept to life.

A visual feat that has to be experienced, Smoke was screened in Cinema Europa as part of Golden Village’s Blog Aloud sessions that bring together aspiring filmmakers and art house enthusiasts.

Catch Wayne Wang’s A Thousand Years Of Good Prayers and The Princess of Nebraska, opening in Singapore on Oct 16.