Tickets to Cape No 7

Together with Festive films, the Urbanwire is giving away 5 pairs of tickets to preview screening of Cape No 7 on Nov 19 at Shaw Lido.

Together with Festive films, the Urbanwire is giving away 5 pairs of tickets to preview screening of Cape No 7, on Nov 19, 7pm at Shaw Lido. 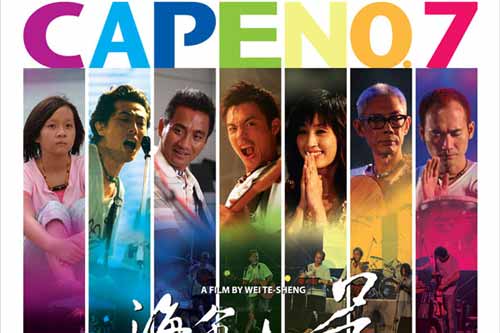 Simply share with us when and who you wrote your first love letter/email to and stand a chance to win a pair of tickets to the screening. Email your responses to contest.urbanwire@gmail.com.

Aga left Hengchun for Taipei in the hope of becoming the singer in a band. After ten years of hard work, he returns home, his dream unfulfilled, and soon gets a job at the local post office. Tomoko is a Japanese model going down in popularity who is just asked to put together a local warm-up band for an upcoming Japanese super star beach concert to be held in Hengchun. However, recruiting the band members proves to be difficult a task as the search for the famous seven samurai. Still, seven ordinary Hengchun residents end up forming the band.

One day, Aga receives a parcel from Japan not meant for him – in fact, it was to have been delivered at Cape No.7., an address that doesn’t exist anymore… But even though he cannot find the address, Aga doesn’t return the parcel to Japan. Rather, he opens it to find love letters written some 60 years ago by a Japanese teacher and addressed to a Taiwanese girl he was deeply in love with, but had to leave behind Taiwan.

During the process of putting the band together, Aga and Tomoko are constantly at odds with each other, but thanks to the love letters, their conflict-ridden relationship slowly turns into love.

And even though they eventually find the lady the parcel was meant for, it seems that Aga and Tomoko are destined to follow the same footsteps as the girl and the teacher in their own love story… Tomoko must now decide whether she will stay together with Aga or go back to Japan alone.