And oh, did we mention yummy for the ice cream already? 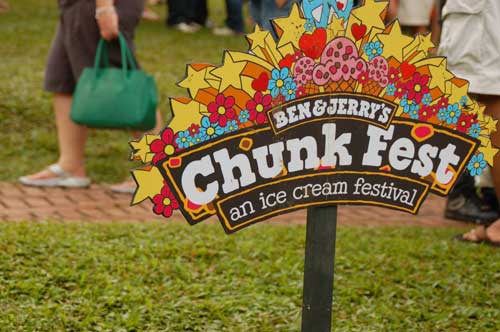 Even the sporadic rainy weather and muddy fields could not dampen the spirits of the huge crowds thronging Fort Canning Green on Dec 6. There were people dotting the greens, with some settling down for picnics, and others busy taking snapshots of the good time they were having. 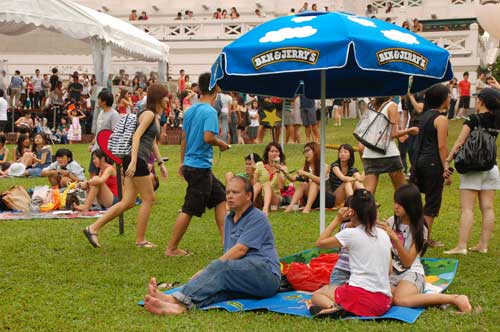 As the day wore on to evening, people were still making their way in to have a great time with friends and family.

With fortune-telling tents, airbrush tattoo services, graffiti painting and caricature drawing lining the side of the sprawling open area, the crowd was spoilt for choice with the wide variety of fringe activities available. 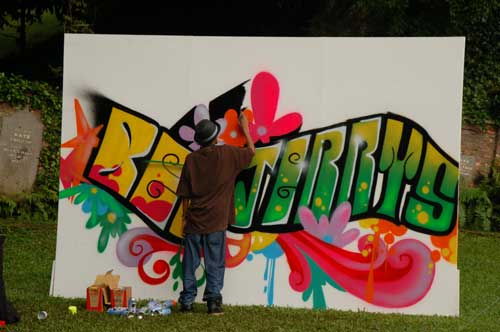 But how could we not mention the highlight of the Chunk Fest? The Vermonster Eating Contest.

When huge tubs of ice cream were plonked down in front of them, some teams appeared slightly nervous, some were busy stretching in preparation, while others simply gazed longingly at the ice cream in the unbelievably humid weather.

With standup comedian Jonathan Atherton emceeing the Chunk Fest, lots of laughs were guaranteed. He specifically reminded the crowd to “never ever invite the winners of the Vermonster Eating Contest home for dinner”, especially when they finished 20 scoops of ice cream in nearly under 3 minutes.

Three Brownies & The Noodle at the Ben & Jerry’s Chunk Fest

A whole lot of chowing action later, the winners of the contest emerged. Monstertruckers took home the first prize, Three Brownies and The Noodle clinched second place, while Chunk-a-licious was the second runnerup.

The winning teams on stage.

The aftermath of the Vermonster Eating Contest.

The ice cream fanatics had something other than the eating contest to look forward to: the 12 Ben & Jerry’s flavours brought in from the United States.

The queues for the limited ice cream flavours were snaking long, at a point in time the UrbanWire estimated, hitting 120 meters. Still, the thought of licking icy-cool ice cream to beat the heat left most feeling good-natured. 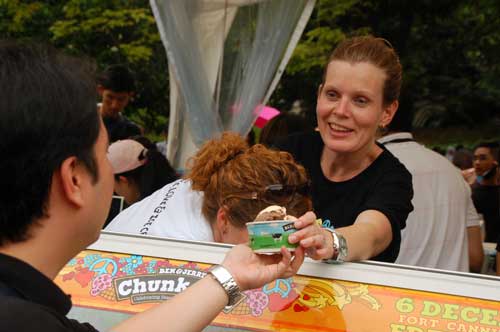 What UrbanWire particularly liked about the Chunk Fest though, was the employment of Flogos (Flying Logos, hence Flogos, geddit?), a foam-making machine which blasted out foam shapes such as stars, hearts, flowers and the internationally-known peace logo. As kids crowd around the machine staring in fascination, adults likewise took out their cameras to snap the adorable, fluffy-looking shapes.

Into the night, Fort Canning rocked and grooved to popular and familiar hits like “The Falala Song”, “Viva La Vida”, “Dancing Queen”, “It’s My Life” and “Take Me Out” by local bands like Tabula, Jack and Rai, Good Fellas and 53A. 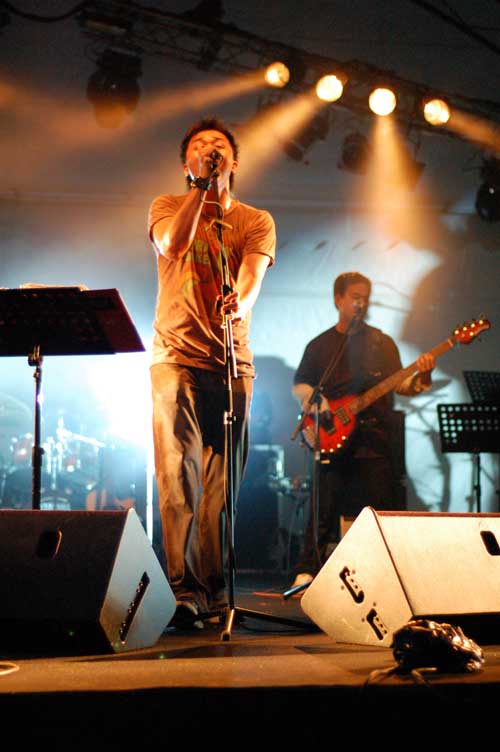 For those of you who missed out on Chunk Fest or still haven’t gotten enough of Ben & Jerry’s ice cream, here are 4 things the UrbanWire would advise you to do:

2. Finish the tub while watching the above 2 Ben & Jerry’s videos. On loop, mind you.

3. Pray the next Ben & Jerry’s Chunk Fest will happen early.