Breakthrough artist of the show and year

Life’s a cycle for the Live ‘N’ Loaded breakthrough artist and it is just starting to roll. 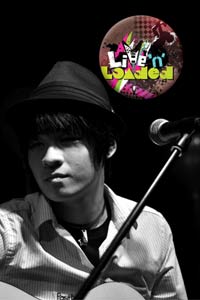 A medium built, slightly muscled boy stands on a makeshift stage in The Heeren. He clutches a guitar in his hand and smiles shyly at the 80-strong crowd. He sweeps his hand across his hair before plucking at a string. He looks just like a nervous boy on his first date.

However, when he parts his lips, strums his guitar and starts to sing, it’s as though a different side of him emerges. The shyness dissolves as confidence takes over – for him, home is where the stage is.

Weiwen Seah may look like the boy-next-door, but his voice packs a punch that seems to go beyond him. He goes by the name For This Cycle on popular talent show Live ‘N’ Loaded. The logic behind the band’s name is straightforward. He says, “For This Cycle is basically the whole life cycle one has to go through – you get born, you live and then eventually you die.”

Only 16 this year, he is fast making a name for himself in the local music scene. Chosen as the best breakthrough band on the show, For This Cycle is set to perform at Baybeats festival this year, among many other shows.

For Weiwen, the stint on TV just happened. “I didn’t want to join Live ‘N’ Loaded at first. My friend told me to do it, so I uploaded my stuff on the website,” he says in his husky voice. “Then they called me down for a review session and I sat in front of six people or so. And they called me back for the producer’s pick section, so that’s cool.”

With his young age, songwriting and guitar-playing skills, Weiwen is like a local male version of American country superstar Taylor Swift. Both of them draw their writing inspiration from everyday life – both the good and the bad.

Since he first picked up the guitar at the age of 12, he has always wanted to play for others. A quick check with him showed that many of his goals for his craft have already been accomplished.

“I mean, in this whole year, I’ve been on Live ‘N’ Loaded, released an Extended Play (EP) sampler (a CD compilation of 3 to 5 songs) and I’m going to perform at Baybeats. It’s really great actually.”

So what plans does he have in mind? “Ok, this may sound really lame and corny,” Weiwen laughs, shifting in his seat, “but I want to sing the National Song. No, no, not ‘Majulah Singapura’, but the theme song for one of the National Day parades! It would be so cool to sing that!”

And for that, we wish him the best of luck.