Chilled Satisfaction Comes In A Dozen

In sunny Singapore, what better way is there to cool down than indulging in ice cream. All we had to do was to go down to the Ben & Jerry‘s Chunk Fest on Sep 12, where familiar favourites such as Phish Food, Strawberry Cheesecake and Chunky Monkey kept you wanting more. But, on top of that was a special treat: a dozen exclusive flavours were brought in for this year’s Chunk Fest, so that you wouldn’t have to cross the seas to savour them. UrbanWire couldn’t miss the exciting Ben & Jerry’s Chunk Fest and the special ice cream flavours. So, here’s our description of the ice cream and our top picks.

Topping the list is Berry Berry Extraordinary. With swirls of blueberry and raspberry fruit sorbet, it’s no wonder this looks “berry-berry” pretty. The purplish colour shows off the fact that it’s made of fruits, and it’s definitely as yummy as it appears. There may be no fruit bits, but it’s absolutely bursting with fruity, berry sweetness. It lives up to its name indeed, with an extraordinary smooth texture, unlike other types of sorbet that feel like shaved ice.

Making it to second place on our list is the Triple Caramel Chunk. The name already sounds “diabetically” sweet, but wait till you read what it consists of: caramel ice cream with swirls of caramel and fudge-covered caramel chunks. This is one to die for if you have a sweet tooth. Take a bite into those chocolate chunks and smooth caramel will be spurting out in your mouth. As with all Ben & Jerry’s ice creams, there’s a generous serving of caramel chunks in 1 scoop of ice cream. We found almost 9 chunks in our serving. 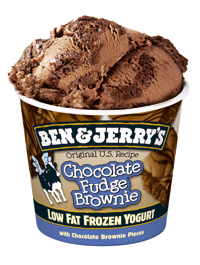 In third place is the Chocolate Fudge Brownie – Frozen Yoghurt. It gives you the best of both worlds: decadent chocolate and fudge, but you can still rest easy on your conscience. You’ll enjoy the same rich chocolatey taste as it’s original Chocolate Fudge Brownie, just made of frozen yoghurt, which makes it less sinful than its predecessor. Despite being yoghurt, the taste doesn’t give it away, making you think you’re actually having ice cream.

That was our top 3 picks and now for the rest. They are good too, and arranged in no particular order. 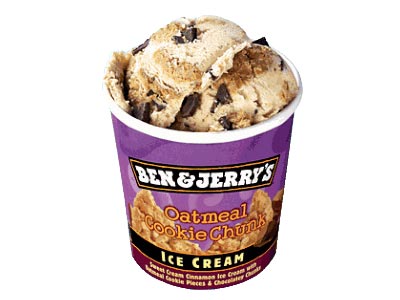 Sweet cream cinnamon ice cream with chunks of oatmeal cookies and fudge, Oatmeal Cookie Chunk is an unbelievable combination that tastes surprisingly yummy, but may be a tad too sweet. The cinnamon tinge seems to come from the oatmeal cookie chunks instead of the ice cream and the fudge neutralizes the sugar rush a little with about 20% cocoa. The lavish amounts of chunks of oatmeal cookies make this one a value for money buy as well. For those with a penchant for sugar and spice, this one’s for you.

Coffee ice cream made with Fair Trade Certified coffee, this one tastes almost like frozen latte, with a strong milk flavour, but in a good way since it’s ice cream. With no chunks or nuts, this has a very smooth texture that slides down your throat. If it melts before you can devour it in this hot weather, don’t worry, it’s still palatable, very much like coffee milkshake.

Rich buttery ice cream with a liberal serving of roasted pecans, it was almost as if half the cup was ice cream and the other half pecans. Sweet vanilla tinge with creamy and a tad salty buttery taste gives a unique take to what we know as ice cream. If you’re peckish for a large serving of pecans, this is for you.

This simple mixture of vanilla ice cream and chunks of HEATH Bar crunch sounded very promising, but having a spoon of it was different from what I was expecting. It was just vanilla ice cream with chunks of crushed nuts. I guess ice cream needs to be down-to-earth and simple sometimes.

As with all Ben & Jerry’s ice cream flavours, this one also has a fascinating name. Equally irresistible is what’s in it: chocolate ice cream, peanut butter cookie dough, brickle candy pieces and white chocolatey chunks. The chocolate ice cream was heavenly and as the smooth cream disappears from your taste buds, a familiar tang surfaces: peanut butter. But beware, the peanut butter tends to get stuck in the throat and that calls for plenty of water. The brickle pieces added a nice crunchy texture but weren’t very prominent and it would have been better with more candy pieces. Disappointing also was the colour. Why wasn’t it yellow? It looked more like ordinary chocolate ice cream rather than what it’s name would imply.

If you’re waffly about choosing between ice cream and sorbet, then this one’s for you. It’s a good mix of tangy and cream flavours with orange sorbet swirled with vanilla ice cream, giving you dual happiness. The orange swirls and cream coloured exterior make it seem like you’re actually eating an orange. The combination seemingly reminds one of yoghurt.

Chocolate peanut butter ice cream with gobs of peanut butter cookie dough and fudge chips. The mix of ingredients in this one is enough to set your imagination run wild, but I’ve come to the conclusion that peanut butter and ice cream don’t really make good friends like Ben & Jerry do. Similar to the others with peanut butter in them, this one leaves the feeling of a peanut butter-lined throat. Some things are just best left on the good old toast.