Directed by veteran Roysten Abel, the group seduced the audience with its myriad of spectacular lights, stage design, music and movements. 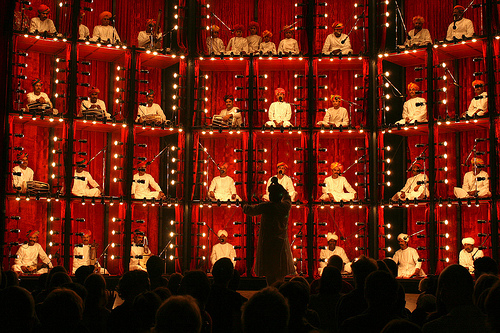 On a stage setting of what seemed like a decorative illuminated chocolate box with 36 velvet-red sections sat 43 traditional musicians from the deserts of Rajasthan in India. These folk musicians, apt in classical Indian music, come from a caste of performers who played for the Kings of Rajasthan.

A solitary Kamancha (a violin like instrument) player, clad in white robe and a colourful turban began the show while the rest sat in the dark with their curtains closed. Another vocalist joined in with his story telling styled folk song and his velvet-red section lit up. Bit by bit the excitement built up as more curtains opened and more boxes were lit up, revealing each element in a well-orchestrated symphony. 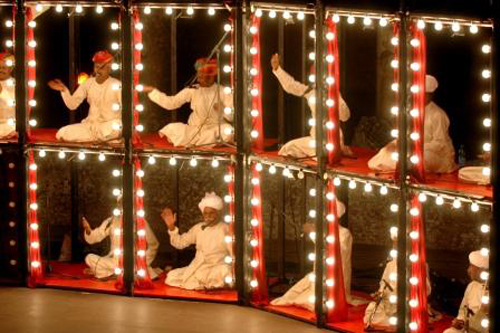 More voices and instruments such as the Kartal (Indian wooden clapper), Sarangi (Indian fiddle), Morchang (wrought iron instrument), Murli (a form of wind instrument) and Dhol (a North Indian drum) were revealed within each song.

Excitement was sustained throughout the performance building up gradually to a climax at the end with every section lit up and the theatre bursting to its brim with a concoction of songs and music. 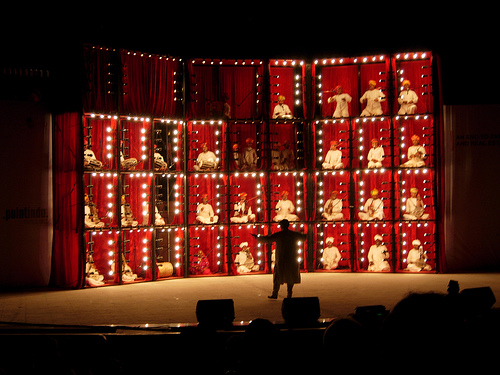 Throughout the entire performance, a barefoot conductor, Daevo Khan guided the group on stage with his energy bursting movements and Kartal. It seemed rather impossible not to enjoy the music when one could have that much of gusto throughout the 70 minutes of music galore and with the audience clapping along to the rhythm of the beats.

Evident from its successful tour in Europe The Manganiyar Seductionneeds no prior understanding of Indian culture and music to enjoy such a spectacular performance. Roysten Abel is now working on a sequel of sorts, titled The Manganiyar War.