Many netizens abhor the now-infamous Fun Pack song. The UrbanWire goes back in time and digs up cheesy and ridiculous Singapore-made songs.

The Fun Pack Song, which drew ire and disdain from netizens both in Singapore and abroad.

Let’s face it – you’ve all heard that song. At an event where thousands of Singaporeans congregate to celebrate the anniversary of their nation’s independence. On a day associated with patriotism, the colour red and the flag of the nation, which turns 46 this year. At the time to celebrate the Republic’s achievements over the years in the heart of the city, against the backdrop of the city skyline.

At that point in time, you realise that you’re listening to the Fun Pack Song. Starting off with encouraging you to fly the flag, the lyrical value starts spiraling downwards when you hear the hosts sing about waving lightsticks, pretending the parade is a disco.

But the abomination does not end here. The song celebrates the very contents of the bag – wet tissues, NeWater, biscuits and sweets, before ending off with “Attack the fun pack!” 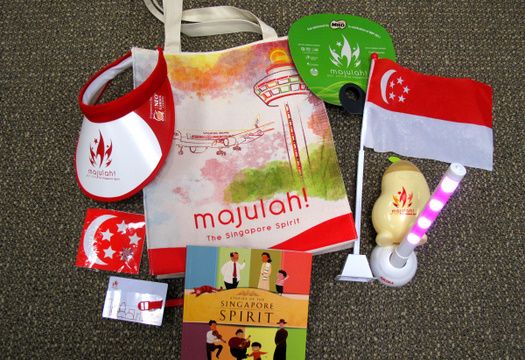 The fun pack, with its contents displayed outside, is a mainstay in every National Day Parade.

Such is the irony of a verse from the song, “We like the fun pack song”, that the original clip, taken during a combined rehearsal at the Marina Bay Floating Platform on Jul 2, which has since over 190000 views on YouTube, has also received more than 7000 ‘dislikes’.

The same sentiment was echoed when The UrbanWire conducted a poll, of which, as of press time, out of 61 respondents, 55 had voted the Fun Pack Song as the ‘FAIL song of Singapore’.

And with Lady Gaga herself coming to Singapore on Jul 7, fans would be sure that the 25-year-old would literally ‘facepalm’ upon hearing that song.

YouTuber nusld summed it up in their own words, “I feel ashamed being a Singaporean. Our National Day should be a patriotic moment for Singapore but the organisers seems to insult it by infusing (an_ American Pop song and then messing up with copyrights issues. What next? Rap for our pledge and dancing to the tune of our National Anthem? They are over anticipating what youths want and imposing it on all of﻿ us… Pity!”

But the Fun Pack Song is not the first song to receive flak from Singaporeans and netizens around the world. More recently, the inaugural Youth Olympic Games, held in 2010, saw the Singapore Sports Council team up with homegrown crooner JJ Lin for a jitty entitled ‘You Are The One, Singapore’.

JJ Lin's jingle for the 2010 Summer Youth Olympic Games in Singapore was (in)famously remembered for its cheesy chorus.

The title seemed to imply uplifting, inspirational and highly motivational lyrics for athletes competing at the Games. But catchy as the hook “Oh yeah oh yeah oh yeah, HEY!” went, it was panned by netizens for the cheesiness of the chorus as well as the ‘butterfly hand’ dance. Even the appearance of former national sporting heroes C. Kunalan and Ang Peng Siong, as well as 2009 Asian Games swimming champion Tao Li did little to boost the public’s approval of the song.

And it is not just celebrities or singers who drew flak for songs relating to their public campaigns. In 2007, members of the Singapore Media Development Authority’s senior management uploaded a rap video, which went viral, going as far as to clinching 6th spot on YouTube for the most number of views during that period of time.

The rap featured CEO Christopher Chan and media veteran Man Shu Sum. It involved practically little or no rhyming, unlike typical hip hop music. Cynical comments like “They were just having fun with their new green screen” and “Exceedingly painful to watch” appeared all over. But some gave the benefit of doubt and said, “But hey,﻿ they got the balls eh?”, giving a rating of 4 out of 5 for the video.

Songs with poor lyrics, cheesy dance moves and slipshod production will no doubt continue to be on the minds of netizens. And there is one thing for sure – there will be more to come in future. Keep your eyes on the Net.