The Korean Music Wave 2011 saw rookie groups like Teen Top, The Boss, TOUCH and DAL★SHABET strut their stuff onstage. But it was the return of Big Bang that got the crowd going.

10 Korean groups hit Singapore’s shores on July 15 for one of the biggest K-pop events of the year, the Korean Music Wave 2011.

Although attendance at this year’s sequel at the Singapore Indoor Stadium was a tad lower at 80%, compared to the sell-out crowd seen at Korean Pop Night Concert 2010, the fans more than made up for it with their off-the-Richter-scale hoots and hollers.

From fanboards and tee shirts to light sticks, the crowd of mostly female fans from teens to adults, came fully prepared to show their undying love and support for their favourite groups. Nothing it seemed, not even the rain, could dampen the excitement of the almost 7,000 die-hard fans.

As the lights dimmed and guest-emcees for the evening, Kevin from U-Kiss and Min from miss A took to the stage, fans went wild as the effervescent duo wittingly engaged the audience and carved out an endearing moment for themselves. 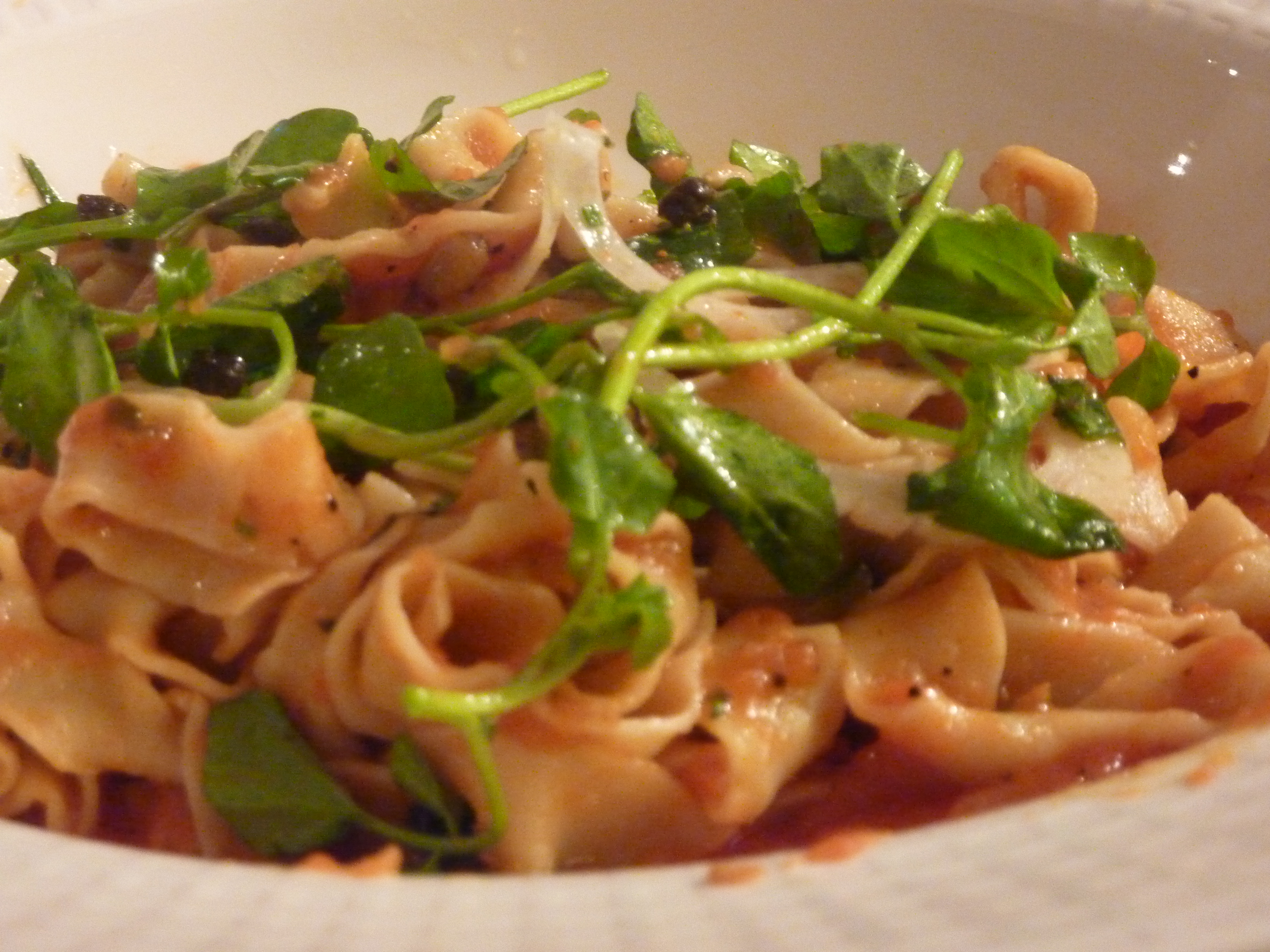 The concert kicked off at 8pm with popular quintet FT Island singing “Love Love Love”, followed by some of their popular hits such as “Hello Hello”, “I Hope” and “Bing Bing Bing” which had the entire audience lyric-chanting to their songs. Lead singer Lee Hong Ki impressed with his powerful vocals, and the group’s high-energy opening performance sizzled the fans. 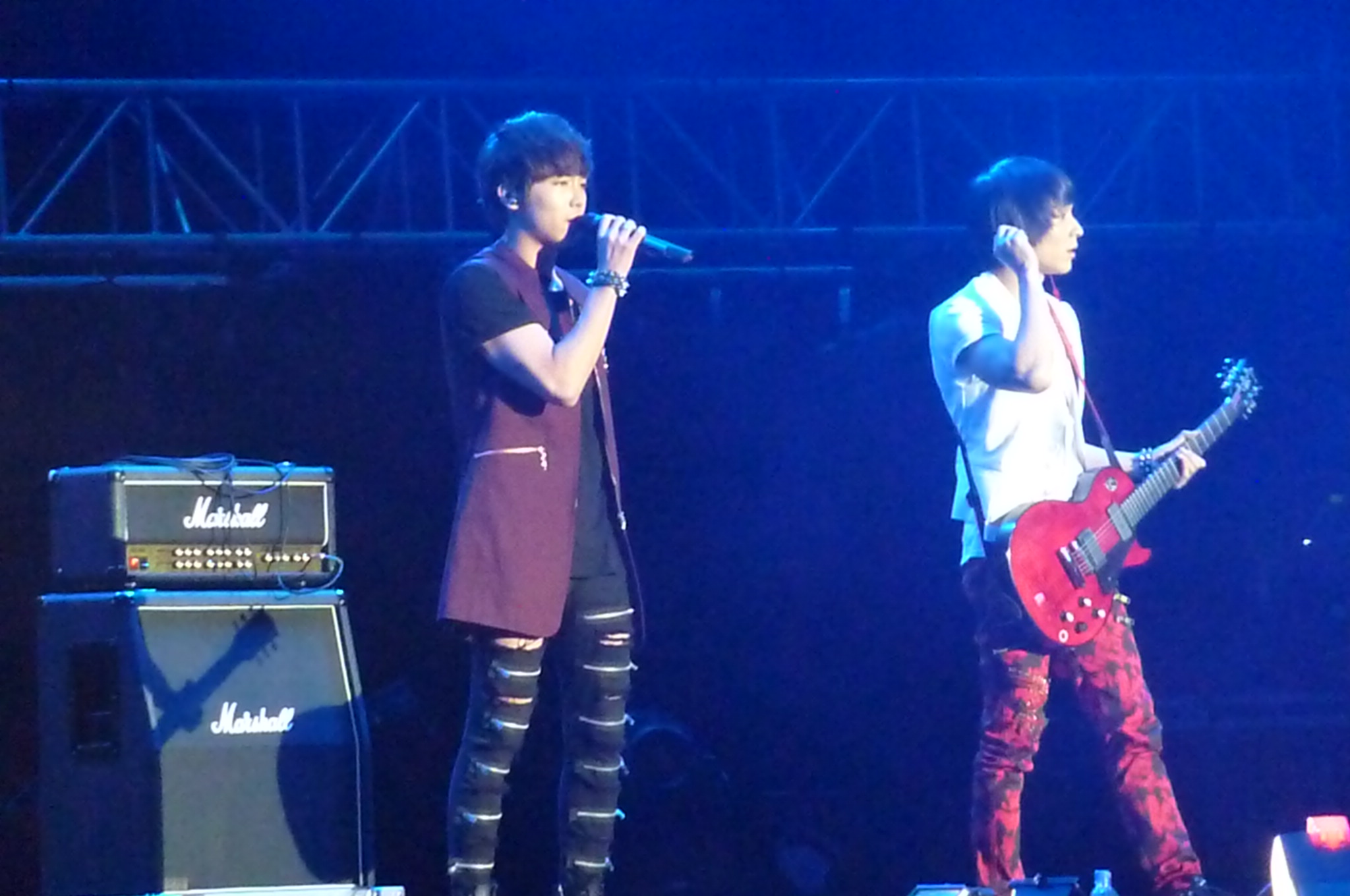 The temperature however took a dip as the first half of the concert was dominated by newer bands and lesser-ranked idols. Each group performed a total of 3 songs. Rookie boy group Touch, who donned LED outfits to provide the extra burst of energy, took to the stage with “Rockin’ the Club”, “Today” and “Me”.

6-member girl group Dal Shabet showed they can do with more practice to live up to their image as “Supa Dupa Divas” and their rendition of “Pink Rocket” did not quite lift off. Boy band X-5 who sang “Don’t Come Near Me”, “Fantasy” and “The Show Is Over” drew the loudest applause for their nifty foot work. Going for a cuter and purer image, The Boss, in their sky-blue and white sartorial splendour, belted out a bubblegum pop tune “Admiring Boy”, followed by “New Boyz” and “Stumble Stumble”. 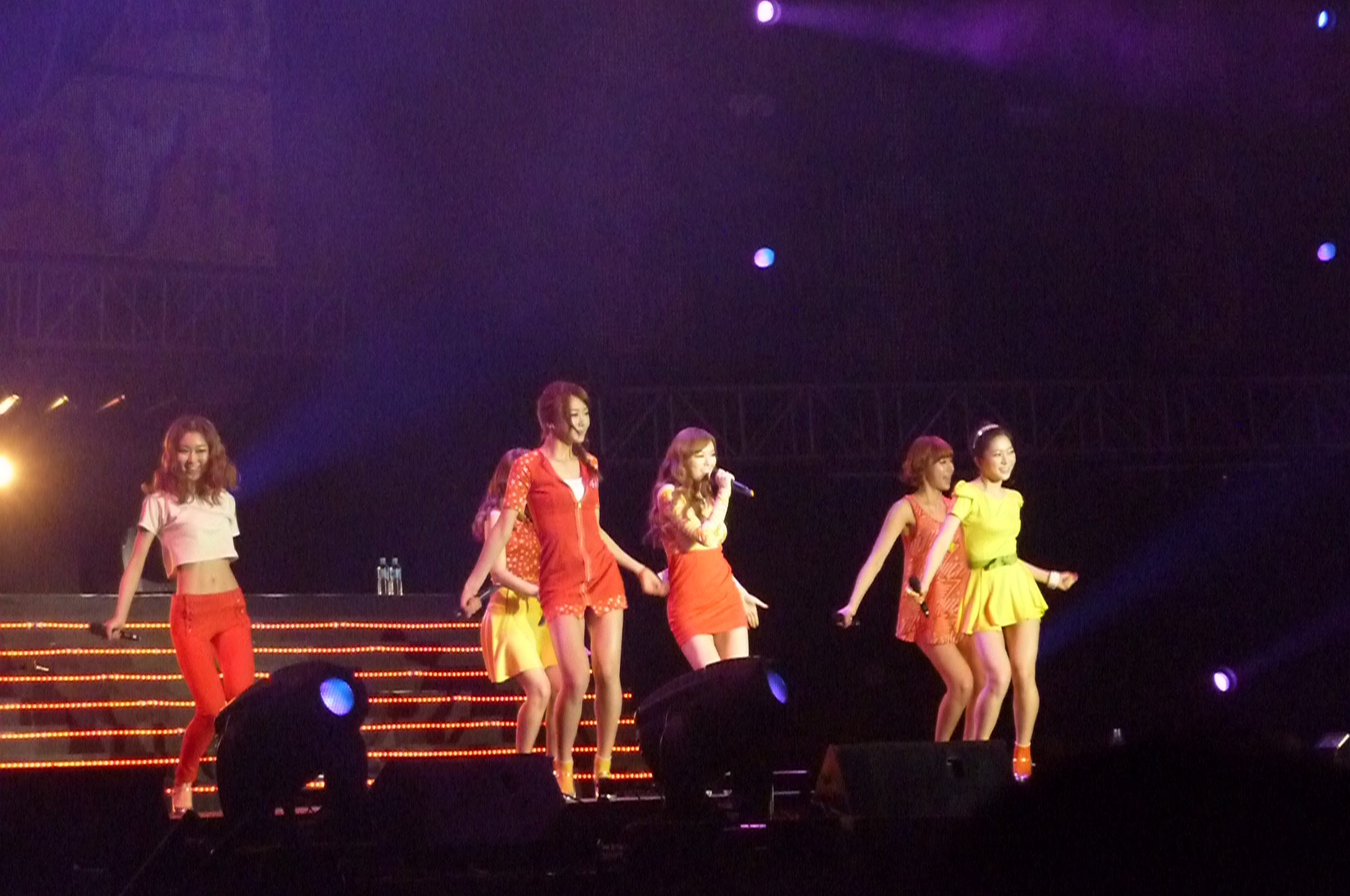 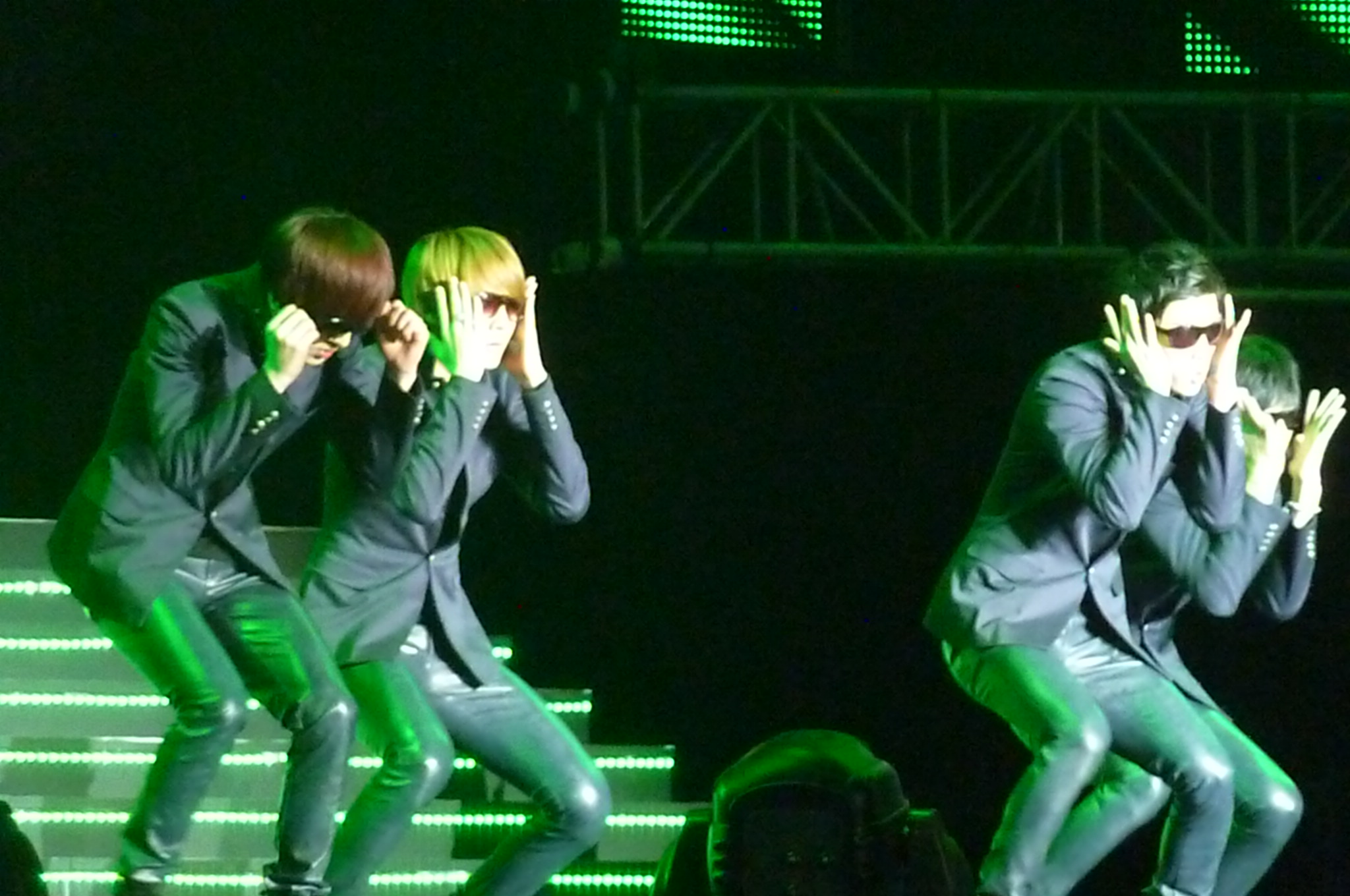 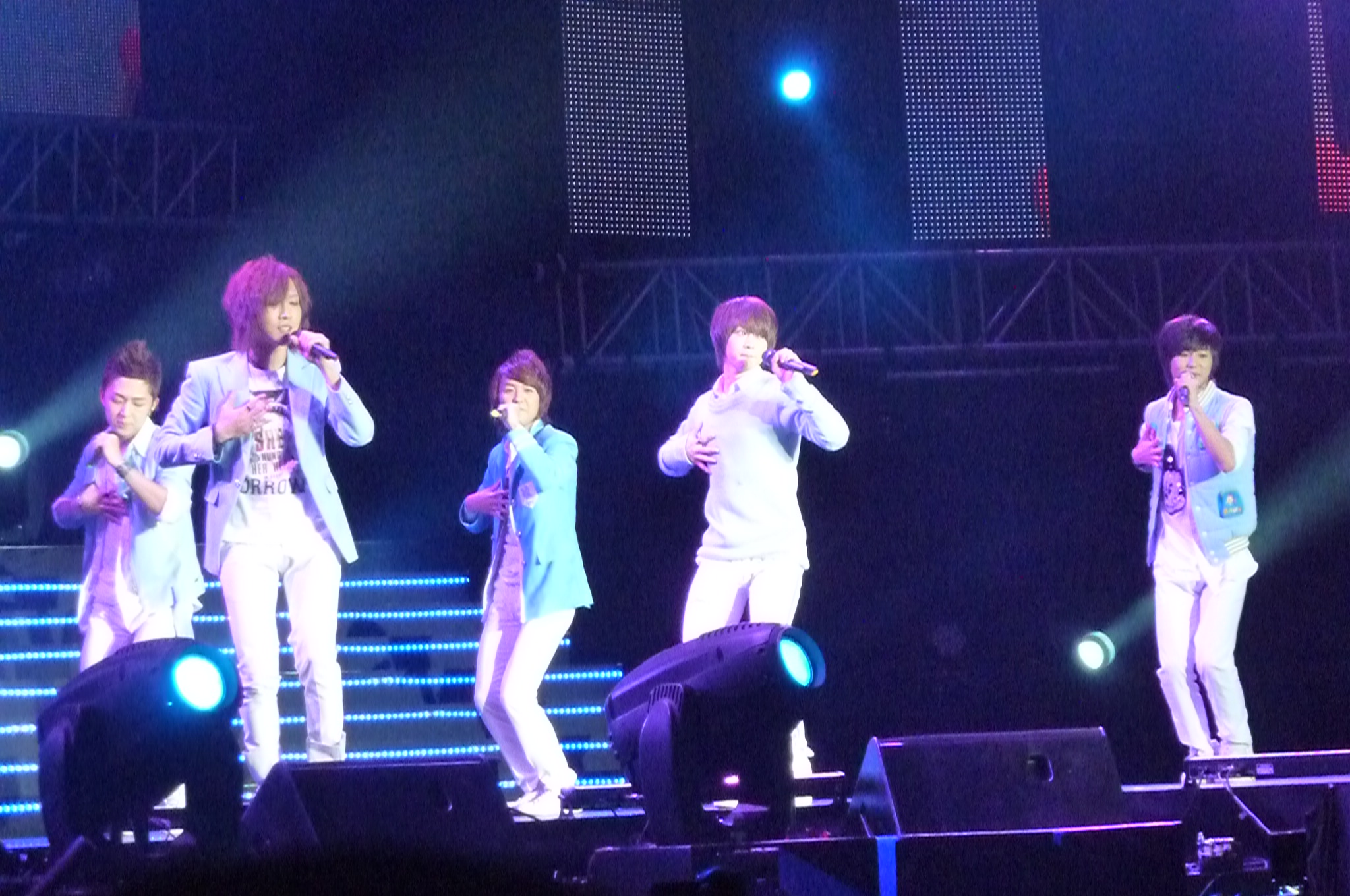 It was K-pop newbie Teen Top that ruled the rookie bands. Despite their youth – their ages range between 15 and 18 – they were ahead of the game and clearly a cut above the rest. With well-rehearsed dance moves to some of their most popular hits like “Clap”, “Angel” and “Supa Luv”, they worked their charms on the crowds, and judging by the ear-smashing decibels that resonated throughout, this up-and-coming boy band scaled new heights in popularity ratings with their impressive performance that night. 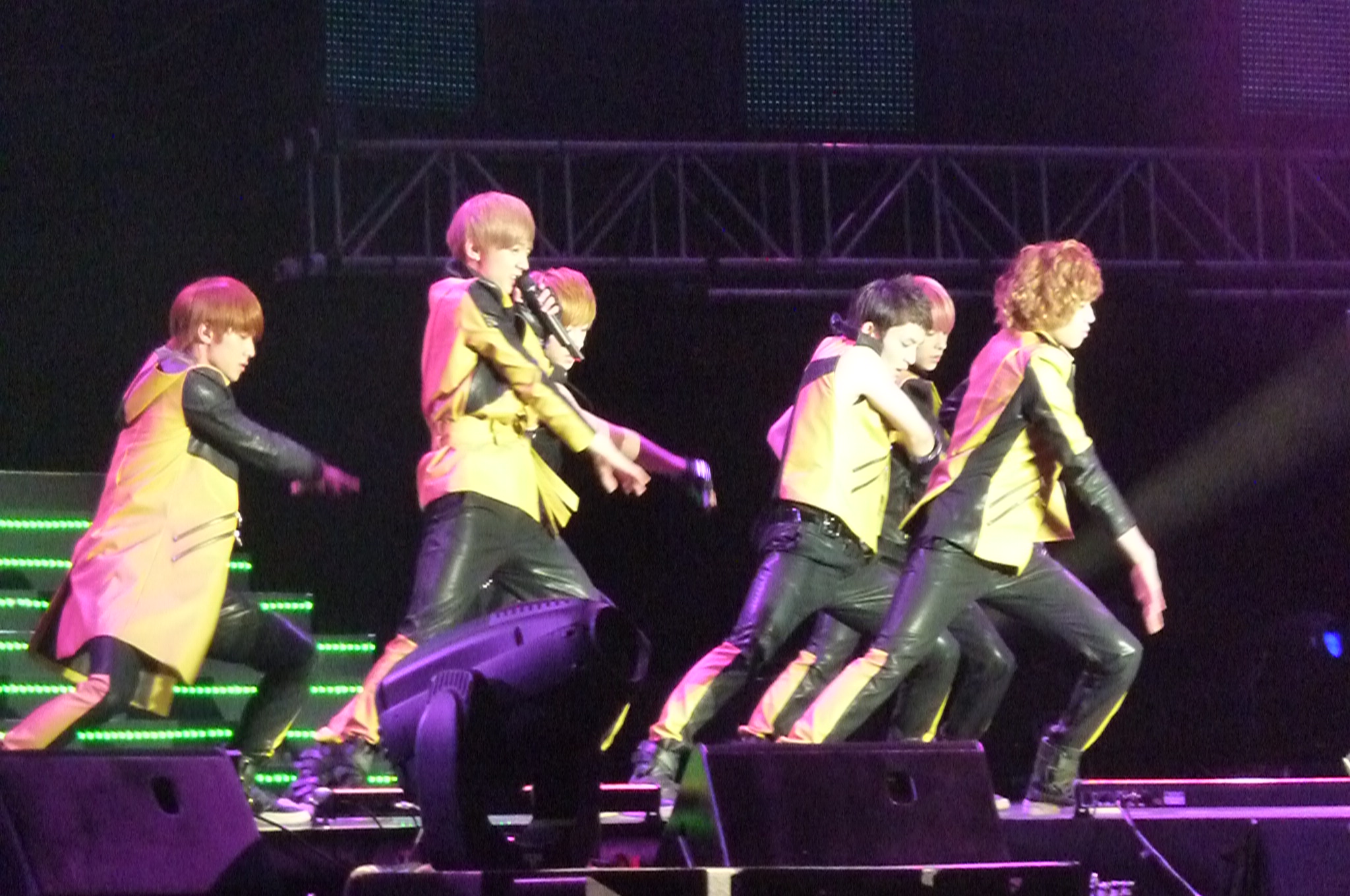 Things started to heat up again when second girl-group for the night, quartet Miss A took to the stage. Testosterone levels went into overdrive as the girls performed their sexy dance moves to the catchy dance track “Breathe”. They also sang their English tracks “Love Alone” and “Blankly”, and fired up the audience with “Bad Girl, Good Girl”, their debut track which catapulted them to fame. 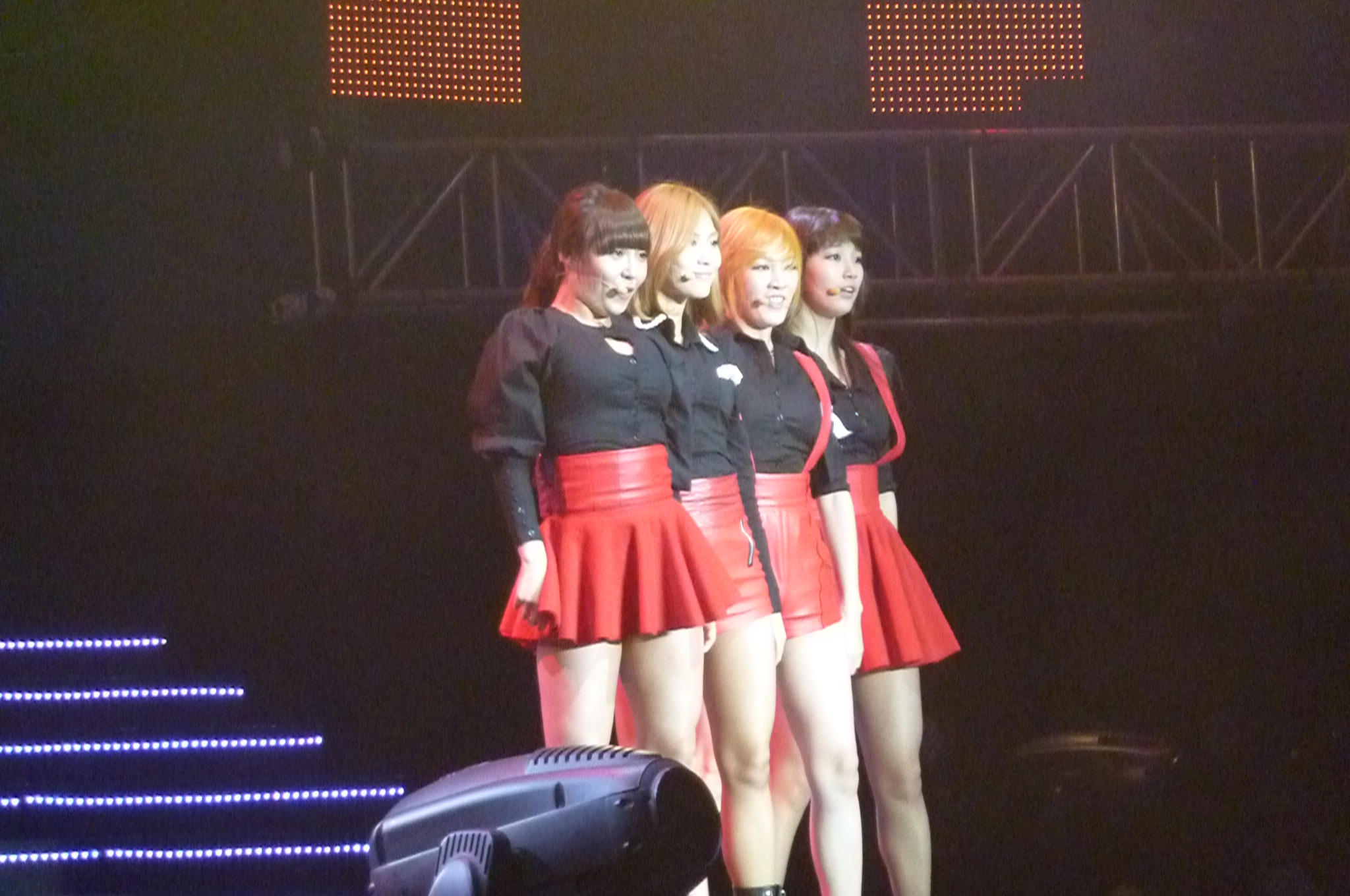 7-member U-Kiss opened with “Round and Round” and showed their controlled vocals with a soothing ballad “0330”. They also surprised with their new song “Everyday” which according to Kevin, they “had not performed before”. They delighted the crowds with their popular dance track “Am I That Easy?”, and aptly, with ease drove fans to frenzy with almost everything and anything they did or said. “We missed you guys so much” U-Kiss declared, which warmed the hearts of fans so effortlessly. 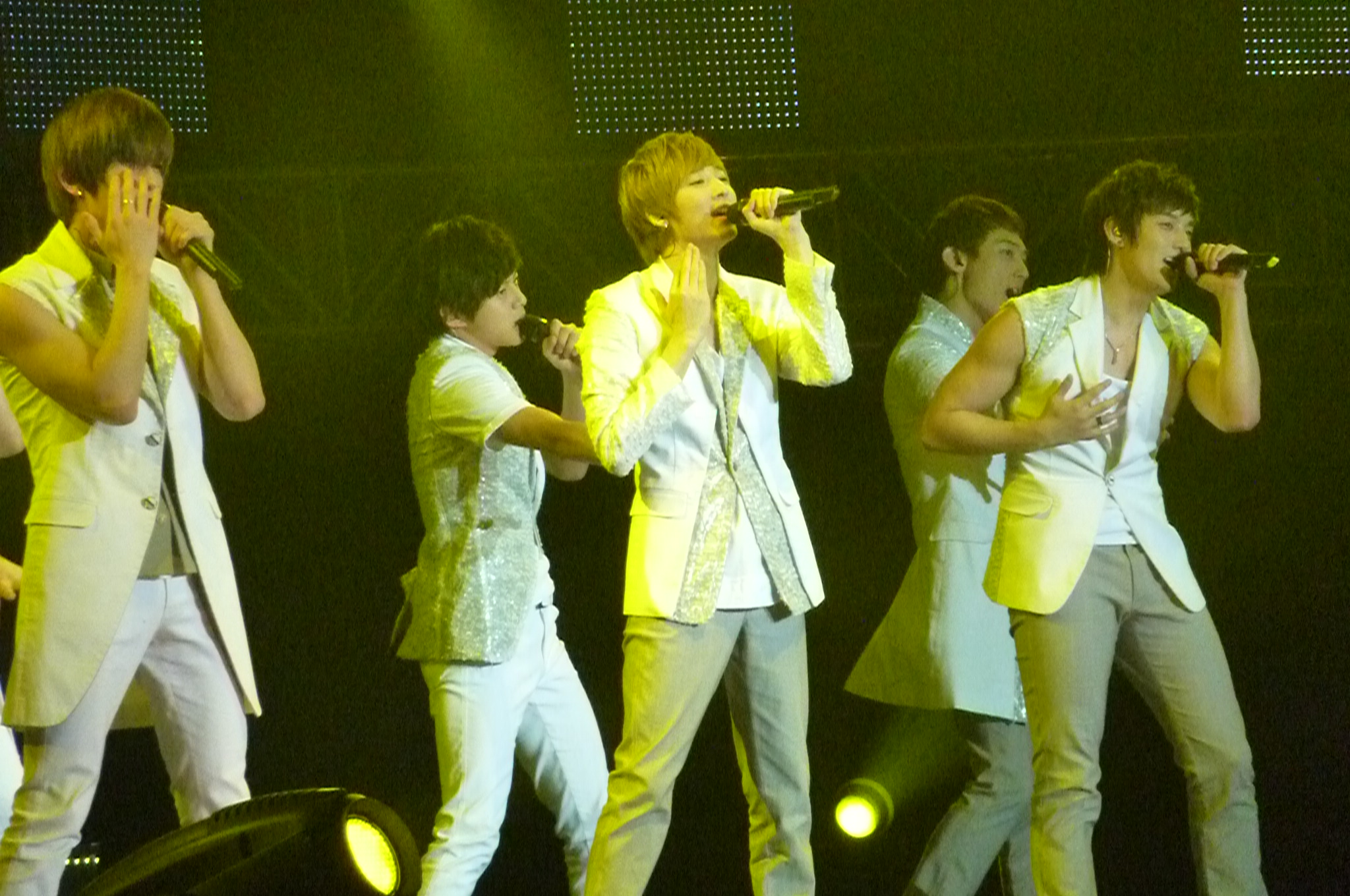 It was obvious who the crowds came for. When 2NE1, known for their unique brand of upbeat electro and hip hop music, and powerful dance styles hit the stage, the air electrified. With their “Bad Ass” swagger and charisma, 2NE1 set the stage ablaze with their debut song, “Fire” and had everyone leaping out of their seats. They proved themselves worthy of their latest single “I Am the Best”, boasting a set of great pipes as they belted out chart-topping tracks like “Lonely”, “Can’t Nobody” and “I Don’t Care”. Their legion of fans (called Blackjacks) knew almost every word to the songs and sang along like a huge karaoke session. Not to mention, the many fans who kept up with the dance routines too. 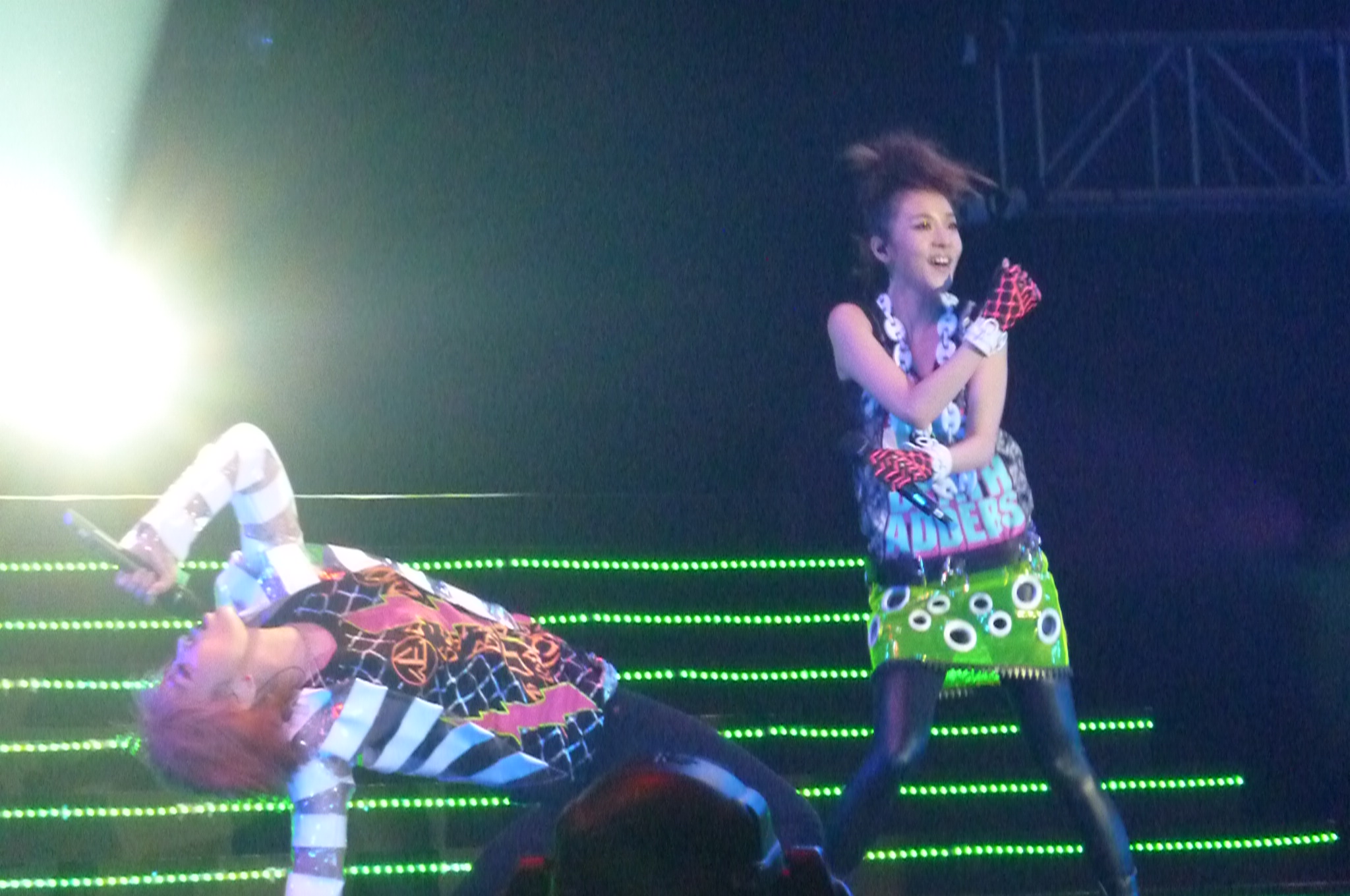 Saving the best for the last, the appearance of Big Bang sent the fans or better known as VIPs, into thunderous chants of “Big Bang! Big Bang!” as they waved their trademark Big Bang crown lightsticks in the air. Although missing fellow member Daesung, the opening performance of their 2011 comeback song “Tonight” and the climactic rock-star finish by leader G-Dragon, who smashed his guitar into pieces on stage, brought the house down.

During the interview segment, the 5-man band’s R&B soloist Taeyang was asked what his favourite Singapore food was, and came up with an impromptu “Chilli Crab” rap (the dish was recommended by his fans). When asked how he felt about Singapore, Seungri said: “Singapore is awesome. So cool and awesome.” And ‘awesome’ also best described the solo performances that followed. 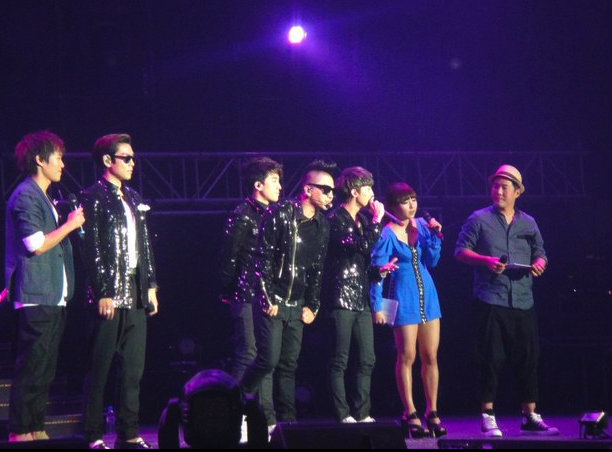 Big Bang’s maknae (youngest member) Seungri put up a raving performance, showing off his clean and sharp dance moves with “Strong Baby” and “What Can I Do?” 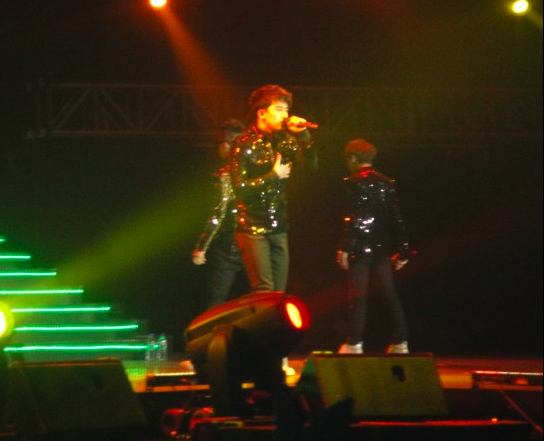 Taeyang with his hot bod got the audience swaying to the high-octane performance as he flawlessly executed his sleek hip-hop dance moves with “I’ll Be There” and “Where You At”, of which both hits were engineered by fellow YG Entertainment label-mate Teddy Park. He caused a mad scramble in the mosh pit when he took off his red studded jacket and threw it down to one lucky fan who must have fought tooth and nail for it. 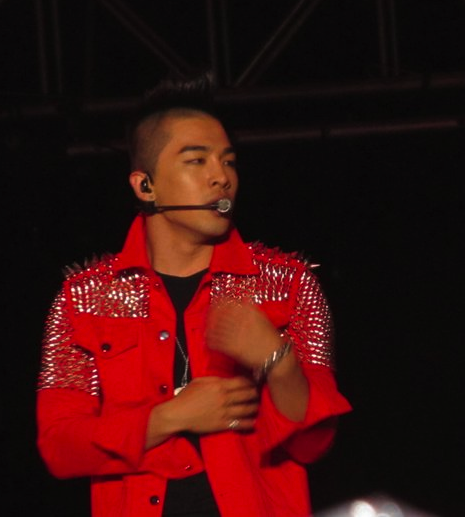 Dynamic duo G-Dragon and T.O.P explosive rendition of “Knock Out” literally knocked the crowds out with their heart-thumping, feet-stomping act. As they blasted off with their adrenaline-packed song “Oh Yeah” which also featured the vocals of Park Bom from 2NE1, the crowds grooved in agreement that this was a superb performance. It built into an energetic finish with their electro dance track, “High High”, sending the fans soaring into stratospheric exuberance. 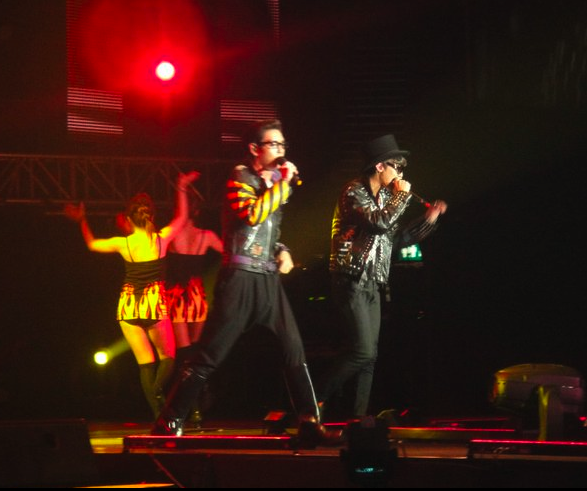 The boys re-emerged together and sang their last song, “Love Song”. After rounds of persistent screams and calls for encore, they rewarded the fervent fans with a fitting finish: It was “Hands Up” to a concert that lived up to the hype and the price of the ticket. 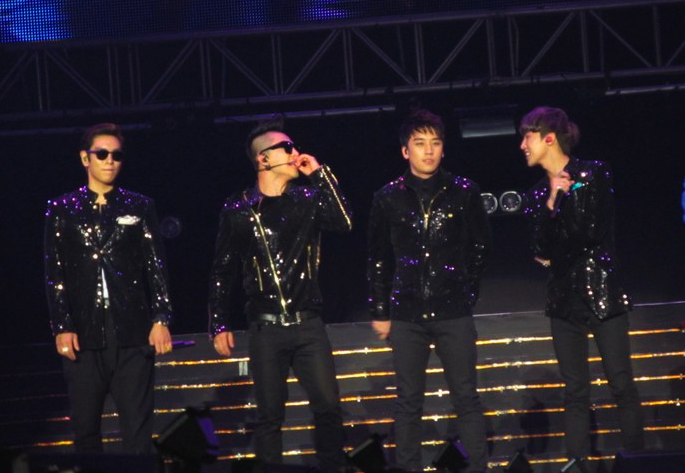