From Fandom to Stardom

The UrbanWire catches up with homegrown J-pop band Sea☆A to chat about their journey from fans to stars. 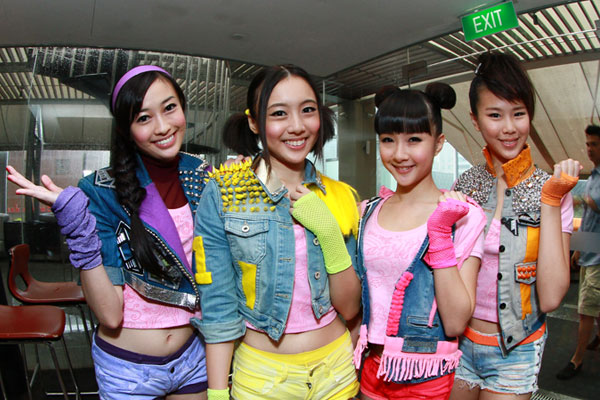 From left to right: Beryl, Valerie, Wynnie, and Estelle

True to the Japanese idol group style, Sea☆A’s members all have distinctly different personalities: Beryl, 20, is the bashful beauty while the sweet Valerie, 20, sounds just like an anime character. Cheerful and perky, Wynnie, 22, is the one who best embodies the “moe” aesthetic. Finally, the youngest member of the group, Estelle,19, is sporty.

Sea☆A’s name comes from the special connection the girls share. According to their official website, ‘SEA’ stands for South East Asia – Wynnie is Malaysian, while the rest are Singaporeans – while the ‘A’ stands for anime, the girls’ common love, which led to the formation of the band. The star in their name represents the stars they hope to become.

The girls started off as part of AFA’s Moe Moe Kyun Maid Café, and were later discovered because of their talents and invited to be a part of Sea☆A.

“It’s almost surreal, because we never expected it to happen to us – normal Singaporean girls!” Estelle exclaimed, as the other girls nodded approvingly. “We started out with just our pure love for anime. For us to go to the next level is extremely exciting and very hard to believe.”

The girls impressed fellow Singaporeans with their Japanese pronunciation when their first single, ‘Dream Shooter’, was released. Most didn’t realise until later that they were actually from our sunny island.

“We learnt basic Japanese mainly from watching anime,” Valerie revealed. “We’ll watch the original Japanese version and pick out certain keywords that we really want to learn, then we learn according to the English translation. We’ve gotten very used to the pronunciation from that.”

When asked to rate their level of linguistic expertise from 1-10, the group voted almost unanimously, “Just 5!”, while Wynnie’s modest side shone through when the other girls complimented her with a rating of 7 over their own 5s.

“We can understand most of it but communication wise, we’re still learning,” Beryl explained.

The group leaped at the opportunity to talk about what anime characters they like and would best represent themselves, or each other.

Off the bat, Wynnie pointed out the main character of Kaichou wa Maid-sama to Estelle, causing the latter to show off a bit of her fangirl side.

Estelle shared, “I want to be her but I want to be Sakura too! I would probably relate to the lead of Kaichou wa Maid-sama!, Misaki-chan. In school I was a prefect, and that was the point of time I joined the maid café. So when I’m in school, I’m very proper, but when I go to work I’m always go ‘okaeri’ (welcome in Japanese)”.

When it came to Wynnie, Estelle eagerly describes her One Piece fan of a band mate as a possible female version of Luffy, with the former agreeing enthusiastically and adding “or Naruto!”

The demure Beryl than speaks up, surprising even her group members with her unexpected answer. “Cagalli from Gundam Seed, although our characters are totally different, but I want to be like her because she has a very strong personality.”

Valerie took a different route with her answer, the ditzy, caring and smarter- than-she-looks “Menma from Anohana”. “But she’s more like Beryl!” she laughed.

With all the girls close to their early 20s, they talk about what they had to experience in pursuit of their dreams.

“The downside is that we have lesser time to spend with our family. Half the time we’d be in Japan and half the time we’re in Singapore, so sometimes we tend to miss them a bit,” Valerie shares.

It’s even harder for Wynnie to see her parents as she lives across the border. “Within these 3 months, I’ve been in Malaysia maybe 10 days. My parents miss me a lot so they watch my videos on YouTube every day.”

“Right now, some of us are still studying so to be able to cope with this job and studies is kind of challenging,” Beryl added.

Home away from home

The opening act of the I Love Anisong Day 2 concert, Sea☆A shared the stage with artistes like Ichiro Mizuki, who’s regarded as the king of anime music, rising star LiSA, and popular rock band Flow.

Performing at AFA also marked their official debut on home ground. Decked out in their vibrant ‘DELI-DELI☆DELICIOUS’ music video outfits, they performed their first single, which is also the official theme song of AFA 2011.

In perfect unison, the girls of Sea☆A replied cheerily, “We feel very honoured,” on their thoughts of ‘Dream Shooter’ being used as the official AFA theme song.

“AFA is where we started, so we feel really thankful for them giving us this opportunity,” Beryl added.

Almost in amazement, Valerie exclaimed how unbelievable it was to be working in the maid café one year to performing and singing for AFA the next.

“We feel like AFA is our home. We know all the staff and the organisers – they’re like our close friends and our family,” Wynnie finished, with the other members nodding simultaneously.

In addition to ‘Dream Shooter’, the girls sang their B-side track ‘Soda sound fountain’ and their second single ‘DELI-DELI☆DELICIOUS’.