Sherlock Holmes: A Game of Shadows – Game, Set and Match

An intellectually mind-boggling mystery served up with humour and quick bursts of action, somewhat like an adventure through a chessboard. 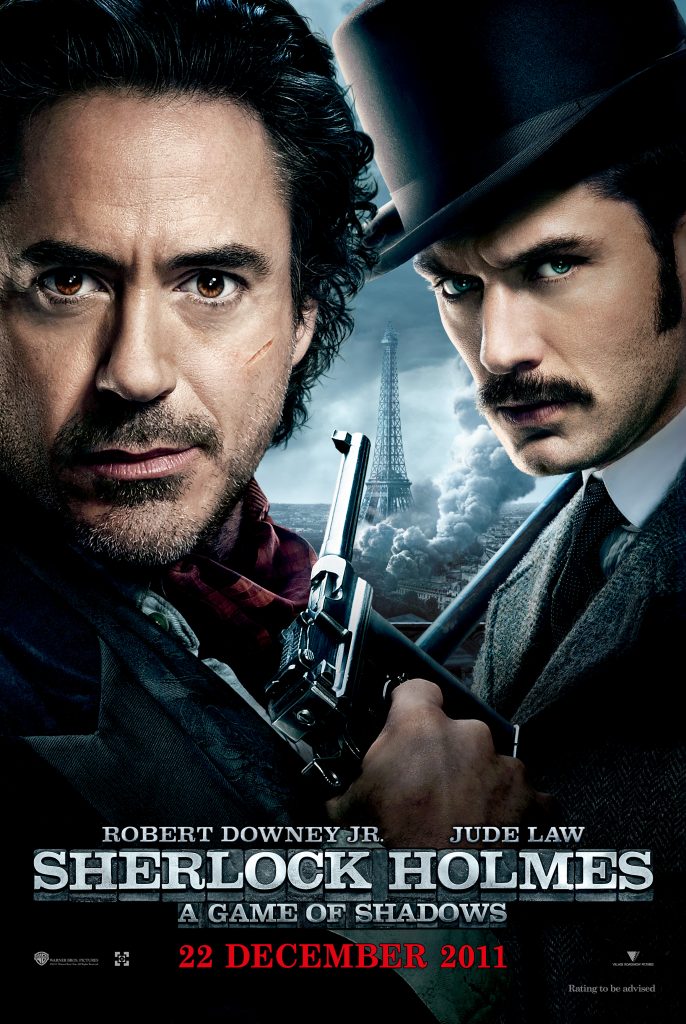 Guy Ritchie takes the helm again masterfully as director of the action-packed sequel, Sherlock Holmes: A Game of Shadows, to the successful first installment, with Robert Downey Jr  and Jude Law reprising their roles as world famous detective Sherlock Holmes and Dr John Watson. Although this film is meant to be a standalone, viewers of the first film will appreciate the recurring jokes brought over to this film from the first one.

Here, Sherlock Holmes’ world-class smarts are pitted against that of Professor Moriarty (Jared Harris), a criminal mastermind who matches Holmes on the level of intellect, but has a crueller edge over the detective with his lack of conscience coupled with the capability of performing evil misdeeds.  Holmes takes on the challenge when the Crown Prince of Austria is found dead, deducing the cause of his death as murder instead of Inspector Lestrade’s (Eddie Marsan) conclusion of suicide.

The clues then lead Sherlock Holmes to the Diogenes club, where he and his brother, Mycroft Holmes (Stephen Fry) celebrate Dr Watson’s bachelor party. At the same club, he meets Simza (Noomi Rapace), a gypsy fortune-teller who seems to know more than she’s letting on, and unknowingly becomes the killer’s next target. In exchange for his barely saving her life, and coincidentally ruining Watson’s pre-wedding night, Sim reluctantly agrees to assist Holmes on his mission. The investigation becomes increasingly hazardous, leading the trio across the continent, while the elusive Professor Moriarty proves to be worthy adversary by keeping one step ahead of the trio with a dangerous plan that could change the course of history for “Western civilisation” if he succeeds.

Also making a minor cameo is Rachel McAdams as Sherlock Holmes’ love interest, Irene Adler. All other charming aspects of the first film were brought back in the sequel, especially the comedy, such as Sherlock’s constant ‘attempts’ to harm Watson’s dog and the latter getting dragged into the investigations despite his reluctance.

Although A Game of Shadows contains influential factors from Sir Arthur Conan Doyle’s “The Final Problem”, the film comes across as an independent story rather than simply an adaptation of the book.

The acting was generally outstanding, with the main duo stealing the spotlight. Robert Downey Jr., who won the 2010 Golden Globes for Best Actor for his turn as the detective, and Jude Law stayed true to their characters especially with the former showcasing his ability to portray Holmes from different ends of the spectrum, his whimsical pranks to his intense analytical moments. Stephen Fry also proved to be a wonderful addition to the cast as Mycroft Holmes, the elder, smarter brother of Sherlock, revealing a competitive side to the calculating sleuth during the scenes of sibling rivalry.

CGI was used masterfully to add dimension to the film, such as the close up animations to illustrate the movement of the different equipment like the guns and the Matrix-styled slow motion effect to help increase suspense and to dramatise the action packed moments demonstrated best when the trio ran through the forest. Quick cuts were also used in giving the film good pacing and momentum during the action scenes that is exhibited during the fight in the pub.

A rare occasion where the sequel succeeds the high standards set by the first; A Game of Shadows brings a more compelling mystery and plotline to the table, coupled with good flowing dialogue between the characters, comparable to the first installment.

The hauntingly beautiful soundtrack is composed and produced by German film composer Hans Zimmer, the man behind the phenomenal soundtracks for The Lion King, The Dark Knight and the first Sherlock Holmes film, bringing in tracks alike the first that garnered the composer an Oscar and Grammy nomination. It creates the perfect ambience as film progresses with slow, mystifying tracks like “That Is My Curse” to highlight the dire situations and fast-paced catchy tunes like “Romanian Wind” to accentuate the mood of the action scenes.

What makes this movie a gem, apart from the good mesh of action and humourous bits, is how it stays away from the conventional deux ex machina solutions, giving Sherlock Holmes: A Game of Shadows an unexpected touch of surprise.