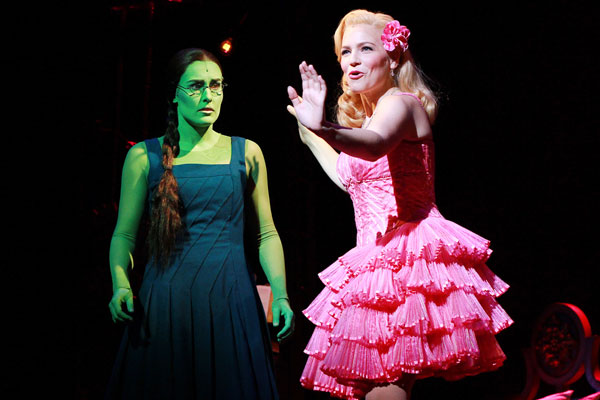 When a mere wig costs up to US$2,700 (S$3,528), more than some managers make a month, you know you’re dealing with a musical production that doesn’t stint on quality.

Indeed, the 69 different custom-built hairpieces each costing from US$1600 upwards, join over US$3 million worth of costumes on the WICKED stage, like Madame Morrible’s exquisite gowns decked out in precious stones and Glinda’s infamous 20kg blue sequined “bubble” dress. The fact that you get to see a staggering 350 different costume changes during a 2 hours and 45 minutes show also suggests a visual spectacle unlike anything we’ve witnessed here in Singapore.

Finally here on our sunny isle in the 9th year of its Broadway run, the musical production that swept major national awards (1 Grammy, 3 Tony, 6 Drama Desk, 1 Laurence Olivier and 6 Helpmann) is set to win over massive new audiences in its first staging in South East Asia.

Apart from the impressive music featured in the show, WICKED is also famous for its elaborate and intricate costumes and grand set designs.

“[The sets are] exactly what you would see in the West End or Broadway and in first class venues around the world,” Bernadette Hayes, general manager of Gordon Frost Organisation proudly announced during the media conference.

UrbanWire was privileged to be invited for a chat with Suzie Mathers who plays the bubbly Glinda the ‘Good Witch’, and Jemma Rix, the winner of Australia’s equivalent of the Tony Awards, the Helpmann Award, in her feted role of Elphaba, the green skinned ‘Wicked Witch’ just before curtains went up on their performances at the Grand Theatre at Marina Bay Sands on 13 December. 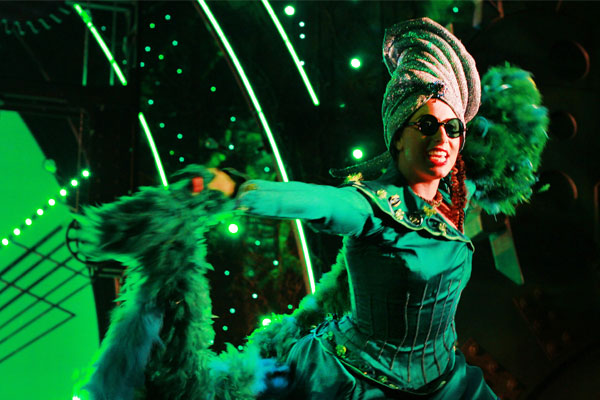 Colourful costumes aside, the most prominent cast member also had to deal with having coloured skin. “We have an hour-call to get ready. I have my hair put in pink curls (curlers to keep the hair in place) cause I wear a wig and it’s very detailed,” Jemma, who plays Elphaba, the green-skinned witch, tells UrbanWire on the daily ritual of getting made up for her role.

“My face, neck, and chest are green. My ears and my hands [are painted] to about here (gestures above her wrist) then I wear a body sock,” Jemma added. 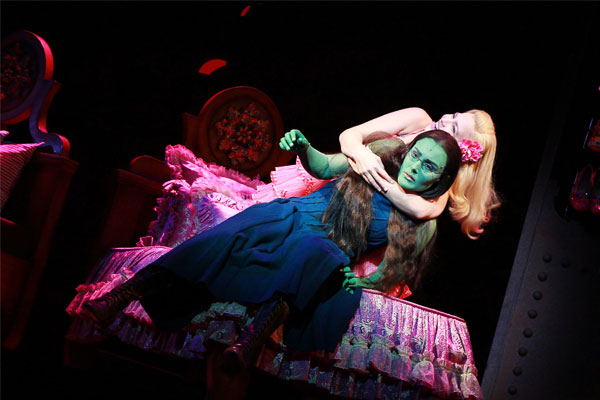 For Suzie, the key in portraying the cheerful and popular Glinda comes from her childhood experiences.

“I like to describe her as my inner child, the character when I was younger. I would close myself off in my bedroom and have my hairbrush and sing to the mirror,” Suzie explained.

Jemma, however, relies on her natural instincts while portraying the socially awkward Elphaba. “I actually find that part quite easy,” she explains, “I’m just that type of person where I’m a little bit kooky, so I love that part of Elphaba and I find that really fun to play.”

Despite playing the character for 3 years, Jemma’s passion for the misunderstood and talented Elphaba hasn’t waned at all. “I honestly think it’s because the show’s so wonderful and the character I play has so much detail. I get to sing the most amazing music that I’m still loving it and it is still a challenge for me,” she shared. “I honestly think if I was doing any other show, I couldn’t do it for this long. [WICKED] is so wonderful that I could just keep going.”

Possibly the most iconic scene in the musical is when they defy the laws of physics and take to the skies with Glinda in her bubble and Elphaba with her broom. Vocally, it’s a tricky part for soprano, as the notes themselves seem to defy gravity, that was showcased in a dueling duet between the characters of Rachel Berry (Lea Michelle) and Kurt Hummel (Chris Colfer) in hit series Glee. No less challenging for either of the witches is the apparently effortless flight.

Suzie shared, “The first time I went into the bubble, I was shaking like a leaf. I was like ‘Oh my god, what if I fall out?’ I’m only hooked in by a karabiner at the back of my dress so it’s not exactly safe.”

Elphaba’s airborne stunt, however, requires more practice despite the more secure setup, especially with her belting out her vocals while suspended metres from the ground. Jemma fondly describes Defying Gravity as her “favourite and most difficult part” with it being a spectacle to behold and a learning journey for her.

“That for me is quite a special moment and when I get my broom in the air right at the end, I hear the audience’s response back and it hits you. It’s pretty amazing and sometimes, my breath gets taken away by the response. And after all this time, I still feel this way.”

With the talented ladies electrifying the audience each night with their amazing chemistry in every scene, UrbanWire wonders if the audience reaction would be similar had the casting of their roles been reversed.

Jemma was just as enthusiastic: “I just think it would be fun to play something [that’s the] polar opposite of the character that I play. I’d probably be terrible but it would be a lot of fun.”

From Earth to Oz 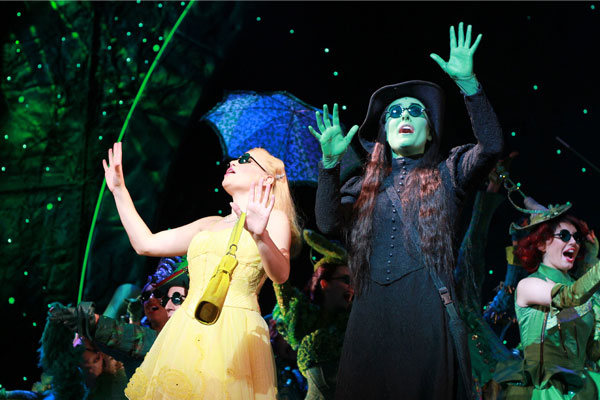 WICKED is a tale of 2 friends, Elphaba and Glinda, told with enchanting music by Stephen Schwartz. What makes the chemistry of these 2 young ladies even more palpable is the fact that their friendship was forged earlier. They were both part of the original Australian company in Melbourne in 2008. In fact, Suzie, now 27, had joined the production almost immediately, although not in a lead role, after graduating from acting school. A year-long role as the lead in Mamma Mia in the Australia touring production occupied her time before she rejoined WICKED and started understudying for Glinda’s part

“We actually shared a dressing room back in 2008, when we first started the show, so it’s been a great journey for both of us together,” Suzie divulged, drawing big smiles from Jemma.

“We first met in the audition process. It was our seventh call back or something like that, and we had to dance. The 2 of us were going ‘Have you learnt this before?”. We were helping each other and that’s how we met. It’s a very different friendship now, and we know each other a lot better,” Suzie added.