The Naked and Famous: Getting naked to be famous?

New Zealand indie rock band, The Naked and Famous performed for the first time in Singapore at the inaugural ‘The People’s Party’, a mini music festival held on 14th and 15th January this year . UrbanWire discovers that fame came as a surprise to them.

The New Zealand chart topping #1 artists and indie rock band was in Singapore for The People’s Party held on 14th and 15th January this year. They joined other bands like The Jezabels, Metronomy, Bombay Bicycle Club, and a few other bands from Europe and Australasia. Local acts like The Analog Girl and Monster Cat also performed.

Since the release of their first album, Passive Me, Aggressive You, in late 2010, the band has performed in over 180 live shows, as well and earned 6 nominations in the 2011 New Zealand Music Awards, including Best Group and Album of the Year. The album also spawned the hit single, “Young Blood”, which debuted on the New Zealand chart at number 1 in 2010.

Like many indie alternative-rock bands, their musical styles draw heavily from a wide range of genres, from heavy rock, to electro pop and folk. Consisting of lead vocalists Thom Powers and Alisa Xayalith, synth player Aaron Short, bassist David Beadle, and drummer Jesse Wood, The Naked and Famous has taken a leaf out of the book of  fellow homegrown kiwi band The Mint Chicks’ and adopted a very ‘do it yourself’ attitude in terms of having their own control, ideas, and direction for their band.

All eyes on the band

The band believes in giving the duo complete freedom in directing and conceptualising their videos.

Speaking with UrbanWire, Alisa Xayalith chuckles, “They say ‘I want you to wear this thin dress and go running in snow, go!’ It’s really exciting working with those guys and they have a great music synergy between the music and the individuals.”

With a number of their songs being featured on several popular television serials like The Secret Circle, Chuck, The Vampire Diaries and Gossip Girl, avid TV junkies are no strangers to the band’s tunes. The Naked and Famous hopes to be a pop cult band one day and deems the term flattering for them.

“The great thing about TV shows is that they expose you to various music, not necessarily through radio. That’s also a great way for bands to be heard of. But being featured on TV shows is one of the other ways that bands can make money and sustain that kind of living that they have because of the decline of record sales,” Alisa adds hopefully.

“Although New Zealand has record labels, rock bands and the same sort of rock and roll history, it is still very isolated because many of the local artistes do not get as much exposure. So what we’re doing right now is a first and it’s really bizarre,” adds Thom Powers.

When asked if there are any musical concepts the band has planned for their next album, Thom enthusiastically replies, “Yeah, jazz fusion and dubstep!” Aaron jokingly chimes in, “Deathcore!” 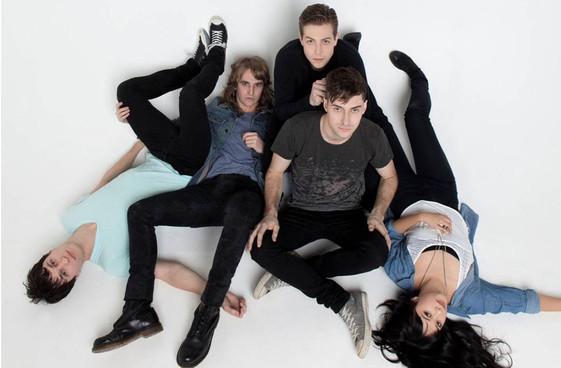 Having only released just one album, the band’s growing popularity might come as a surprise, although Thom humbly adds that it’s not uncommon among modern indie bands. The lead vocalist went on to say, “On one hand it’s incredibly surprising and bizarre, but there’s a certain amount of stuff that we can try and work towards. You can only do so much as a band for your music but it’s really up to listeners to justify how well a band does.”

Social networking has also played a huge part in the band’s popularity and ability to connect with their listeners. Facebook and Twitter, for one, are such social networking sites the band uses.

Thom said, “It is much more real than doing interviews with journalists. To us, it is more like an interpretation of someone giving an honest account about something, which makes it more intimate because you can’t really explain the aspect of your entire music culture topeople, whereas the one on one for social networking allows us to get people’s personal accounts that is much more real to us and they can say what they want, which we feel is fantastic.”

It seems The Naked and Famous are also flattered by what their fans do for them. Making band t-shirts and compiling snippets of their live performances into videos has touched Alisa greatly. She said, “I just found these fans to be creative, thoughtful and genuine and those are the kind of people that really cherish music.”