LETTICIA CHIA shows you the best way to satiate your Hunger Games obsession while counting down to the movie’s release.

Voted the most anticipated movie of 2012 in a MTV poll, The Hunger Games is spawning a fever that’s virally contagious. With its wide fanbase,it’s not surprising that the successful book trilogy by Suzanne Collins has been dubbed “the next Harry Potter” by many fans and The A-List.

The book series follows main character Katniss Everdeen who lives in the fictional world of Panem, where citizens are split up into 12 districts depending on their social and living standards.

Each year, 2 young tributes, a boy and girl between the ages of 12-18, have to be surrendered by each of the districts to participate in the Hunger Games. This is a televised gladiatorial tournament held by the iron-fisted Capitol where the youths battle to the death. Thus when her sister’s name is drawn to be in the games, 16-year-old Katniss Everdeen steps forward to take her place, marking the start of the popular series where the only rule is kill or be killed.

If you can’t shake your excitement for the movie adaptation due in theatres in March despite constant replays of the teaser and the movie trailer, here are some ways fans of the series have come up with to fuel their own passion for the games.

Note: None of the highlights are spoiler-free. 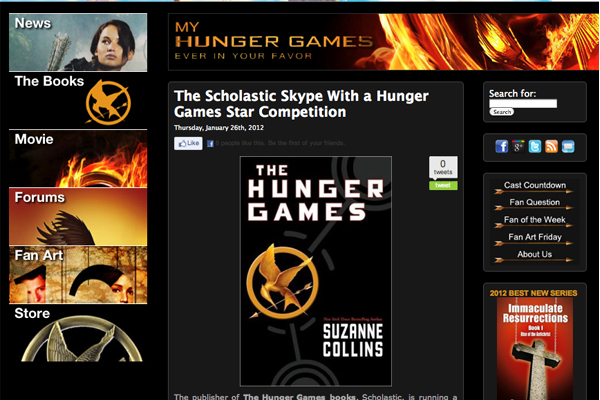 Who better to get information about the book series from than the experts themselves? Anything and everything from The Hunger Games is on the fansites.

One that updates on a daily basis is MyHungerGames.com. Run by a team of 6 dedicated fans, and featuring a variety of features and updates about the books and movies. Nifty features include their Cast Countdown (which introduces main members of the cast and discusses their potential portrayals), interactive fan art and fan of the week.

“Believe it or not, the first site I found was ours, MyHungerGames.com,” revealed 26-year-old Summer Ronso, one of the admin members of MyHungerGames who creates the fan questions of the week and updates the fan art of the week. She shares with UrbanWire her continuous passion for the series and her site, “I pay attention to DWTC (Down With The Capitol) and The Hobbut my main inspiration (for the fandom) will ALWAYS be our site,”

Another admin of MyHungerGames, Hamilton Whitney 26, shared with UrbanWire his most memorable posting for the site, “One of the first posts I made was a detailed analysis of the first full Hunger Games trailer. I really love that type of in-depth analysis and it helped that it was a really great trailer.  I got a lot of positive feedback on that one and it was fun to write.” Read that article here. 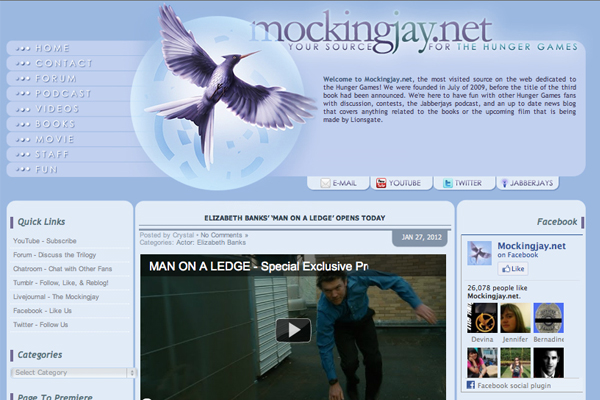 Another fan site with daily updates is Mockingjay.net, named after the trilogy’s iconic fictional creature, the Mockingjay bird. The site links to videos and podcasts and various other segments related to the series but Mockingjay.net largely concentrates on news related to casting, the upcoming movie and cast interviews. The site’s manager Kimmy West also composed her own tune that resulted in a haunting rendition of ‘The Hanging Tree’, a song that appeared in the last book of the trilogy.

A group of 5 people, better known together as Mainstay Productions, created some astounding video clips based on the story and characters by Suzanne Collins. Their most viewed works range from a depiction of one of the iconic scenes from the first book with Katniss and her ally Rue with over 2 million views, to a series of short films with a collective of over 800,000 views telling the beautiful backstory of a fan favourite couple, Finnick and Annie.

“I love how they gave life to Annie and Finnick’s backstory with such a moving short. It looks so professional, I initially thought it was an official release!” shared Toh Xin Hui, a 19-year-old student who is also a recent convert to the series.

MyHungerGames’s admin Summer Ronso agrees with the fanmade visualisation, “I absolutely love all of the fan created videos and art work. Everything from the small things shot on people’s cell phones to the productions of MainStay Pro. It just shows how much the series has affected the readers, and how much they want to bring it to life.”

It’s almost a universal truth that there there are fans, there will be those who enjoy mocking that which is cherished. One of the most popular parodies is by WinterSpringpro, and it brings out the comedic elements of each character to the tune of Britney Spears’ ‘I Wanna Go’. The video plays with the love triangle between the main trio, Katniss, Peeta and Gale, while exaggerating each character’s most memorable traits to comic effect.

“This video just took me by surprise how they portrayed their characters. It doesn’t hurt that the song is so catchy that I catch myself singing along,” revealed Sharon Lim, a 20-year-old student and fan of the series.

Another notable spoof is something entertainment website Crushable.com calls ‘The Best Hunger Games Parody Trailer We’ve Seen’. By Evil Iguana Productions, the video reproduces scenes shown in the official trailer but with a twist! Fans of the series will appreciate the humour injected into the scenes that once inspired tears in the original trailer.

To make sure you get your weekly dose of what’s happening in the world of Panem, tuning in to Fireside Chat is a good idea. The podcasts are run and hosted by Savanna and Adam. The duo releases weekly episodes that cover everything Hunger Games related, from providing updates on major news and announcements to more laidback recurring segments like ‘Crackpot Theories’ and ‘Cave/Marry/Kill’ while incorporating their commentaries and guest speakers as well.

On what was the defining moment that pulled them into the fandom, Savanna told UrbanWire: “Honestly, from the moment I cracked open The Hunger Games, I was pretty much hooked. I had never read anything quite like it before, and I found myself instantly sucked into the dystopian society that Suzanne Collins had created.”

Her affection for the trilogy proved infectious, as Adam admits, “Harry Potter fans kept coming up to me and saying I HAD to read The Hunger Games, so naturally I was curious to find out what made this series so amazing. Then Savanna read it and basically laid down the gauntlet that I MUST read it. Well, I did, and it was life changing. So yeah … Savanna was the deciding factor. Thanks, Savanna!”

With over 40 episodes since the pair’s beginning in April 2011, there are a couple that proved particularly memorable.

“There are 2 that really stand out above the rest. Early on, when casting decisions were being made, Lionsgate announced that Lenny Kravitz would be playing Cinna [a character in the series] DURING our show. It led to a remarkable moment of screaming and gushing, which we’ll never forget. The other would have to be the second-by-second breakdown we did of the Hunger Games trailer, which aired the night it came out. We all absolutely adored that trailer, and analyzing it so close only further proved that to be the case,” the duo shared. You can listen to these podcasts LIVE every Monday at 10pm ET (10am, Tuesdays in Singapore).

Add some fire to your existing rotation of The Hunger Games music, possibly consisting of ‘The Hanging Tree’ renditions and ‘Safe & Sound’ by Taylor Swift and The Civil Wars from the official movie soundtrack, with some beautifully crafted tunes based on the series.

Following the footsteps of Wizard Rock (wrock), songs about Harry Potter, comes the music about The Hunger Games, also known as Rockingjay. Alex Carpenter, a popular YouTube artist, best known for his work in wrock band The Remus Lupins crafted his own EP record on the trilogy. Titled Freedom in Panem, the EP of 5 songs takes the listener through a musical journey of mockingjay Katniss Everdeen. 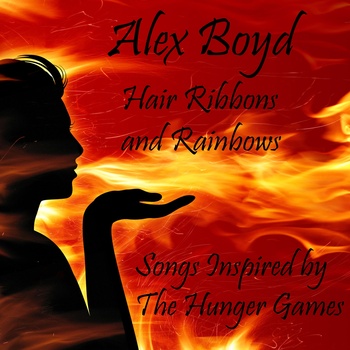 Another album dedicated to the music of the games, is by fellow wrocker Alex Boyd, also known as The Lone Gunman on the Internet. He released Hair Ribbons and Rainbows, with 13 tracks and some beautiful artwork that reminds listeners of the girl on fire, all inspired by The Hunger Games.

For more Rockingjay, check out this podcast by Fireside Chat that features more talented individuals and their music.

Photos are courtesy of the respective websites.