With an expected growth of 1 million players from SEA within the first year, CEO of Wargaming.net, Victor Kislyi, announced customised features for the SEA market, including offering low latency servers for gamers who previously struggled with lag while connecting to US servers. The regional version of the game also offers local language options alongside English, such as Mandarin, Tagalog, Malay or Thai. Localisation of the game also means support services, as well as convenient payment options.

“The Asian online gaming market is more mature compared to Europe and the US,” commented Kislyi. “We will take a different approach to engaging our players and there will be live events and tournaments for players to meet and compete.”

And such in-game special events will even be centered around highlights of the calendar in our part of the world such as Chinese New Year.

A niche game targeted at World War II enthusiasts and anyone interested in blowing tanks up with other tanks, this free-to-play game is easily accessible by anyone who enjoys strategy, heavy weaponry, huge tanks, and lots of explosions. Simple as that seems, Wargaming.net’s formula seems to work, with over 24 million players worldwide from China, Russia, North America and Europe. 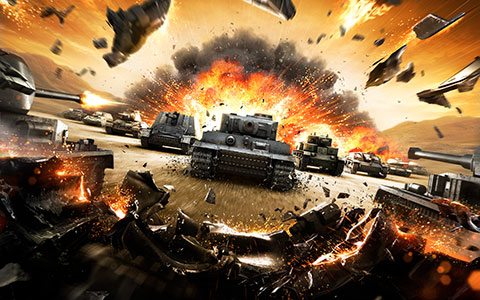 Photo courtesy of Wargaming.net
With over 150 different armoured vehicles to choose from, gamers can choose from the fast and agile light tanks, versatile medium tanks, powerful but slow heavy tanks, as well as the incredibly dangerous tank destroyers. All of the classes of tanks have their pros and cons, naturally, and the type of tank chosen usually depends on the team’s strategy. 15 players on each team face off every round in a randomly generated map, with terrain ranging from the icy Arctic Region to the lush greenery of Westfield, with each map requiring different methods of attack. Winning the game requires one to either capture the enemy’s base, or the more enjoyable option of completely destroying all 15 enemy tanks.

Each round typically lasts for 5 to 15 minutes, with gamers playing an average of 30 battles per day (3.3 hours). The game’s touted as addictive and UrbanWire can see why. There’s a certain sense of satisfaction that comes from out-thinking, out-maneuvering and out-playing your opponents, and the heavy weapons you control only serve to make the experience sweeter, with sound effects like shells whistling through the air and huge columns of fire and dirt erupting all around the player all serving to make your gaming experience ever so realistic.

The game’s simple to pick up compared with other MMOs like Aion and League of Legends, which require a huge amount of technical skill and knowledge to play. In World of Tanks, all one has to do is to use the WASD keys to move your tank around, with aiming and shooting controlled by the mouse. So straightforward, in fact, “a 6-year-old could play it,” according to Kislyi, though admittedly someone so young will have difficulties coping with the strategies and tactics required in this intense war game. Indeed, the average player is from their early to mid-30s though the game is perfectly playable by any teenager.

Regardless of age, World of Tanks is a game that appeals to anyone who enjoys historical war battles filled with strategy and tactics like the Age of Empires or Medal of Honour series. And tanks.