Ben & Jerry’s Singapore takes a step away from sandwich tradition

The ice cream sandwich is a long familiar concept in balmy Singapore, but instead of thin wafer biscuits surrounding a small block of ice cream cut from a paper box, Ben & Jerry’s Singapore gives us a more substantial treat. 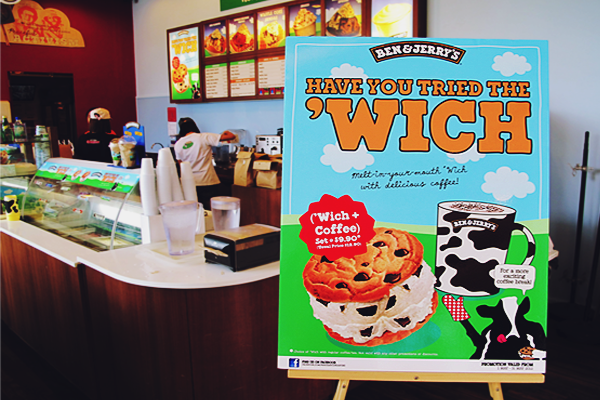 Their all-new ‘Wich ($8.90) is a delightful combination of 2 large chocolate chip cookies with a serving of Ben & Jerry’s ice cream in-between.

Not only is this novel dessert sure to entice the young at heart, it’s also a “great alternative to eating ice cream off a cone or cup”, says Kenneth Lau, Ben & Jerry’s Brand Champion.

With the entire range of Ben & Jerry’s 19 delectable flavours as possible fillings, you’re likely to break into a sweat just from narrowing it down to one for your ‘Wich. Anticipating this dilemma, the good people there have come up with the ‘Wich wheel that you can spin to leave the choice of your flavour to chance.

The crumbly cookies are baked daily on-site at the shops to ensure optimum freshness, although their cookie batter, made exclusively for their brand, is imported from the United States. Generously sprinkled with gooey little chocolate nuggets, they’re larger than the ones sold separately in the scoop shops. The ones used to construct your own ‘Wich closely resemble those at Subway in terms of size at 9cm in diameter.

With 2 sizeable cookies and a generous scoop of ice cream in-between, the ‘Wich does indeed make a filling treat. It’s a good idea to share it with friends especially if eaten as a post-main course dessert. Better yet, grab a couple of adventurous companions (we wager that they’re not going to protest) and be experimental with your ‘Wich combinations to find out which flavour you like best. 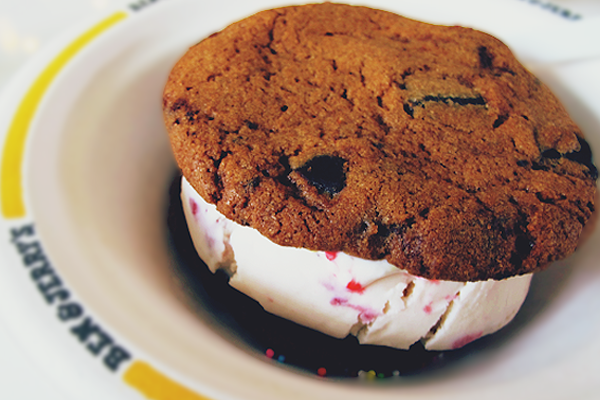 Be warned, however, it can get messy. They serve this in a bowl for a reason: The ice cream tends to melt before it’s finished. Also, the cookies are a bit tough to bite off sometimes. To make things easier and neater, UrbanWire recommends you eat the confection layer by layer with plenty of wet wipes by your side.

“I love cookies and ice cream so I doubly love the ‘Wich. It satisfies my sweet tooth,” says polytechnic student Tan Siew Kiang, 19.

Just for the month of May, Ben & Jerry’s are offering promotions to celebrate the launch of ‘Wich. For those who’re looking forward to having it as a teatime snack, just add an extra dollar to enjoy a cup of hot coffee along with your ‘Wich. They also have a Facebook gamewhere you stand to win coupons to offset the price of your ‘Wich.

Aside from their wide array of ice cream flavours, Ben & Jerry’s is also known for giving back to the community. Apart from their annual Free Cone Day that we have been reminding you about, they’re also supporters of Fair Tradeand intend to become fully Fair Trade by 2013. So you can enjoy your ‘Wich knowing that the farmers of the coffee beans in your Coffee, Coffee, BuzzBuzzBuzz ice cream have been paid equitably and not exploited. That good deed should assuage your guilt for consuming such sinfully delightful treats.