A street-style competition celebrates individuality and fearlessness after reaching 70,000 students.

With intricate, baroque-inspired stickers on his eyebrows and wacky accessories to match his printed pants and self-designed tunic, quirky 19-year-old Anzahari Taib was crowned most fashionable in the Fashion Feud faceoff on June 9. The Temasek Polytechnic student won over the hearts of the judges and attendees with his experimental and fun approach towards fashion and walked away with over S$1000 worth of prizes.

Organised by local street style website, Poshism, the inaugural contest reached over 70, 000 students from all 5 polytechnics in Singapore and had them post photos of themselves or theirfriends rocking their most fashionable outfits on Poshism.

Felix Loo, the 20-year-old managing director of Poshism, shared with UrbanWire, “The idea of Fashion Feud was built on the fact that as polytechnic students (almost all in the Poshism team are), we always had this sort of feud between our polytechnics, always proclaiming that ours is the best.”

With that in mind, Fashion Feud is Poshism’s way of getting polytechnic students to slug it out and prove once and for all, on the polytechnic that has the best-dressed student. 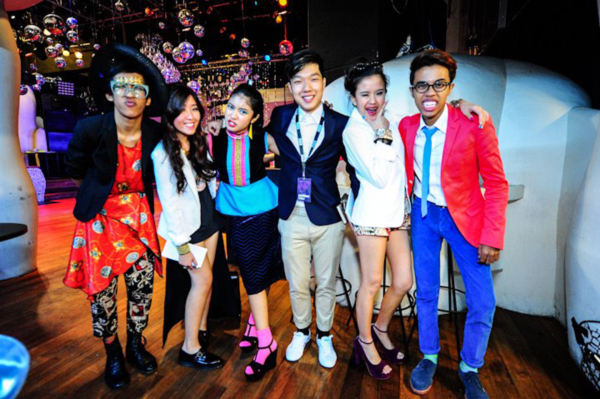 The 5 finalists with Poshism’s Managing Director, Felix Loo (fourth from the left)

Elizabeth Yong, Faris Salehan and Rachel Ong from Republic Polytechnic (RP) and Nabilla Syazwani and Anzahari Taib from Temasek Polytechnic (TP) were eventually revealed to be the top 5 contenders with the strongest looks among the 400 looks posted under the contest. Each of them garnered more than a 1000 votes for the looks that they submitted on Poshism. 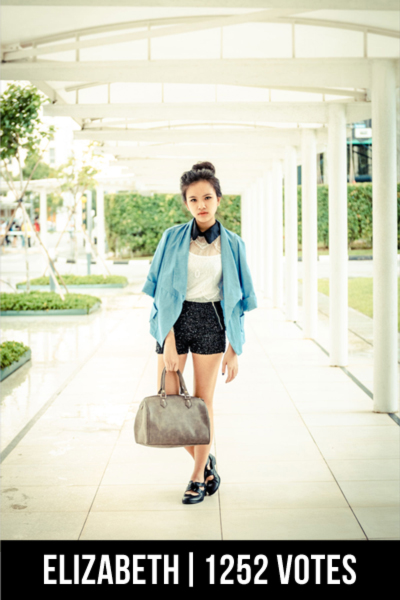 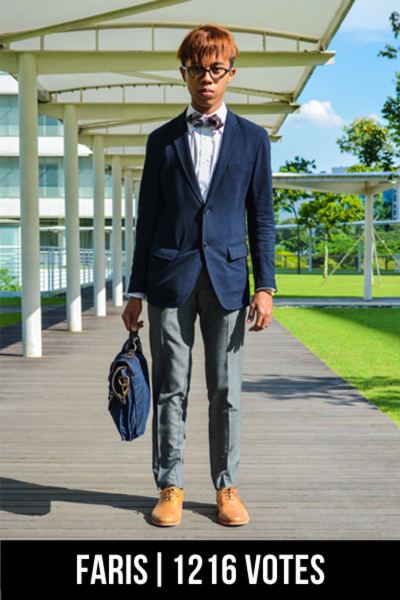 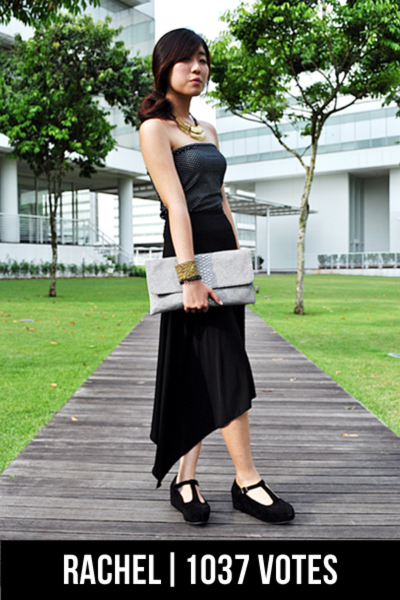 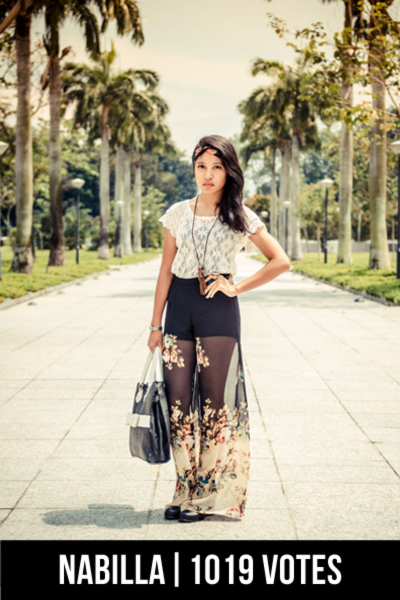 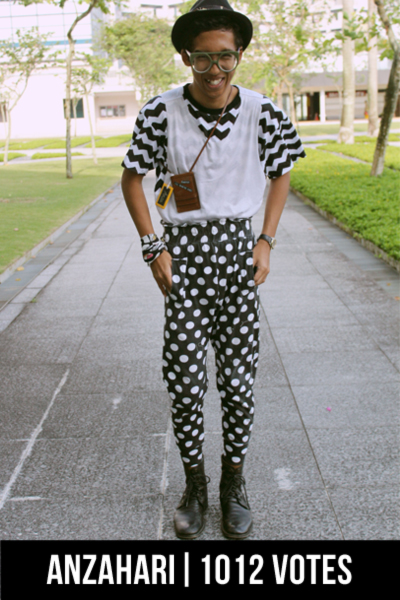 These looks that landed them in the final round may have turned heads, but all finalists upped the ante at the finale, to the thrill of some 500 attendees who turned up to cheer the contestants on at Zouk.

Even the attendees stepped up that night as the gentlemen put their best foot forward in their trendy kicks and the ladies strode in their heels. UrbanWire was heartened to note that Singaporeans are straying away from their default colour of choice (black), and are getting bolder as bright neon colours and colourful prints seemed to be the popular sartorial choice among the youths that night. 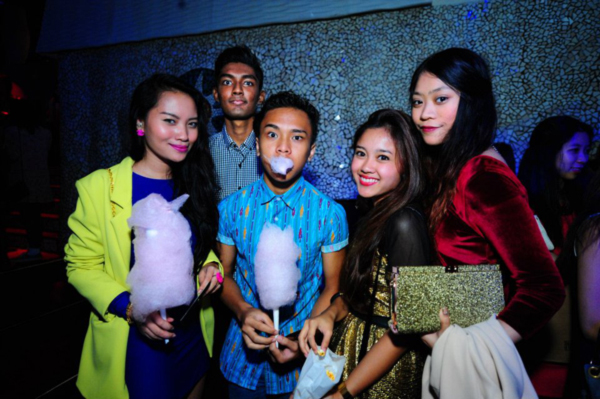 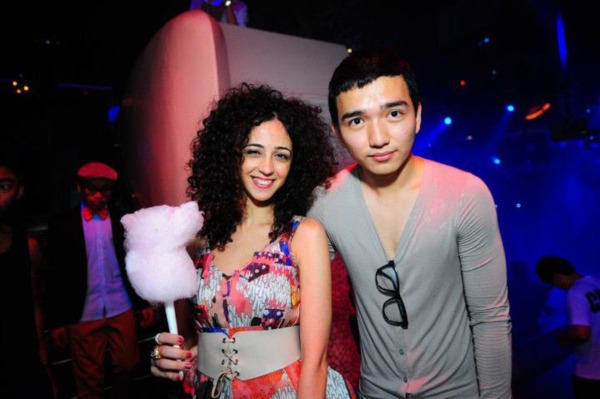 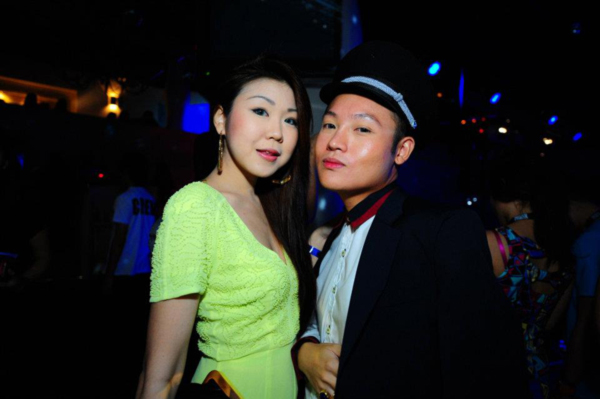 Getting the crowd all hyped up were hosts for the night, Divian and Jacqui, radio deejays from 987FM who were adequately dressed to impress although UrbanWire was expecting to see more spunky style from the sassy Jacqui. 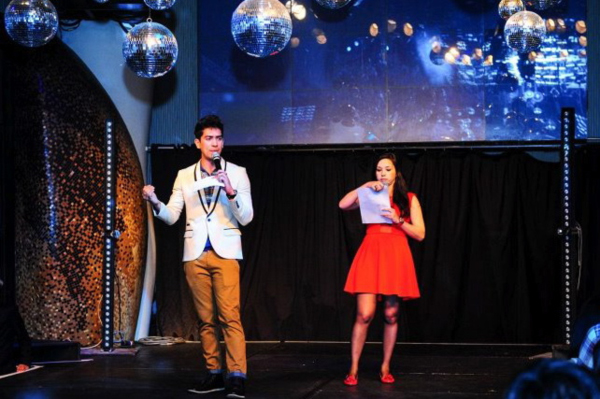 Judges for the night were: 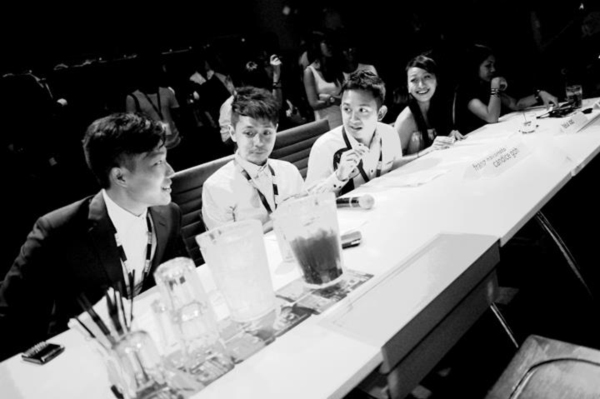 Loo explained that the judging criteria consisted of equal parts “style, confidence, creativeness and adherence to the theme”.

Dressing according to the predetermined theme, ‘Statement’, each of the contestants had their unique statement to make as they worked the stage.

Opening the show was Elizabeth, who confidently strutted down the runway and raised some eyebrows in a bold get-up consisting of a sheer, textured black top, a white blazer and baroque-inspired shorts. 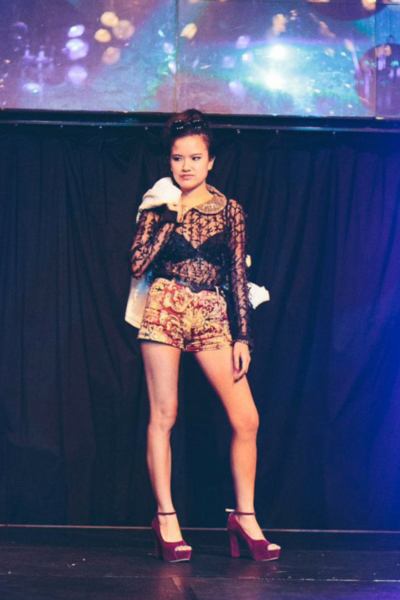 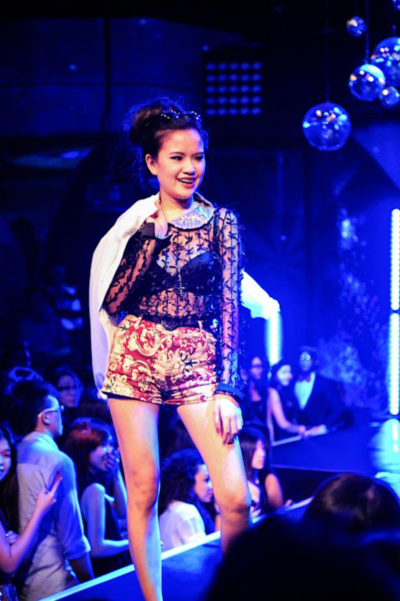 Her see-through blouse prompted Divian to comment, “Your outfit is very revealing,” and Jacqui had to rein in her partner, cheekily warning him to keep his eyes up!

Visibly unaffected by the comment, Elizabeth says she doesn’t care what others might think about her outfits since she dresses for herself. Describing her style as bodacious, Elizabeth tells UrbanWire that she draws inspiration from local fashion bloggers like Melody Tan of Missing Avenue, and Hosanna Swee of Wardrobe Flux, who was present at the event.

A frequent Poshism user, herself, Swee tells UrbanWire she feels honoured to be one of Elizabeth’s style icons.

Snazzily dressed Faris was next to appear and he drove the crowd wild the moment he emerged from behind the curtains.

Beaming with delight, he struck poses for the cameras in a bright red blazer and talked to UrbanWire about his supportive friends, saying, “My friends actually created a Whatsapp group to discuss about my outfit for the finale.” 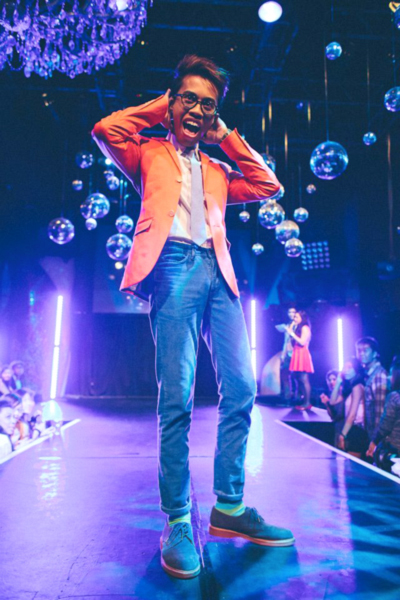 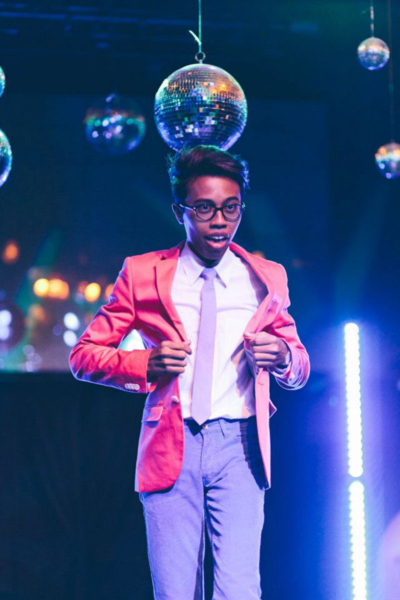 With friends like that to cheer him on, taking on the limelight was simple. Faris exuded the same laidback confidence on stage as his style inspiration, Ellen Degeneres, whom he admires for her relaxed, casual style.

If Faris was all about the swagger, then Rachel was the edgy youth who chose brogues over heels. A coursemate of Elizabeth and Faris, the final-year Customer Relationship and Service Management student made a savvy sartorial move by wearing an asymmetrical black skirt that flowed behind her as she glided down the runway. One of the judges, Candice Goh, sung praise of this elegant number. 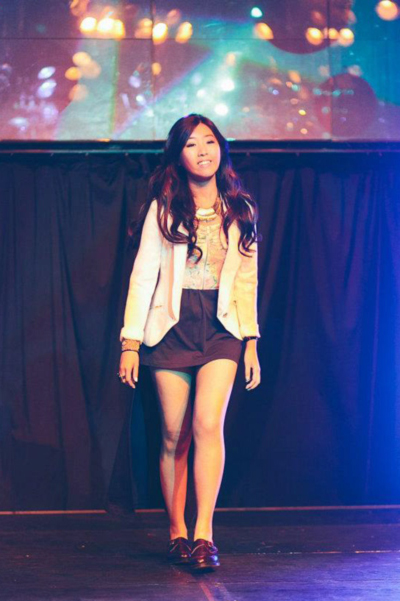 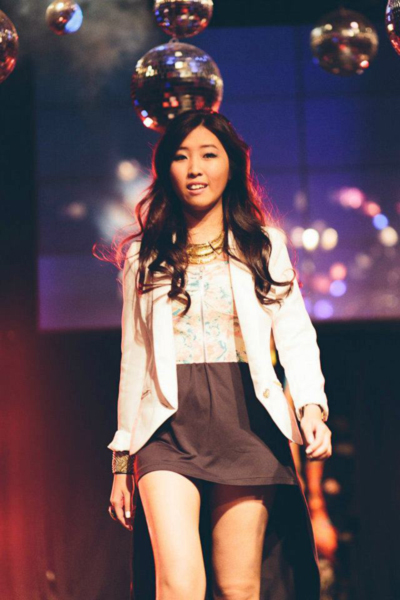 Rachel, whose outfit choice is usually dependent on her mood, looks to online fashion blogs and people on the street to be inspired.

Right on trend in her self-designed peplum top for the finale was Nabilla, an Apparel Design and Merchandising (ADM) student. Her daring move in wearing her own creation inspired Swee to say, “I love how experimental she is.” 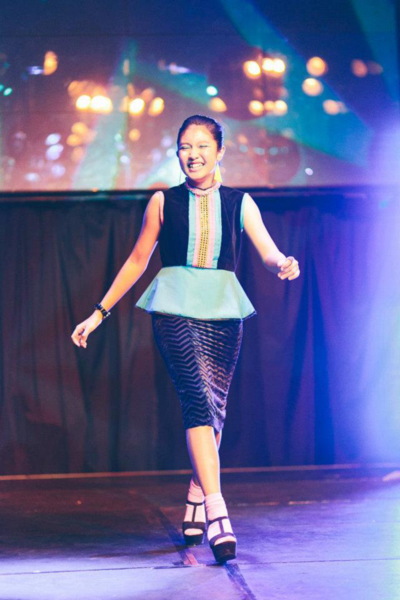 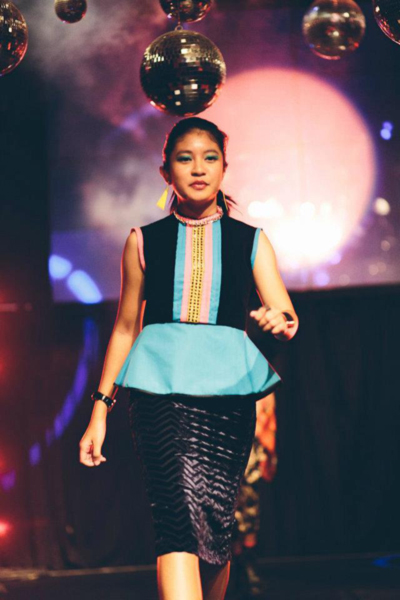 While Nabilla confesses that she is shy, no one could have possibly detected that as she sashayed down the stage, fiercely confident with her hands on her hips. This is certainly not the last you’ll see of her in the fashion scene as she intends to become a fashion buyer.

Anzahari was clearly a crowd favourite, bringing the house down as he danced down the runway in a silky tunic he designed himself. 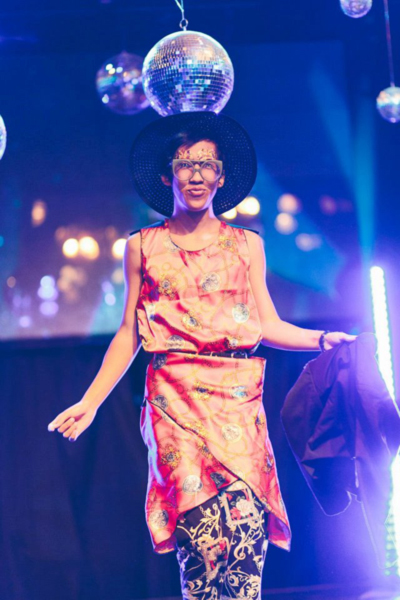 Close friends and classmates, Nabilla and Anzahari supported each other throughout the contest. Moments before they took to the stage, Nabilla was still offering Anzahari style advice on his ensemble.

Similar to Nabilla, he grew as a person through fashion. Describing himself as an insecure boy during his childhood, Anzahari credits fashion for prying him out of his shell and helping him “gain self-love”.

The mutual respect between the two was obvious as Nabilla gushed about how inspiring Anzahari is. “Every day he comes to school in something different. Even if he is wearing the same clothes, he always mixes it up with something else.”

Mixing things up that night, Anzahari had on some wacky stickers over his eyebrows to match his baroque-inspired pants. His inspiration for the eyebrow art came from Christian Dior’s Fall 2011 Couture show, where all the models sported some cool eyebrow decorations. 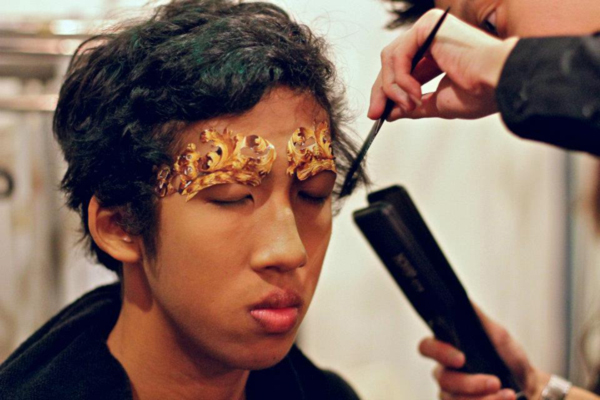 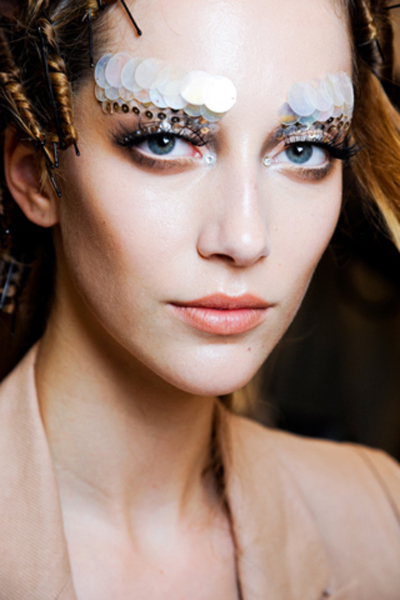 Anzahari says, “I always treat my body as a medium to project my interests, so most of the time I’m wearing something that resembles what I love.” 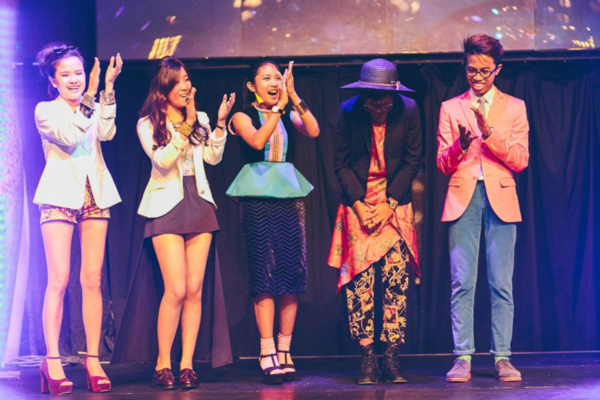 There was definitely no signs of feud as the gracious finalists applauded for Anzahari when he was announced as the winner.

Anzahari won S$1000 cash, a one night stay for two at Hotel Re! and a pair of limited edition Zouk x Feiyue kicks and is now a SingTel Youth Ambassador.

Rachel won S$500 cash, a S$100 dining voucher at Hotel Re! and a pair of limited edition Zouk x Feiyue kicks and is now a SingTel Youth Ambassador.

Elizabeth won S$300 cash, a S$100 dining voucher at Hotel Re! and a pair of limited edition Zouk x Feiyue kicks and is now a SingTel Youth Ambassador.

Nabilla and Faris both won themselves S$200 cash.

With his off-kilter outfit, Anzahari made it clear that he was fearless in expressing himself through fashion, and won the judges over. His win was such a testament of his dedication to fashion that his victory dance on stage was certainly heart-warming. 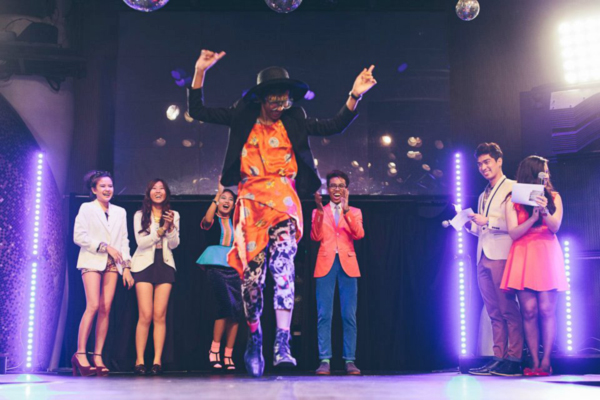 One of the judges, Franz Navarrete, believes that Anzahari will inspire his peers to be just as creative and resourceful, especially with the Do-It-Yourself element. He added, “I want youths to be creative and realise that they don’t have to buy expensive clothes to be stylish.”

That said, UrbanWire is impressed with everyone who participated in Fashion Feud. In the words of a local street-style blog, Street Peek, “you are all winners.”

If you missed out on this year’s contest, which ran from April 30 to June 9, keep your eyes peeled for next year’s. Wehear that Fashion Feud just might be an annual contest!