Rebirth of Maroon 5 with Overexposed 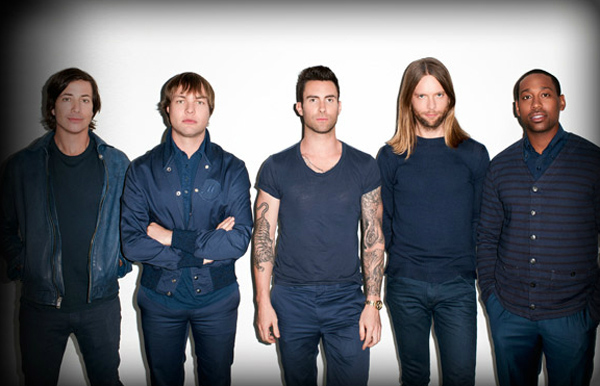 The alternative-sounding sleeper hit sold 2.7 million copies then, propelling the band into the epicentre of the international music scene. Fast forward 10 years to Jun 26– just a day after the 10th anniversary of Songs About Jane – and M5 has given us their fourth and latest studio offering, Overexposed. A distinct departure from their former sound, this new record ventures into a poppier, clubbier direction, which may not please fans who love the soul-influenced style that is (or rather “was”) signature of the quintet.

To that lead singer Adam Levine had this to say to MTV News during the music video premiere of “One More Night”: “Songs About Jane was alienating a certain amount of our fan base back then, and if we’re not alienating a small percentage of our fan base every time we make a record, we’re doing something wrong.”

“And usually, I find that people who complain about wanting that original sound would be the same people where, if you had a record that sounded like the first one, they would say, ‘Why don’t you guys branch out and change a little bit?’… Deal with it. Come with us on this journey or bye!’” he added.

“Moves Like Jagger” marked the first time the band worked with co-writers on a track, but success can be so addictive, which is probably why all the tracks on Overexposed, have had help from others in the writing and producing. Hit-makers Max Martin (“Dynamite” by Taio Cruz) and Benny Blanco (“Tik Tok”by Ke$ha), as well as OneRepublic frontman Ryan Tedder were all roped in to be a part of a long list of heavyweight collaborators, in an unabashed pursuit to retain the mass appeal and attention that the band enjoyed with “Jagger”.

“In a way, we’ve had a rebirth,” Levine acknowledged in an interview with Rolling Stones. “Now, we thought we should see where this goes – why not? We can’t keep doing the same thing forever. At this point, we want to be a little bit scared.”

Aptly named, Overexposed is a tongue-in-cheek allusion to the band’s stratospheric success with “Jagger”, together with Levine’s ubiquitous presence in the media of late, having been catapulted to a greater fame, largely due to his stint as a judge-cum-coach on NBC’s hit reality talent competition, The Voice.

Bursting with a kaleidoscope of colour and imagery, the trippy album artwork features a Picasso-inspired collage of cartoonish drawings but UrbanWire feels it could have been more tastefully executed. 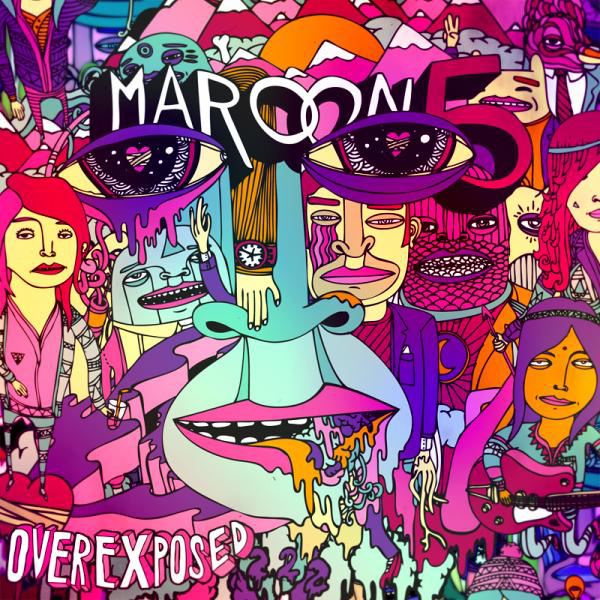 No stranger to the airwaves is the lead single of this album, “Payphone”, which quickly established the Los Angeles-based group’s change in musical direction, featuring a collaboration with rap superstar Wiz Khalifa. After debuting the live performance of the undeniably infectious tune on The Voice (US), it got off to a blazing start, garnering the top spot on the Billboard’s Hot Digital Songs chart with 493,000 downloads, breaking the record of the best sales week ever for a digital song by a group. Produced by Shellback and Blanco – the same duo that brought us “Jagger” – the track is about a romantic relationship gone astray, successfully showcasing Levine’s soulful vocals. That said, UrbanWire prefers the version without Khalifa’s rap verse, which feels contrived. 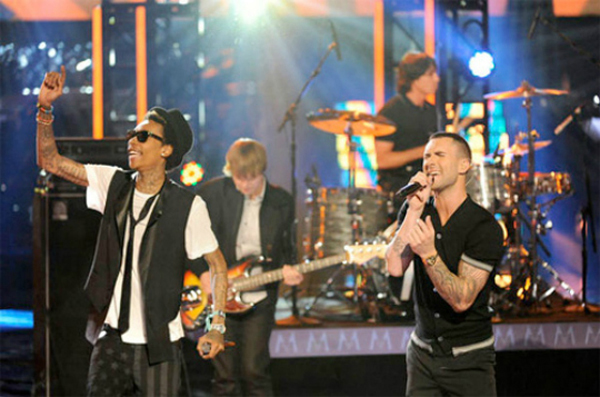 Much like its performance on the charts, the highly-anticipated music video to “Payphone” is explosive literally. Pulling out all the stops, it consists of a bank heist, a high-speed car chase and plenty of jaw-dropping explosions, allowing Levine to “live out his childhood fantasy,” he shared with ENews. While skillfully shot, sadly the Michael Bay–esque footage does little in capturing the essence of the song. 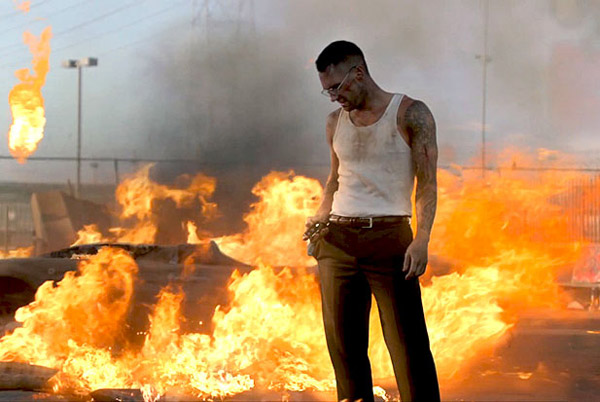 The follow-up single to their pop-rap mesh is “One More Night” – a funky number with reggae-infused tones. It’s hard not to catch this earworm from the get go, making it a great opener for the album. The accompanying music video is helmed by cult hit series “Friday Night Lights” director Peter Berg. It presents a simple story: a professional boxer, Levine experiences plenty of success in the ring, but struggles to keep up on the personal front, as he inadvertently neglects to provide for his family. Featuring stunning actress Minka Kelly  – who previously worked with Berg on “Friday Night Lights” – as the video vixen, it poses the notion that love is a battlefield – or boxing match, in this case.

This music video stands as a stark contrast to Payphone’s; where the latter is a big-budget high-production mini-action flick, this one has a more subdued, “indie film” style. 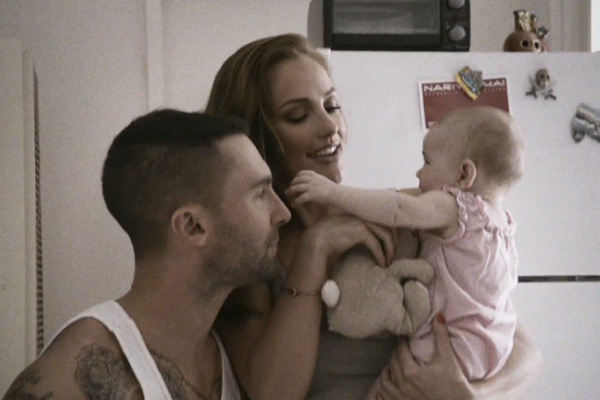 Maintaining the strong start to the album, “Daylight” is an easy listen of the soft-rock variety. “You have those moments in the studio when you finally stumble onto something special,” Levine said of his favourite track on the LP, in an interview with MTV News. Lyrically, it laments the morning after a one-night stand, but music-wise, it exudes a “feel-good” vibe, with Levine’s soaring “woah-ohs” on the chorus resembling the vocal stylings of British alternative rock band Coldplay’s front man, Chris Martin.

Dance floor jam “Lucky Strike” picks up the energy of Overexposed. James Valentine’s lead guitar opens the track, but a pounding bass and synthetic dance beat are quick to drown him out. While this auto-tune-aided number is undoubtedly Top-40-friendly, it may come as a shock to long-time fans, seeing it’s a complete step out of M5’s comfort zone and into a territory that is clearly reminiscent of electro-pop band Cobra Starship’s material. It’s surprising to note that OneRepublic’s Ryan Tedder manufactured this hard-hitting track; UrbanWire expected a milder result to have transpired out of the collaboration, à la Leona Lewis’ “Bleeding Love” and Beyonce’s “Halo”, where those 2 Tedder-assisted tunes are mid-tempo ballads led by his trademark percussive beat.

The other song that recruited Tedder’s producing prowess is “Love Somebody”. It’s easier to recognize his influence here with a chorus backed up by piano. The lyrics are a generic, carbon copy of any other pop song out there right now – think Justin Bieber’s “Somebody To Love”; Levine sings, “I really wanna love somebody/ I really wanna dance the night away. I know we’re only half way there/ But you can take me all the way”. While the track succeeds in what it set out to do (to garner mass appeal), the presence of the other band members were overshadowed by electronic rhythms.

In fact, the same can be said for “Tickets” and “Doin’ Dirt”, both clearly intended for dance floor domination. The former bears a strong techno influence, featuring snippets that feel as if they’re going to contort into Benny Benassi’s worldwide club hit, “Satisfaction”.  “Tickets” grows on you, as you helplessly succumb to the effortlessly catchy “la la la” hook. 80s-disco-inspired tune “Doin’ Dirt” opens with a sexy howl from Levine… too bad it pretty much goes south after that. Its mediocre melody is married with cheesy lyrics like “You’re shining like a neon light” and “So turn it up baby, make it loud”. Let’s hope the potential dance-remix is able to spice things up.

Probably the weakest track on the album, you don’t need to be a “Fortune Teller” to foresee how this song plays out, with the verses melding into the chorus a tad too predictably. The chorus itself is a letdown, seeming like a half-hearted effort to reel in the Top-40 crowd. The sexy frontman croons about being the victim in the relationship. Yet again. At this point, more than halfway through the album, we feel the topic’s been totally exhausted.

On the other side of the spectrum are stand-out tracks like “Lady Killer” and “Sad”. Despite differing vastly in terms of musical approach, both songs hold their own on Overexposed, without the assistance of auto tune and manufactured music. As its name suggests, sexy, funk-laden “Lady Killer” is about a femme fatale, and offers a flashback to the 5’s earlier work. It sticks out like a sore thumb on the record but in the best way possible, as it has the ‘X factor’ – something that the other songs lack. Levine’s killer falsetto is expertly showcased on the chorus, while the unexpected guitar solo – probably UrbanWire’s favourite moment in Overexposed – comes as a pleasant surprise to the listener. At 2:46s, it’s the shortest song on the album, which truly is a shame.

Overexposed dials it down even further with piano ballad “Sad”. The simple arrangement of piano backing Levine’s impressive pipes won UrbanWire’s heart for its honest delivery and plain sincerity in the lyrics. The bachelor divulged in an interview with MTV News that it’s his most personal track on the album, but remained tight-lipped about his connection to it. While he may not be forthcoming in dishing out the dirty details, the lyrics help to paint a clearer picture: “I’m kicking the curb cause you never heard the words that you needed so bad”. Perhaps, this is in reference to the notorious ladies man’s highly-publicised former relationship with Victoria Secret’s model, Anne Vyalitsyna (Anne V).  Perez Hilton claims that the sultry model ended their 2-year relationship because of Levine’s reluctance to get married. 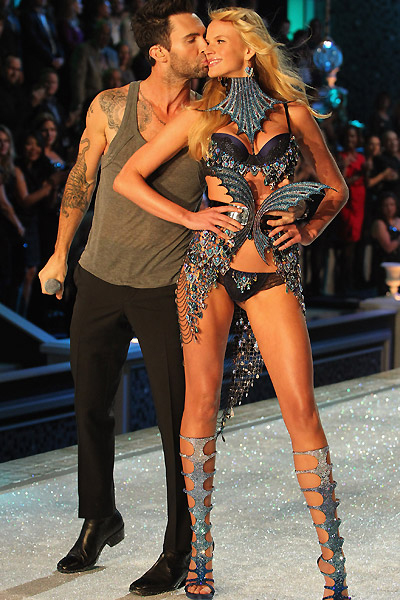 Wrapping up with “Beautiful Goodbye”, a bittersweet closing statement to the album. The acoustic guitar riffs in the background are in a similar vein of pop band Train, providing a laid-back, easygoing atmosphere.

Ultimately, as ironic as it may sound, M5’s “overexposure” leaves us confused about their re-born identity, and we’re no longer able to put a finger on what sets them apart from other artistes. The musicianship of the band is not well exploited on this record, for the most part, feeling like the Adam Levine Show as opposed to a band effort. If it wasn’t so evident before with their previous releases (think “Misery” and “If I Never See Your Face Again”), drifting further and further away from their R&B-influenced rock roots, it’s now clear as day that M5 has completely sold out, having tailored their sound to fit the mould of the generic pop music of today. If the shining moments of the album “Lady Killer” and “Sad” prove anything, it’s that these guys do best without the emphasis of style over substance, but so long as it keeps them on the charts, it is doubtful they’d be bothered by it.