UrbanWire has 6 sets of 30 Seconds To Mars premiums to give away! 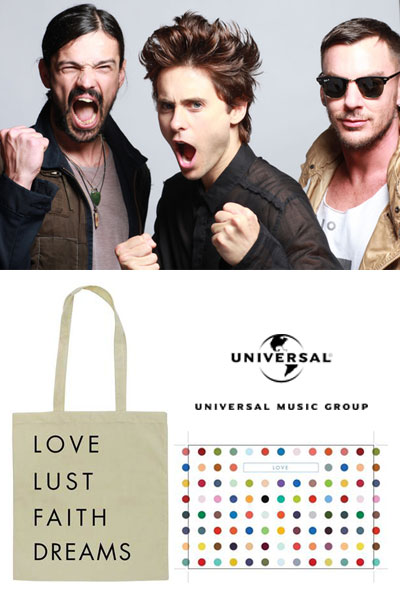 LOVE LUST FAITH + DREAMS, the new album from Thirty Seconds To Mars was released on May 21 by Virgin Records. Written and recorded around the world from Europe, to India, to the band’s studio in California, LOVE LUST FAITH + DREAMS was produced by Jared Leto with previous collaborator Steve Lillywhite (U2, The Rolling Stones, Peter Gabriel) co-producing four of the twelve tracks. Jared says that “this is more than an evolution, it’s a brand new beginning. Creatively, we’ve gone to an entirely new place, which is exciting, unexpected, and incredibly inspiring.”

LOVE LUST FAITH + DREAMS is the band’s fourth studio record. It follows This Is War, which was hailed as “an artistic triumph” by Alternative Press, “a shimmering epic” by MTV.com, and contained the No. 1 Modern Rock radio hits “This Is War” and “Kings and Queens.” During its two-year tour in support of This Is War, the band sold out arenas around the globe, playing over 311 shows in nearly 60 countries on six continents to three million people – and breaking the Guinness World Record® for the longest ever concert tour by a rock band.

In partnership with NASA, Thirty Seconds To Mars launched their first single from the new album into space. Literally. The first copy of “Up In The Air” was recently carried aboard the SpaceX cargo mission to the space station 230 miles above Earth. The single debuted at #6 on the Billboard 200 Chart.

Thirty Seconds To Mars have been nominated for three 2013 VMA Awards for the short film for their single “Up In The Air,” making them the most nominated rock band this year.  The video directed by long-time collaborator Bartholomew Cubbins will compete for Best Rock Video, Best Art Direction and Best Cinematography at the 2013 MTV Video Music Awards, airing live on MTV on August 25th.

Here’s how you can stand a chance to win:

2. Answer this simple question: What is 30 Seconds to Mars’ band motto in Latin?

Hint: The answer can be found at the start of the MV for “Up In The Air”.