A 36-year-old doctoral candidate plays a naïve and lazy boy, another man acts as his mother, people sell cows in Singapore, and the quickest way to get up to the clouds is to climb a bean sprout. 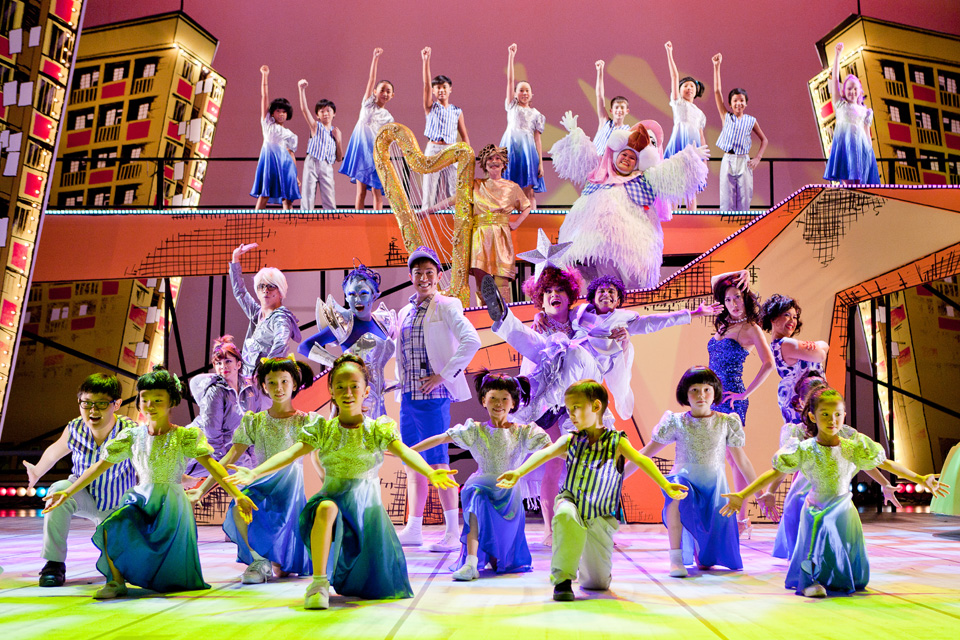 A 36-year-old doctoral candidate plays a naïve and lazy boy, another man acts as his mother, people sell cows in Singapore, and the quickest way to get up to the clouds is to climb a bean sprout.

If you’re muttering, “What in the world?!” or some less sanitized version, you’ll be in the minority among the audience catching W!LD RICE’s year-end and 10th pantomime, Jack & the Bean-Sprout.

Those in the house were too busy laughing to ponder the illogicalities of this year’s Cultural Medallion winner director Ivan Heng’s take of the familiar fairy tale Jack & the Beanstalk. In his signature style, the production was a humorous local twist on the bedtime story, with bits of cross-dressing, big sing-able numbers and a few jabs at the government thrown in for good measure.

Darius Tan (who’s been cross-dressing for other W!LD RICE productions like Cinderel-LAH! and Aladdin) plays Widow Neo, the widowed mum to Jack (Caleb Goh). The mommy’s boy struggles to repay her taxes owed to the Inland Revenue Authority (IRA) and debts to loan shark due to her gambling addiction.

When he’s forced to sell his Ah Kow [dog in Hokkien], which his mother claims is a dog, (but his “kow is a cow”) for cash, he returns with magical green beans that grow into a tall tau-geh [bean sprout in Hokkien] up to a giant’s lair above the clouds. In his desperation to pay off his debts, Jack climbs up only to plunge himself deeper in danger. 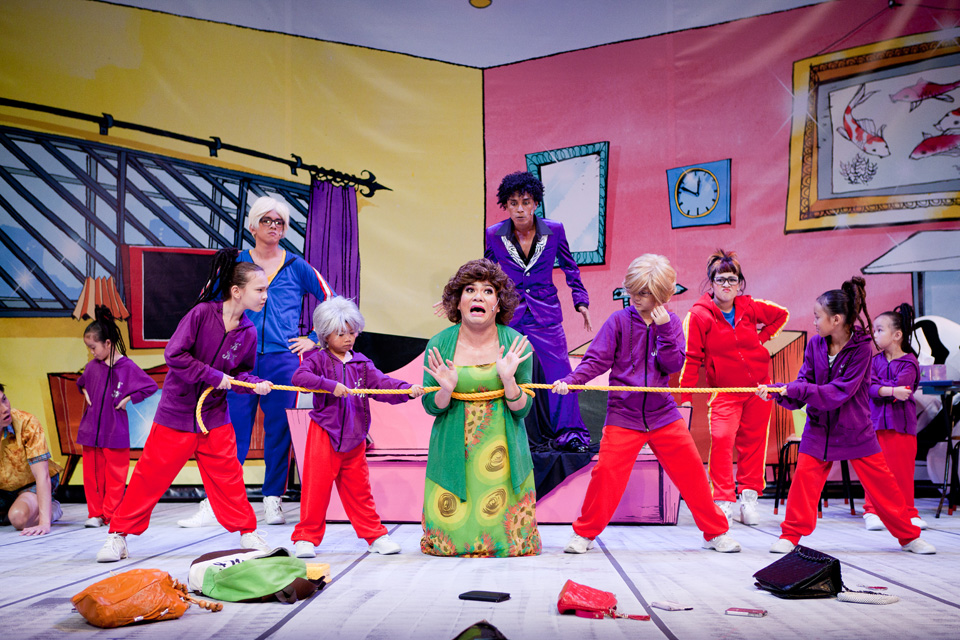 In his debut pantomime with W!LD Rice, Caleb’s portrayal as a small boy was definitely believable with his clean cut on-stage boyish persona, maybe a little more matured than his appearance in The Teenage Textbook. On the other hand, much applause should be given to Darius for flawlessly performing the role of Widow Neo who never betrayed his male identity for even a second behind those lavish female gowns! Well, that leaves a little less explaining for parents to do…

The show also sees veteran stage artistes like Karen Tan and Siti Khalijah who were in fact, the best source of comedy throughout the show. Tan was effortless in the execution of her character, Golden Hits Harp (the giant’s iPod), especially when injecting bits of humor through mainstream hits. My harp, my harp, my harp, my harp — do the lyrics ring any bells? 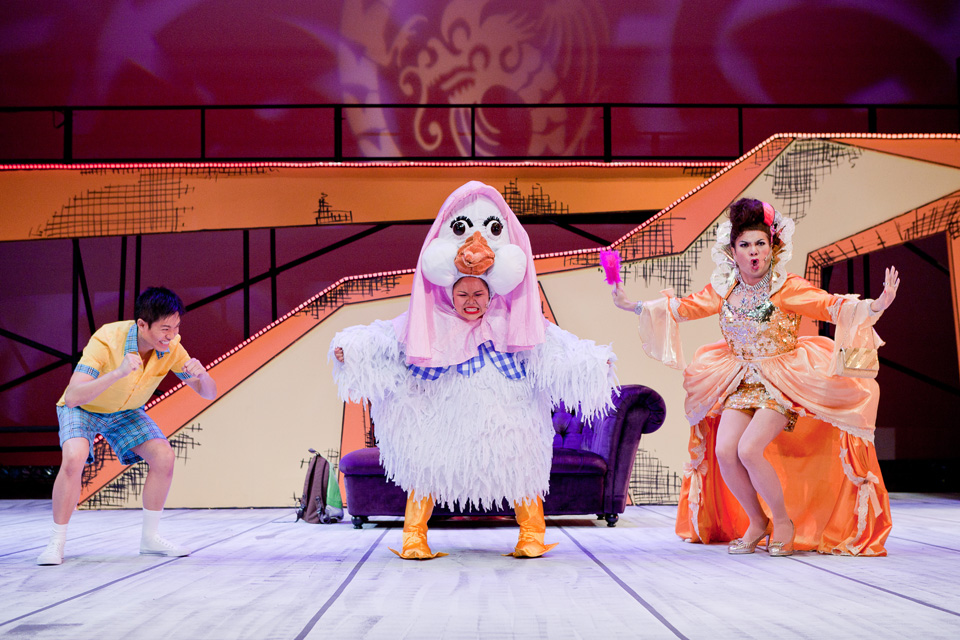 Siti endeared herself when she called herself a Goose Mangat [a wordplay on a commonly used phrase to describe shock] with a tudong [Muslim headscarf]. That, coupled with her faultless makcik [old Muslim lady] accent, made her character a joy to watch.

On top of the references to local landmarks like Marina Bay Sands and the heartlands of Hougang, the use of Hokkien and Malay phrases like “bo heng gai” [“not so smart”] and “goreng the tau-geh” [“fry the beansprout”] was a bonus to the show, especially if you’re Singaporean and can understand.

Originally staged in 2006, this year’s offering retains the comical and magical aura of its first production but sees a “brand new imagining of characters” as director Ivan Heng puts it.

Playwright Joel Tan, who made his debut with W!LD RICE in Family Outing, injected plenty of his innate humor in re-writing the script, as was evident with his sensitive jokes like Malays having bigger chances of winning at Singapore Idol, selling Ah Kow in Little India for Wagyu beef (many Indians practice Hinduism, where cows are sacred), in addition to political jibes at the “gahmen” [“government”]not upgrading lifts in Hougang, Hougang’s by-elections and people in “white uniforms”.

The set, designed by no less than the supervising art director of Oscar-winner Atonementand production designer of local film Blue Mansion, Ian Bailie, perfectly matched each scene of the show, showing us HDB flats, units in Hougang, the interiors of MRT trains and the casino. The charming FIRST STAGE! Kids performers were decked in costumes representing dice, cards and gambling chips. The set and contributing props made the experience real and engaging.

The music, composed by Elaine W Chan, who also composed for previous W!LD RICE pantomimes like Hansel & Gretel, Cinderel-LAH! And Snow White, saw the audience singing snatches of “Why So Jia Lat”[“Why So Unfortunate”] and “I Liddat Liddat You”, even after the show.

Perhaps to prevent the play from getting too boring for the younger, more restless, members, actors constantly posed questions to the floor to make the experience an entirely interactive one. You’d be surprised how enthusiastically those were received.

Even some minor problems on stage such as the fallen sofa, broken doorknob and a slipping wig on Siew Dai (played by Jo Tan) were cleverly covered up by the spontaneous improvisation of the actors, which demonstrated their professionalism.

Needless to say, with the show being a package of cheeky local humor, catchy choruses and dazzling costumes, Jack & the Bean-Sprout is one amazing Christmas present you can share with your family.

On Dec 3, W!LD RICE will be participating in the launch of a nationwide personal philanthropy movement, #GivingTuesdaySG, that encourages charitable donations in the course of the holiday season. Practiced for the panto, the movement is inspired by the success of its American counterpart that was first launched by New York’s 92nd Street Y in 2012. Donations from the public will be accepted to enable underprivileged Singaporeans to enjoy the panto during this Christmas season. A S$250 donation will cover ticket costs for a family of four and is entitled to a 250% tax exemption. 8 shows have been set aside for this charitable course.

In its efforts to raise funds for the Emma Young Fund, W!LD RICE will also be channeling $5 to the fund for each CD of the panto sold.

Jack & the Bean Sprout will be playing till Dec 14 at the Drama Centre Theatre in the National Library Building. Book your tickets here!