Enjoy the spirit of Christmas with Crazy Christmas featuring Dim Sum Dollies as they present a perfect blend of singing and dancing topped with a dose of comedy to fill the festivity with joy.

Christmas is around the corner and every reveler needs a perfect blend of singing and dancing, topped with a dose of comedy and laughter to fill the festivity with joy. Dream Academy’s fifth production of Crazy Christmasfeaturing the Dim Sum Dollies is that perfect recipe for good ol’ merry-making.

Chief Dolly Selena Tan is back on stage helming this year’s Crazy Christmas Ting Tong Belles! after a hiatus due to her national service commitment (read: directing the National Day parade). Alongside Selena is the usual favorite Pam Oei and new addition Denise Tan who takes over the late dolly Emma Yong.

An actress, radio deejay and professional stage actress herself (Hansel and Gretel, Beauty World, Animal Farm), Tan has credentials under her hefty belt. Despite her initial reservations of becoming a Dolly and replacing her good friend Yong, Tan nailed it onstage with her jolly dolly performance that highlighted her strong vocal and acting talents. Yong would’ve been very proud of her dear friend.

As a trio, they weren’t just Dollies but Ting Tong Belles as well. With the brightly golden bell outfits, and the shimmering and sexy cleavage-enhancing dresses, the 3 actresses brought the house down and had the audience breaking into peals and cackles of laughter throughout the show. Their portrayal as the new timeless Korean band, Girls Re-generation (a play on Girls Generation, a Korean Girl Band) as well as the contestants of Singapore’s first ever XXX factor — Beyonce Hou Say (Beyoncé), Se Ki Na (Rihanna) and Lady Mama (Lady Gaga) — truly depicted how well-versed these talents were in spoofing, and parodying personalities and just about anyone around them.

In addition, sassy Ting Tong Belles such as Judee Tan, Petrina Kow, Glory Ngim, Mina Kaye and Seong Hui Xuan rounded up the ensemble and made some memorable scenes.

On top of their synchronized dance routines and melodious voices, the cast’s efforts in weaving in English, Korean and Hokkien favorites resonated with the audience much more. Can you imagine asking, “what the fox says” (a play on Ylvis’ hit, “What Does The Fox Say”)? 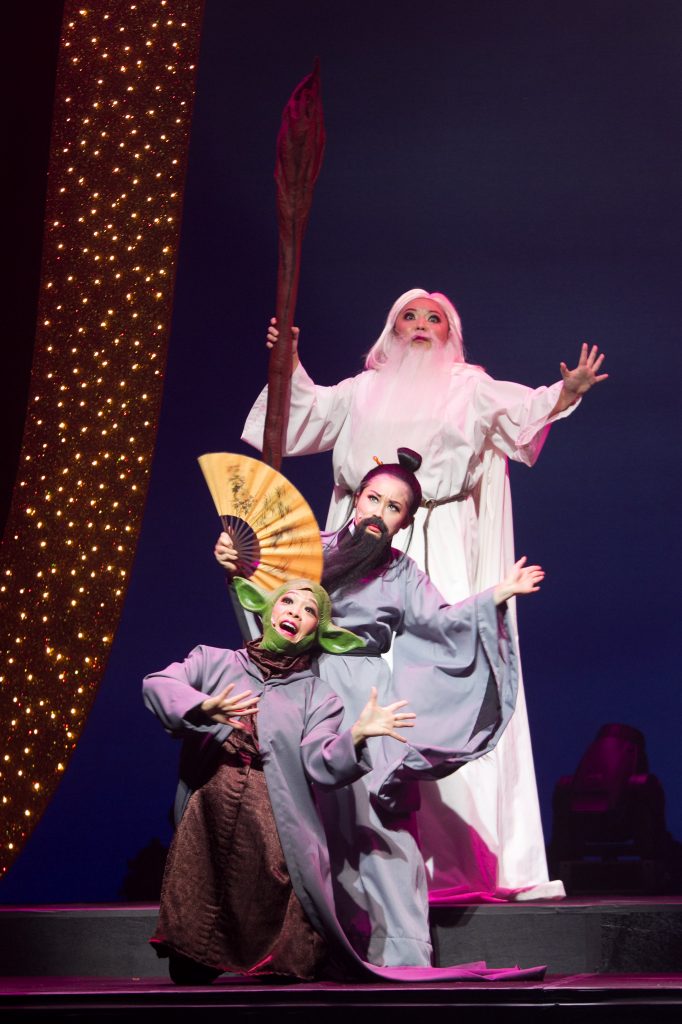 More festive jokes ensued as the Christmas version of the “Knock-Knock” game (aptly titled “Ting Tong”) created laughs in the audience although they didn’t make any sense.

Singapore’s acappella group, Vocaluptuous, with 3 critically acclaimed albums, All Wrapped Up, Notes from an Island and ‘Tis the Season, alsoput up a beautiful performance on stage while entertaining the crowd with their warm musical arrangement of rhythms and sounds in an absolutely refreshing style, complete with an enthralling beat-boxing segment.

Stand-up comedians Sebastian Tan and Kumar provided some cameo and comic relief as well. Tan, who played The Broadway Bengsince 2006 presented himself as Frosty The Snowman, icing his chilled performance with Hokkien phrases and ending with a heartfelt but comical version of a Hokkien number, “Ai Dao Cai Zhi Dao [You’ll Know When You’ve Loved]”.

Kumar, Singapore’s iconic drag queen, who staged his recent show Kumar: What Makes A Man A Man by Dream Academy, came in as “Singapore’s spiciest elf”. Loved by many for his ability to tease and tantalize his audience on any topic, Kumar’s political jabs were not to be missed. Tapping on the parliament’s Kueh Lapis (layered cake) poverty structure, Anonymous hacking adventures and Ashley Madison’s advancements towards Singapore, we wish Kumar’s performance should have gone on a little longer indeed.

With the feet-tapping music, flawless singing, enthusiastic dancing, complete with a generous topping of laughter and joy, Crazy Christmas: Ting Tong Belles was just like a scene of a kid opening endless presents on Christmas