Anime fans indulged in song after song during the 3-night music extravaganza.

Singapore’s annual flagship anime convention held at Suntec, Anime Festival Asia (AFA) is never complete without its daily post-festival highlight, the I Love Anisong concert. Featuring a strong lineup of 13 different artistes for 3 consecutive nights (December 5 to 7), the Anisong concert (portmanteau of ‘anime’ and ‘song’) continues to impress anime music fans all around the region, 7 years since its inception. 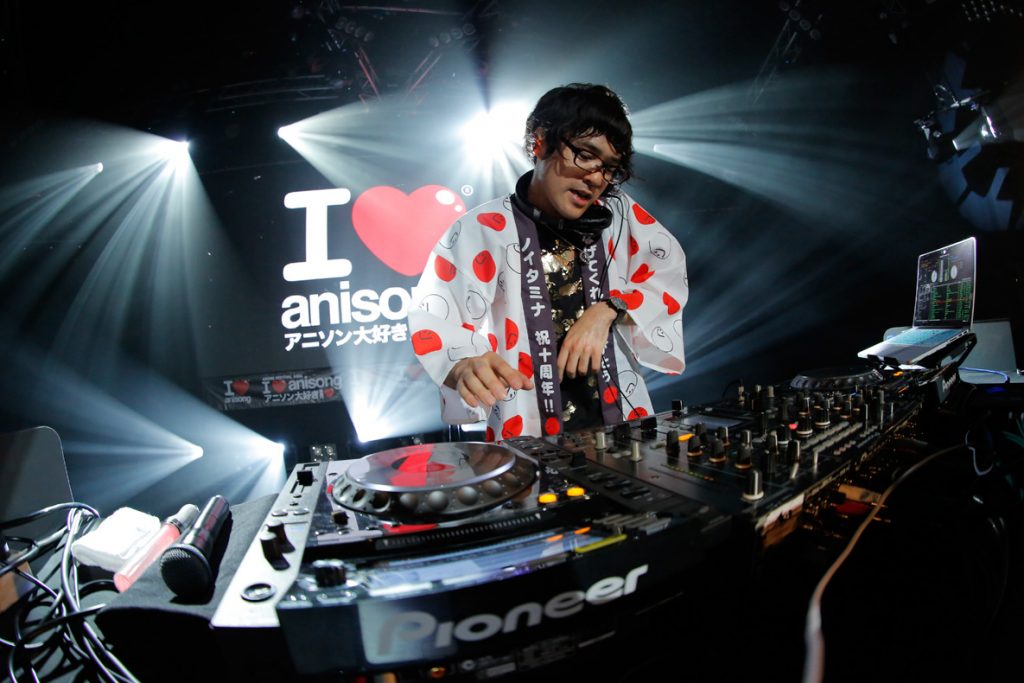 The 3-night extravaganza kicked off to a strong start with DJ Kazu dropping beats to anime’s hottest hits in the past years. Special mention must be given to to “Mogyutto LOVE de Sekkin Chuu” from the coveted Love Live! franchise for receiving the loudest and most coordinated otagei (the designated chants and gestures for specific songs). The reprise of T.M. Revolution x Mizuki Nana’s “Preserved Roses” evoked nostalgia from fans at last year’s concert.

Top tier seiyuu (Japanese voice actors) Yui Horie made her grand entrance dressed as a cutesy schoolgirl, working her charm to the coordinated and loud chants of support. Weaving an amusing entirely ‘Engrish’ skit featuring a pink, lovelorn bear into her set of songs, Hocchan wrapped up her performance with the surprise appearance of Miss Monochrome, Yui Horie’s original character, whom was popular enough to get her own anime series back in 2013.

King blades (a must have for diehard anisong fans) switched colors from pink to red when Horie’s Starchild labelmate and fellow seiyuu, Kitamura Eri took the stage to rock out with her band. The overwhelming bass in the sound setup and blinding lights plagued some of the performances. Technical difficulties aside, KitaEri captivated the crowd with her blazing charisma, singing “Rinrei”, the ending theme to mecha anime, Cross Ange. 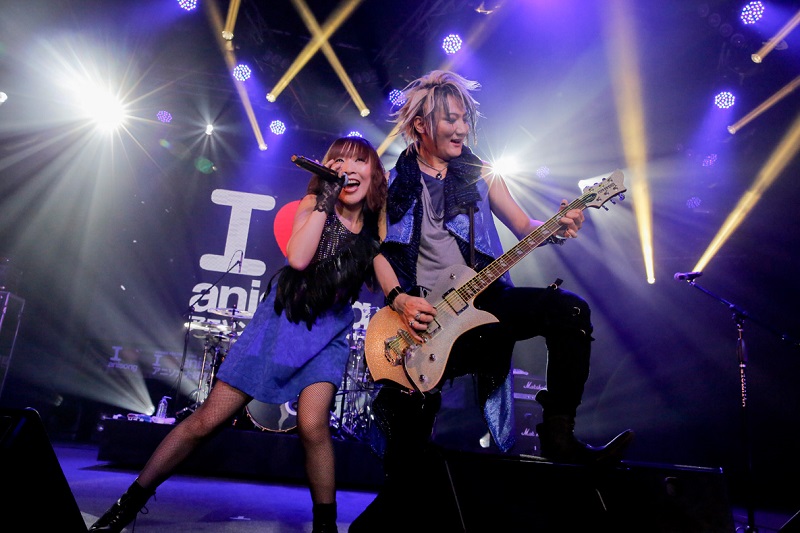 I Love Anisong 2013 concertgoers would remember AFA veteran duo angela’s “Boku Janai” (literally “It’s not me”) jokes from last year. The song saw its reprisal this year. Greeting the fans like old friends, songtress atsuko broke the news that KATSU has been desperately looking for a wife. Also known as ‘aniki’ (big brother’) with his signature visual-kei white hair, it was no wonder that even the male fans raised their hands and screamed when he asked for people’s hands in marriage. 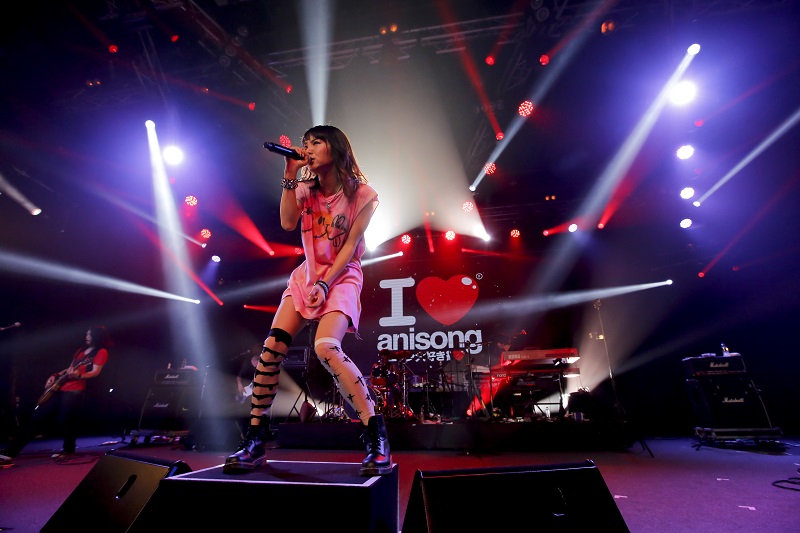 Rising star of anisong, LiSA, began the 2nd night’s concert with Angel Beats!’s “Crow Song”. Following Yui Horie’s attempt to bridge the language barrier from the night before, LiSA presented the fans with a special English version to “Crossing Field”, the very first opening theme of the hit, Sword Art Online (SAO) franchise. She went on to sing “Shirushi”, her first ballad and the 3rd ending theme for SAO’s second season.

Saturday’s audience pool was full of male THE iDOLM@STER (iM@S) fans, decked out in shirts and merchandise of the 9-year-old franchise. For what was touted as possibly the biggest highlight of I Love Anisong 2014, the girls performed only 5 songs, amongst which were character image songs “Precious Grain” and “Nemuri Hime”, with their respective seiyuu (Azusa Tadokoro and Asami Imai) taking charge. 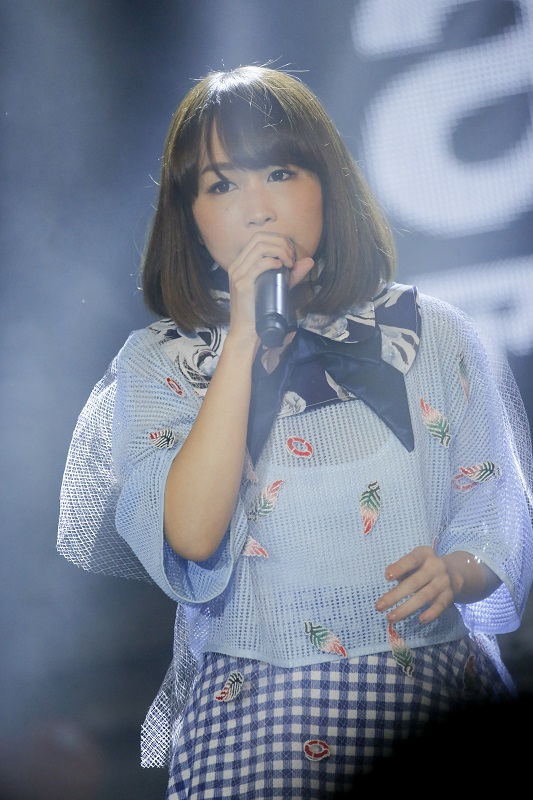 Anisong’s equivalent of a successful YouTube star, yanaginagi, turned the night on its head. Starting out as an utaite (someone who covers songs on Nico Nico Douga), the first voice of supercell and now a singer-songwriter in her own right, the vocalist crooned mellow dream-like tunes like “Aqua Terrarium” and “Mitsuba no Musubime” that complemented her refreshing voice, a change from the upbeat, hot-blooded anime theme songs. 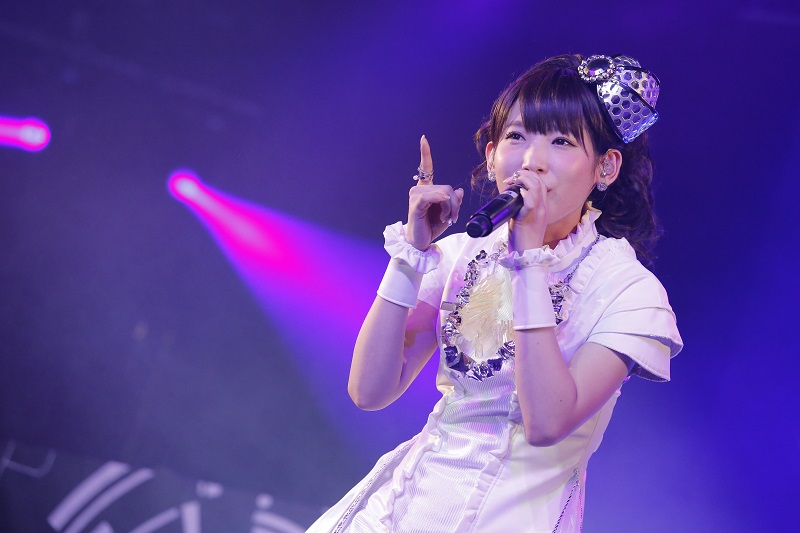 Day 2’s duo, fripSide performed without a hitch after falling victim to the sound system last year. fripSide vocalist Yoshino Nanjo had attracted many new fans after her successful stint as school idol Ayase Eli from Love Live!, which was ironic considering the enmity between certain iM@S and Love Live fans due to the similar genres and settings of both series. Fandom rivalry was not a concern, with fripSide dropping all-time fan favorites from “only my railgun” to the chart topping “sister’s noise”, opening themes to the acclaimed A Certain Scientific Railgun series.

Sunday (Dec 7): Bring the Boys (and Dancers) Out 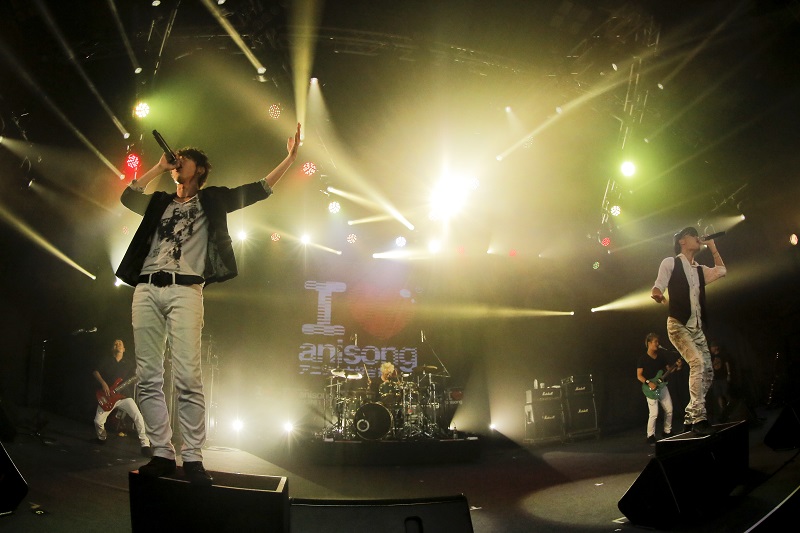 With the past 2 nights riddled with the ladies of anisong, boy band Flow headed the final day’s lineup, extremely pleased with the fact that they were now the opening act. They also joked about taking their own sweet time with their performance, after being unable to complete their planned setlist due to time constraints last year. As if the group’s energy combined with the classic “CHA-LA HEAD-CHA-LA” of Dragonball fame did not hype the crowd enough, Nico Nico Douga (NND) dance cover group PCF made a surprise appearance during “Go!!!”, wow-ing the audience with their crazy dance moves worthy of the ninja anime the song belongs to. 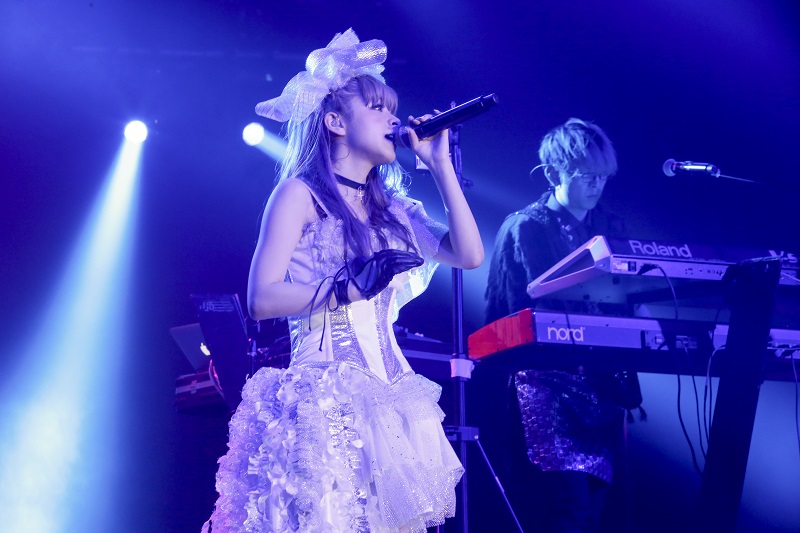 Up next was GARNiDELiA, the 3rd duo in the I Love Anisong lineup. The group has received much attention ever since “Ambiguous” from Kill La Kill was released, certifying their position as one of the most lauded anisong acts in recent years. Yet another NND dancer, the lovely Miume, made a cameo during “Lamb” showing off her impressive dance abilities. 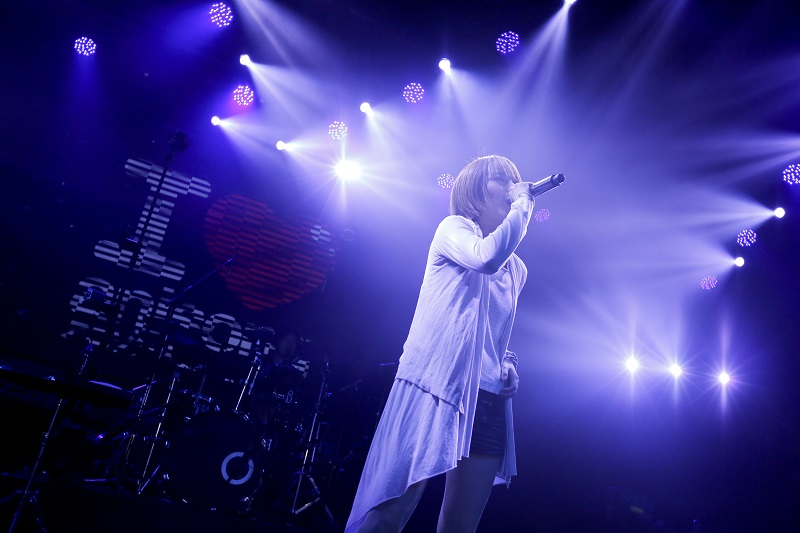 Having provided the theme songs to the same series (Fate/Zero, SAO) as LiSA, Aoi Eir brings out the enthused SAO fans within the audience with “Innocence” and “Ignite”. Regrettably, both Aoi Eir and LiSA failed to perform their Fate/Zero hits (“Memoria” and “Oath Sign”) that their pre-SAO fans would certainly have appreciated. 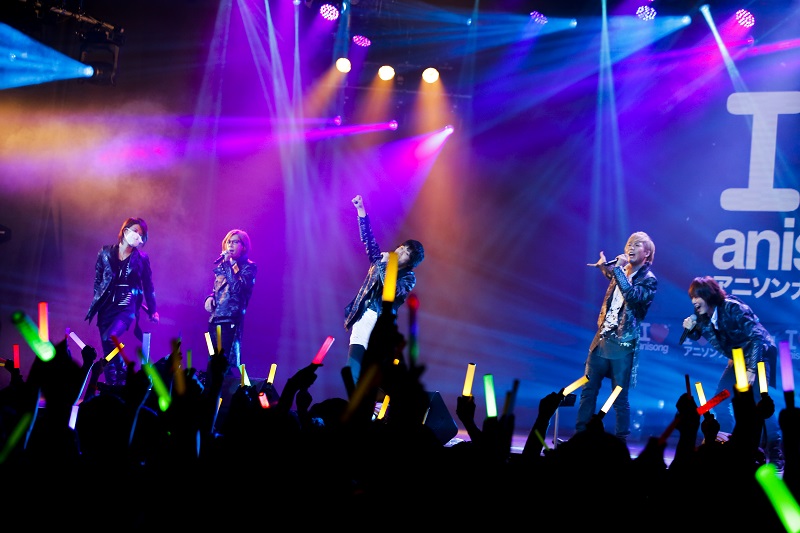 NND boy group sensation, Root Five elicited some of the loudest fangirl shrieks on all 3 nights. This was despite being one member short, with Mi-chan rendered unable to speak because of his recent throat surgery. Undeterred, the charming quintet performed a 4-song set and closed with “Senbonzakura”. 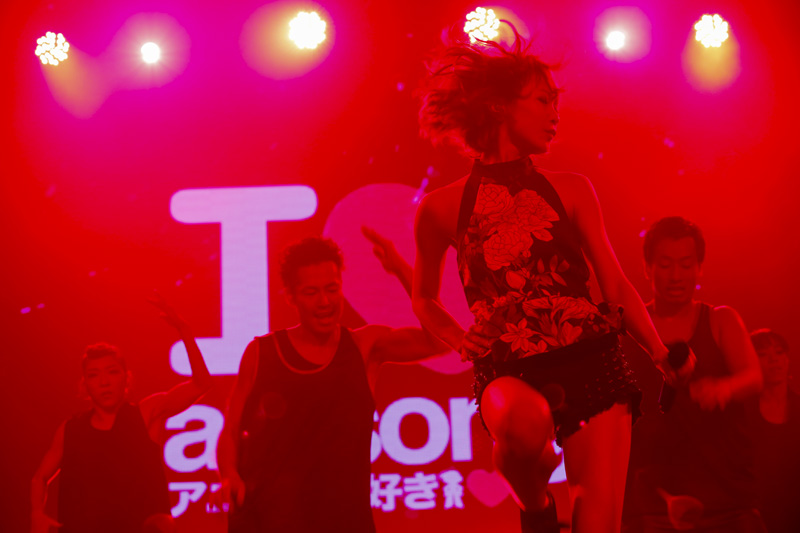 What better way to end the anisong concert than with May’n, who’s been a permanent guest of I Love Anisong since its inception 7 years ago. Having dropped by for annual visits (most recent being her live concert in May) May’n commented that Singapore was practically her second hometown.

Completely immersed in Singaporean culture, the singer of complained about the lack of prata back in Japan. Not letting her prata hunger get in the way of a good show, the singer performed her signature “Lion” amongst tracks such as “Brain Diver” and “Chase the World”, bringing 2014’s AFA to a splendid end.