“You should buy that soft cake…what is it called?” asked internationally-acclaimed actress Zhang Ziyi during the press conference of epic drama film The Crossing, together with director John Woo, Tong Dawei, and Woo’s daughter Angeles Woo. Zhang was recommending local food to co-star Tong, but she couldn’t recall the name.

Turns out the ‘soft cake’ is a pandan cake [a light, fluffy cake made with juice of pandanus amaryllifolius leaves]. The Chinese actress lit up at the mention and, like a good tour guide, she added, “You can buy it at the airport!”

This unscripted moment endeared her a little more to the reporters, and her enthusiasm for our local food was just the icing on the cake (pun intended) in a very candid press conference. 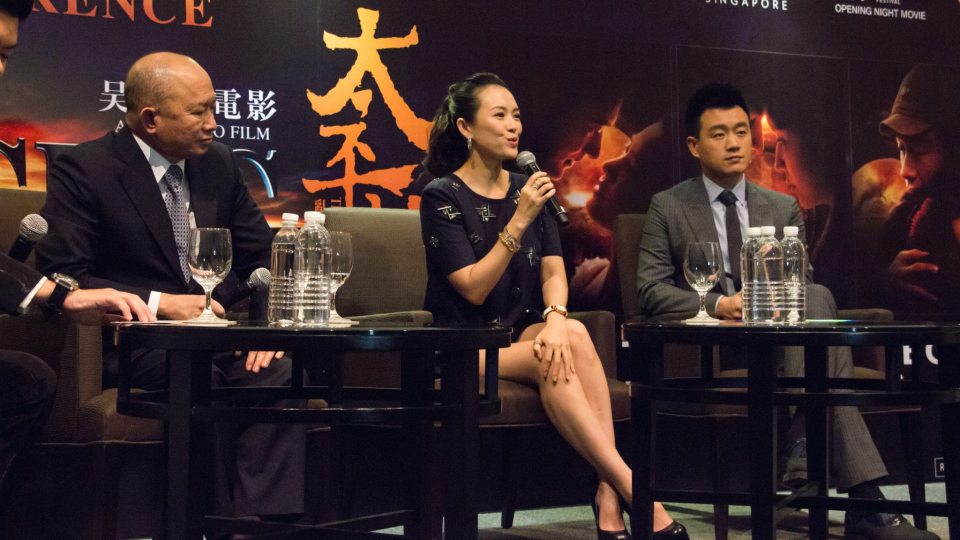 Ankles crossed and shoulders relaxed, Zhang seemed right at home at the ArtScience Museum gallery. Rightfully so, as she has attended many press conferences in this gallery back when she was the ambassador of ScreenSingapore 2011. “Being back in this room gives me a very warm feeling, and it’s good to be back here for the second time,” said Zhang. She even greeted a reporter warmly, “We meet again; you look very familiar.”

Based on the true story of the sinking of the Taiping steamer, The Crossing zeroes in on the love stories of 3 couples, who flee China for Taiwan on the steamer during the 1949 Chinese revolution. Zhang plays the other half of a Chinese soldier (played by Tong Dawei) as a nurse-turned-prostitute named Yu Zhen, who suffers much hardship in her journey to find happiness with her beloved.

Having never experienced something like this in her life, Zhang was drawn to the script and moved by the complexities of the characters. The fact that Woo was at the helm of the film was a drawing factor. “No one would pass up a chance to work with the esteemed director Woo, especially as someone who’s part of the younger generation,” she said.

Living up to her reputation as one of the Four Dan Actresses of China, Zhang was lauded with praise from Woo and Tong. “Despite having to film an emotionally charged scene for their (Tong and Zhang) first scene together, the chemistry and level of acting expertise they displayed was so exact that it moved me to tears,” said Woo.

Tong complimented his onscreen love interest plenty, attributing the success of the takes to Zhang, who helped him get into the role and atmosphere seamlessly.

Despite the compliments, the modest Zhang claimed she didn’t prepare for the role. Based on her stellar resume, which included working with Wong Kar-wai in 2046 and The Grandmaster, Zhang was in a very unique environment then, sans scripts. 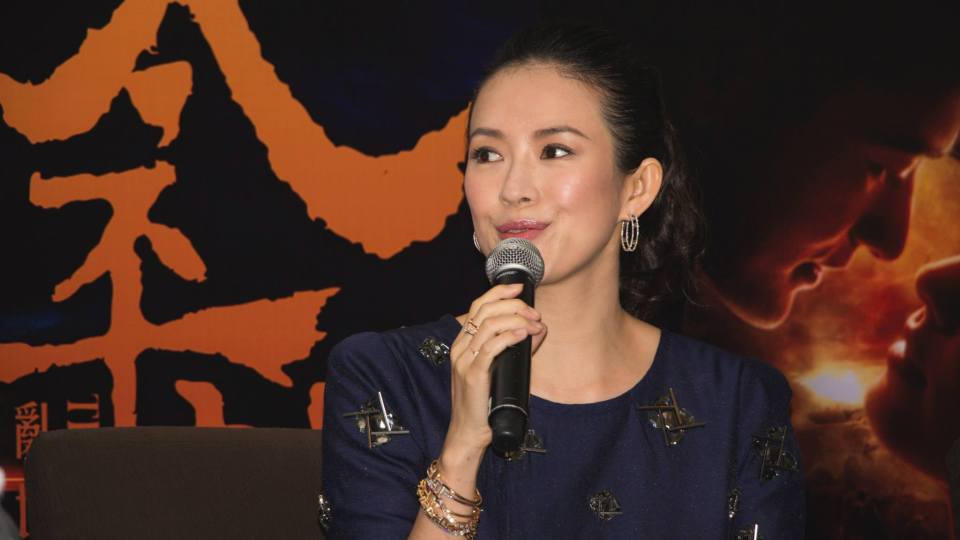 In a press conference for The Grandmaster, Zhang shared that her character was developed with the trust between her and Wong, and because there weren’t any scripts, she had to be herself and just do what felt right to her at that time. “Acting is not about studying and focusing on the technicalities, but it’s about getting into the moment, when you’re in costume and make up and being on set, and just letting the feelings you feel at that moment take you,” shared Zhang.

Since her debut role in the award winning The Road Home in 1999, Zhang has enjoyed a constant stream of success. Over the past 16 years, she has starred in and won awards for her roles in films such as Crouching Tiger, Hidden Dragon, Memoirs of a Geisha, and The Grandmaster, which has won the hearts of critics and moviegoers alike.

Due to the success of Crouching Tiger, she was typecast as an ‘ass-kicking’ actress (in her own words), and went on to star in more martial arts films (House of Flying Daggers, Hero). It was only after Memoirs that she was finally being seen as a serious and versatile actress.

The fruits of her labor didn’t come without grit and determination.

At the tender age of 11, Zhang left home for the Beijing Dancing Academy to endure a harsh and competitive gymnastics environment alone. Despite the hardships, she pushed through and gained acceptance into a secondary school affiliated with the prestigious Beijing Dance College.

Although she won many awards in her dance career, she became frustrated with the pressure that came with it. Zhang eventually decided to focus on acting and enrolled into Beijing’s renowned Central Academy of Drama, which sparked the beginning of her illustrious acting career.

However, even with attaining immense success with her films, Zhang still felt that she had to prove herself to the public.

After Crouching Tiger, critics and naysayers commented that it was a matter of luck being on her side. In an interview by TIME magazine in 2000, she responded to them: “My success hasn’t just been a question of good luck…I used my own abilities to seize it (the lucky moment). They’re not willing to admit that I’ve also shed blood and tears and often paid dearly for my success.”

She went on to add, “My only course of action is to work as hard as I can, not just for the sake of the film, but also to prove to these people that I do have talent…and to silence them with my actions and achievements.” 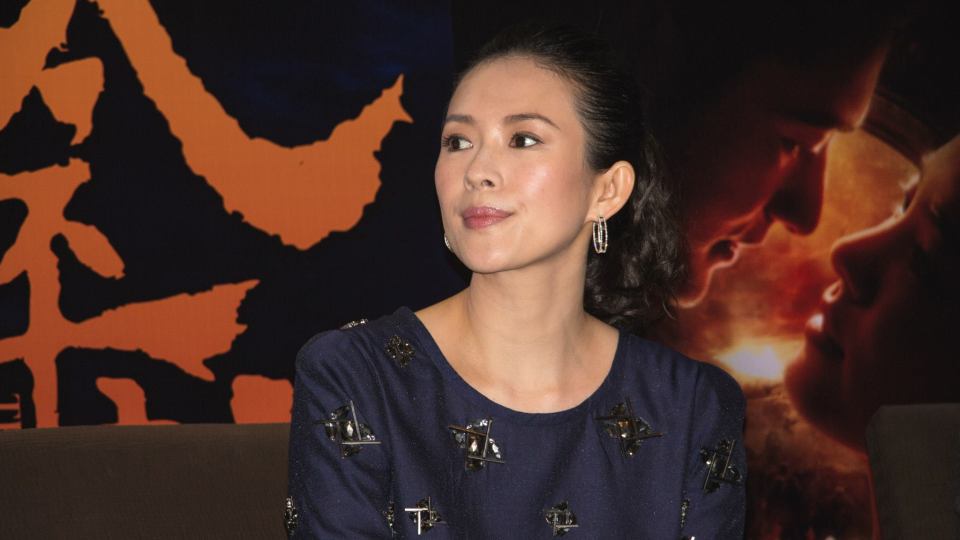 This tough and uncompromising spirit of Zhang still remains as a defining trait today, as she reiterated the same views from 14 years ago.

“In all the characters I’ve played so far, they hold the same stubborn quality that I really like,” shared Zhang. She paused for a moment, as if to gather her thoughts. “I feel that the stubbornness and perseverance found in my character are attributes that all successful people possess.”

The 35 year old actress went on to assert, “Maybe sometimes the stubbornness is misplaced, but no matter in successes or failures, one must never stop having a perseverant spirit.”

This belief has certainly served her well, especially during the production of The Crossing, which experienced many challenges. According to Tong, this film has been the toughest for him to film to date, with the entire process from the first meeting to the last filming session taking up more than a year. But nonetheless, Zhang held steadfast to her decisions.

“I’m just like my character in the movie, if I really want something and I believe that my choice is right, I’ll continue to persist despite the obstacles I may face,” she shared. “It doesn’t matter how it ends, because we have managed to grow as a person in the entire journey.”

The Crossing is an epic drama film released in 2 parts. The first part was released on Dec 5 and the second part will be released in May 2015.