The Kitchen Hoarder aka Sarah Benjamin gushes about all things food, and admits to her unexpected Food Hero win 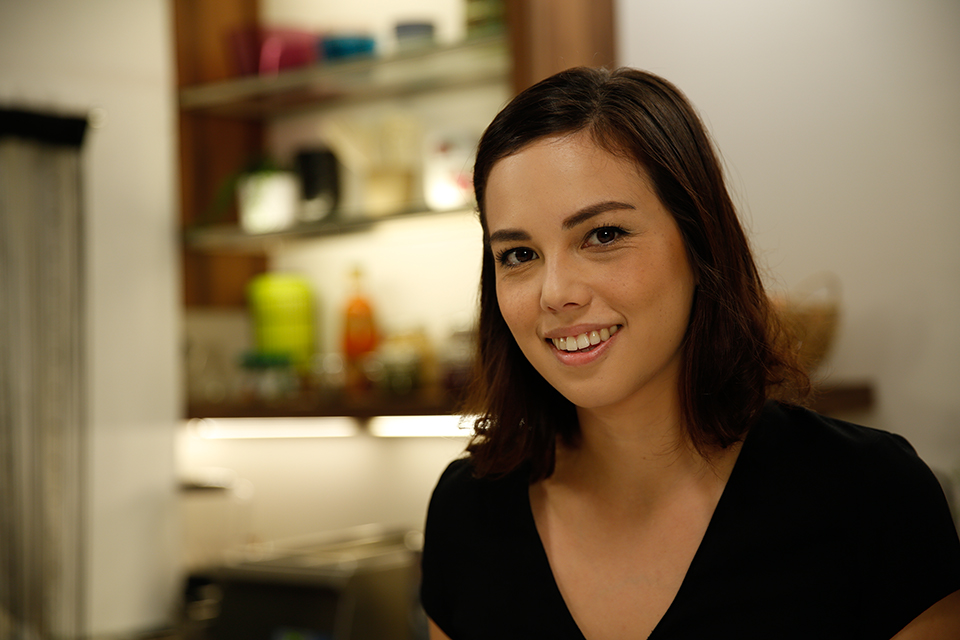 “I’d love to just go to Italy for 2 months and just Eat, Pray, Love myself. Then come home and eat salad for, like, a year.” Sarah Benjamin, Kitchen Hoarder and self-professed noodle lover, is waxing lyrical about her ‘foodie bucket list’. “I really want to go to Hokkaido and stuff my face with seafood. And I’d love to go to Korea, and just eat all the weird Korean food.”

“I really enjoy it, I like being busy, so I really like throwing myself into something, being so busy that you can’t even think about anything.” She smiles.

With Food Hero 2015’s hunt for talent already ongoing until June 28, Sarah brings us through the story of her audition video. She wanted to keep her video short, citing her own boredom with long YouTube videos. “I bought this hae bee hiam (spicy dried shrimp sambal) from Bali, so I made pasta with caramelized onions and hae bee hiam. Honestly, I really just came up with it on the spot, because when I made the video, I really didn’t think anything would happen,”

She adds with an embarrassed laugh, “If you watch the video, you’ll notice I didn’t even bother to tidy my kitchen, ‘cause I didn’t think anything would happen!” shaking her head in disbelief. “So now when I watch TV and they put it in the promo, I think, why didn’t I move that… thing?!”

Born in Singapore to a British father and Peranakan-Chinese mother, Sarah grew up helping with the cooking at home. She cites her grand-aunt as her culinary role model. “My grand-aunt was actually blind since a young age, like 5, and she taught herself to cook even though she cannot see; she taught herself using touch, smell and hearing. And she would chop things, it was crazy!”

To satisfy her cravings for home-cooked food while studying sociology and politics at the University of Edinburgh in Scotland, Kitchen Hoarder was born – a food blog she started in 2010 after she began teaching herself to cook Asian food. She describes her cooking style as fun, simple and comforting.

“Cooking is about having fun, and it’s not about making the best dish ever. You can always eat out if you want to eat, like, 3 Michelin star food, you know?”

When she produces posts for Kitchen Hoarder, Sarah says she usually tries to cook what she feels like eating or what she can give away. A surprising amount of organization goes into it – something she says a lot of people don’t realize. She runs Kitchen Hoarder single-handedly, with everything from food photography to styling – and a single post can take up to 1 and a half hours, from preparing the ingredients to cooking, then finally photographing the finished dish.

Sarah says the most popular post on Kitchen Hoarder is actually a decadent chocolate cake she baked for her own birthday a few years ago. “I think it was my 21st or my 22nd birthday, so I was like, I’m gonna make an exciting cake.” She laughs.

“Ganache is actually my favourite trick for making cakes. It’s really simple, and people actually think ganache is so impressive but it’s really easy. And it tastes so good!”

We all know she likes to cook for others, but does the food guru love to eat? Sarah breaks into a grin when asked about her ‘guilty pleasure’ food. “I really love doughnuts. I know it’s so bad for you, and it’s not even really interesting, it’s just a sweet fried food. I have a huge sweet tooth. It’s really bad. Some people don’t like very sweet desserts, but I can take sweet desserts. The sweeter, the better. You know the Indian Gulab Jamun? I love that. It’s so sweet but I love it.”

What about eating clean? Surely you can’t maintain a slim physique like that without some greens and grains? “I usually take some salad, some soba, and I make a miso ginger dressing and some smoked salmon,” she laughs. “I normally eat quite clean, even though I wax lyrical about doughnuts!”

According to Sarah, the most deceptively easy dishes to make are the ones that take the longest. “Anything that you can cook for a long time is good, because even if you’re late, it doesn’t really ruin the dish.”
“I think people get very impressed with stews, but they’re really easy – just throw everything into a pan and let it cook. I think people are very impressed by rich flavours, like beef. They go like, ‘Wah, so indulgent!’” She says with a wry smile.

“I’m not a chef, I’m just a home cook who just really likes to cook. I’m not someone who likes to order people around. I really want to encourage people to cook.”

What’s your favourite dish that you don’t know how to cook? Perhaps we can convince Sarah to do up a tutorial for you ;) Tell us in the comments below!

Food Hero 2015 is on the hunt for their new hosts! If you think you’ve got what it takes, simply upload an audition video on the Food Hero app. For more information, please visit www.foodhero.asia