Die-hard fans began queuing at 3am in anticipation for American pop-rock band The Maine’s second concert in Singapore, the last stop of their “American Candy” tour in Asia before returning to the US. While still maintaining their signature style of youth anthems, “American Candy” adopts a lighter and happier tone compared to their past works.

Hailing from Phoenix Arizona, The Maine shot to fame in 2008, a mere year after their formation, gaining a strong following with their infectious pop rock numbers. Since their sold-out Singapore concert 2 years ago at TAB, the busy quintet has released another acoustic EP, Imaginary Numbers, and their fifth studio album, American Candy (it debuted at no. 37 on the Billboard 200).

It was no surprise that the audience was filled with pop-punks clad in black apparel, awaiting the arrival of the band responsible for their too-emotional shower singing.

The dedicated following relived their pre-teen angst, getting antsy in anticipation for the concert to begin, and trust me, it was no easy feat getting through them.

Warming up the stage was local singer-songwriter Deon Toh and his band, engaging with crowd with their eclectic mix of alternative, folk, rock and pop, projecting earnest melodies reminiscent of Coldplay.

Our worry that their slow tempo songs wouldn’t get the crowd pumped was seriously misplaced because they picked up the pace, ending their set with the upbeat “Stars” as the audience cheered dutifully.

The Maine took the stage against an American-flag inspired backdrop and started with our personal favourite song from their latest album, “Miles Away”. This writer sure had a hard time paying attention as she belted out the lyrics along with the crowd.

“It’s extremely humbling, the fact that we’re able to play music for people so kind and in a f*****g city so clean. It’s been a little bit since we’ve been here but there’s twice the amount of people and that means the absolute world to us,” John O’Callaghan, The Maine’s frontman, told the crowd between songs, taking every opportunity to express their appreciation for their fans’ support. 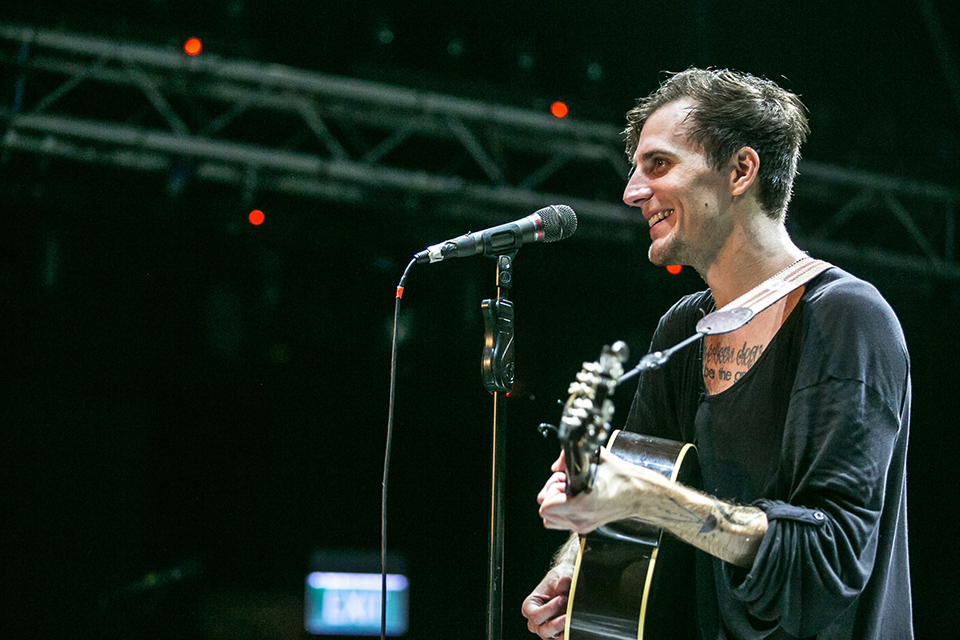 He got the crowd going with but a simple statement: “I don’t want to blow smoke into your asses, but I just want to say that if we keep going at this exponential rate right now, this will be my favourite show of this f*****g tour.”

As the rest of the band took a break off stage, John slowed it down with an acoustic version of crowd favourite “Into Your Arms” – a welcome breather from the dynamic anthems.

“If you know the words to this song, please help this lonely man out,” he said, and the audience erupted in cheers of approval as he plucked out the notes.

Right after, we were surprised with a cover of a Rolling Stones song. Looks of recognition passed through the crowd as they laid into “(I Can’t Get No) Satisfaction”.

Everyone went ballistic when John got down from stage and began dancing with the crowd, owning the rock classic before being crowd-surfed back onto stage. Their larger-than-life stage presence and engaging audience interaction left us wanting more. In fact, the band was in our office the day before for an up close and personal interview.

But amidst the throng of pushing and shoving to get closer to our rock-star, John spotted a distressed audience member. Trying to make her feel better, our gentlemen pulled the Right Girl from the crowd to perform “Love and Drugs” with them. She killed it, jumping and dancing with infectious energy, joy written clearly on her face.

The band played from their arsenal early of fan favourites and peppered in tracks from “American Candy” instead of just promoting their latest releases. It was a tasteful combination, reminding fans of their early work and why they fell in love with the band while giving everyone a taste of their new music.

Despite playing a secret show just the night before, the band remained at the top of their game, delivering a hell of a good time. Capping off the night with “American Candy”, they professed that they were “definitely coming back soon”, which was the perfect ending to some crazy head-banging and hair-flipping.

We also had The Maine in our studio for a round of quick-fire questions. Find out things you never knew you wanted to know about the band, like whether the members prefer John, or Pat.

Tell us what you think of the concert in the Comments section!