These e-Sports commentators share the joy and struggle of their work.

It’s midnight, and Sean ‘Hades’ Goh is all set to work for the next 7 hours.

The e-Sports shoutcaster is alone in his room, but he always has a global audience in the thousands.

Like a sports commentator, Sean provides running commentary for multi-player video game competitions. His job is to help the audience understand the mechanism of the games, appreciate the players’ strategies and keep them entertained and engaged.

“What gets you the furthest in this industry is how much you love the game,” said Sean, who has worked on tournaments such as the most recent Mars Dota 2 League Macau Qualifiers as well as the Galaxy Battles CIS Qualifiers.

The recent university graduate is a rare full-timer in his field. In Singapore, there are fewer than 10 recognized shoutcasters, and many are working on a freelance basis.

The shoutcasting profession came about in recent years thanks to the fast growing electronic sports (e-Sports) market, which is expected to generate some US$700m in revenue this year according to the 2017 Global e-Sports Market Report by Newzoo.

The booming market has made it possible for not just e-Sports players such as Daryl ‘iceiceice’ Koh and Wong ‘NutZ’ Jeng Yih to make a viable career out of their passion. Gaming enthusiasts who are blessed with a good voice are also able to find work opportunities in shoutcasting.

There are now 9.5 million e-Sports viewers in South East Asia (SEA) alone. The number is projected to grow to 40 million by 2019 according to the same Newzoo report. 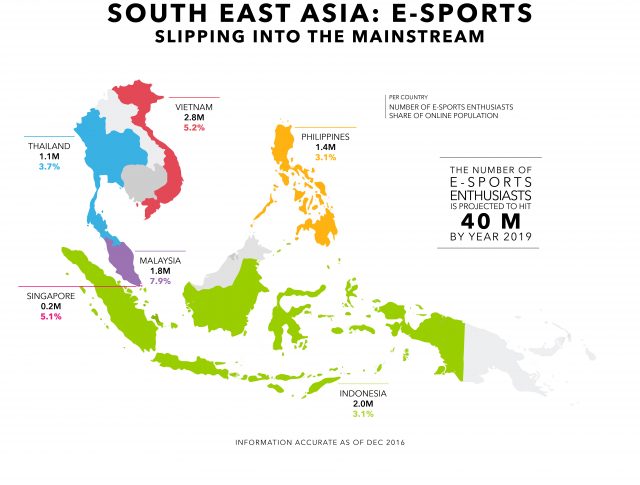 Shoutcasting may appear easy to some people, but professional shoutcasters like Sean said he could do a good job only if he’s understood the game thoroughly and prepared his delivery well.

“You have to keep pushing yourself to improve,” he added.

A shoutcaster also needs a shining, spontaneous personality to stand out.

“Some can work hard for long period of time, and never get recognized for their work,” said Chris “The Chris Man” Lim, an ex-caster for Garena.

Lyn-Feng also agreed. “It was a long grind,” he said. “It took me almost two years to gain recognition.”

But Lyn-Feng is not daunted by the need to work hard. He is also fine with losing sleep when casting American or European games overnight. Rather, he’s more concerned about his mother’s objection.

“She thought I was just trying to play games,” said Lyn-Feng, adding that his mother has been asking him to go to university and focus on his studies.

But he’s not ready to give in yet, especially as he’s still trying to make up for lost time after spending 2 years in National Service (NS).

“I was definitely frustrated,” said Lyn-Feng. “You lose job opportunities if you go missing for 2 years.”

While it might take some time before shoutcasting is broadly recognized as a “proper” profession here, shoutcasters like Sean and Lyn-Feng are not losing heart.

Sean, for instance, said he will continue working towards his dream. To cast an exciting Dota2 Major that is.