Mdm Yeo of Cheng Xing Provision Shop shares why she’s decided to put up the shutters.

Opened 70 years ago by Mdm Yeo’s father-in-law, Cheng Xing Provision Shop, has served a steady stream of customers at Geylang.

Business remained brisk for decades, but, after the implementation of The Liquor Control (Supply and Consumption) Act in 2015, its sales started falling, said Mdm Yeo in Cantonese.

The Liquor Control (Supply and Consumption) Act bans the sale of liquor from 10.30pm to after the Little India Riot in 2013, which saw 18 people injured and many properties including ambulance and police vehicles damaged.

Mdm Yeo’s business took a hit as her provision shop was a popular pit-stop for those who wanted a quick alcohol fix.

Besides the financial strain, Mdm Yeo also had to cope with her husband’s sudden death in 2016. Losing him got her thinking about pulling the plug on her struggling business.

“All three of my sons also don’t want to continue this business… Since I can no longer support [my shop], I have to sell it,” Mdm Yeo said while handling her last few customers.

Among those customers was Mdm Choy Ah Lai, a long-time friend of Mdm Yeo.

“I’ve been her friend for very long,” Mdm Choy said in Mandarin.

“I saw the drop in sales … I also think it is time to let go of it … so she can have an easier life.

“There is no point conserving it already,” Mdm Choy added.

Auntie Yeo with the remaining items on sale during the last days of Cheng Xing Provision Shop’s operation. Photo by Eugene Hu

Days before the shop’s closure on 11 May, Mdm Yeo played host to regular customers, friends as well as volunteers from digital video publisher Our Grandfather Story. 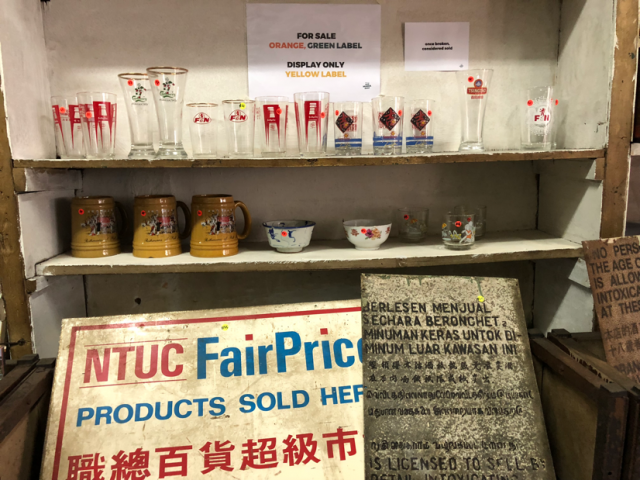 Ms Cheah Wen Qi, the co-founder of Our Grandfather Story, said that it was “sad to see this historical shop to be sold”. But she said she understood why Mdm Yeo had to do it.

Free maps of the Geylang stretch and information about Cheng Xing Provision Shop. They’re prepared by the volunteers from Our Grandfather Story. Photo by Nurul Iman

“We should continue conserving our history, but not necessarily by keeping these buildings,” said Ms Cheah, who was also giving tours around Cheng Xing Provision Shop. “We can also talk, write or even make documentaries about them.”

With a bittersweet smile, Mdm Yeo said she’s ready to bid farewell to her decades-old shop.

“I’ve held onto the shop for too long already… it’s time for me to let go of the past and move on.”