Joshua Lee, 24, has collected over 20 one-of-a-kind vintage pieces in recent years. Each piece costs him around $150, much pricier than many freshly launched off-the-rack collections, but he feels it’s all worth it.

It’s good “knowing that you own a shirt that came out when a certain movie came out, or when a certain album dropped,” Mr Lee told The UrbanWire. “It has history and that’s something that new reproductions wouldn’t have.” 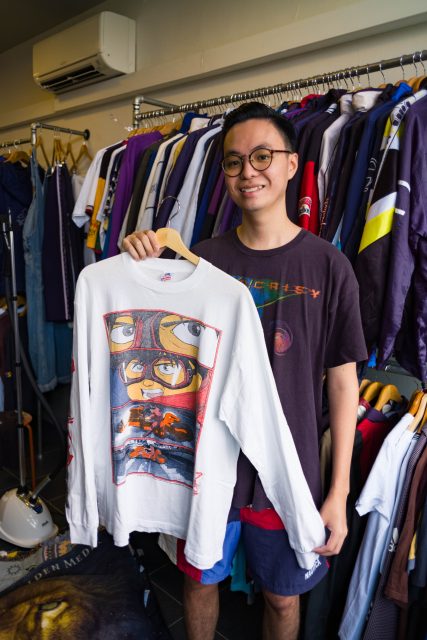 One of his prized possessions is a black T-shirt, released in 1992 as part of the official merchandise for Nirvana’s hit song “Come As You Are”. If you would like to buy it at his monthly pop-up store Deaththreads, be prepared to fork out hundreds.

Started in June 2017 and managed by a team of four vintage apparel enthusiasts including Mr Lee, Deaththreads is one of the earliest providers of vintage apparel here. It’s fast gained many followers, especially among young Singaporeans in their late teens and early 20s.

For the first 9 months, interested buyers who wanted to browse Deaththreads collections had to cram into the creative studio of Deon Phua, 26, one of the brand’s co-founders. He soon found the space too small for the growing crowd.

“My full-time job is at a creative studio, so for the first nine months, (our pop ups) were held at the studio,” said Mr Phua. “Only after the crowd was getting too big we decided we needed to shift out and find a new space.” 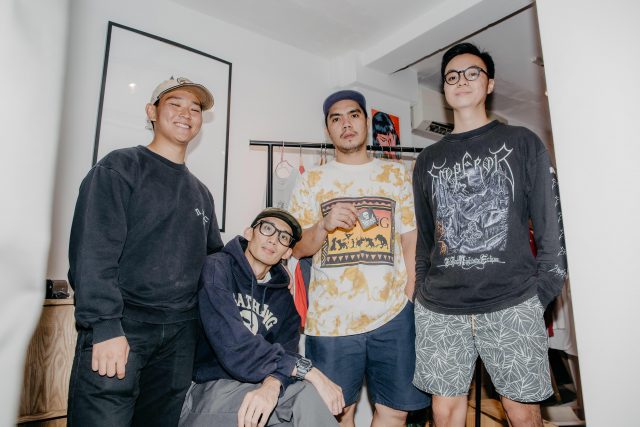 Photo Courtesy of Deaththreads
From left to right, Edmund, Deon, Paul and Joshua from Deaththreads

Now the team has a dedicated space at Kapo Factory at Tai Seng, which houses an extensive collection. The founders are also looking to have longer opening hours. They used to operate just one weekend a month. But at the end of May, they held their pop-up over 4 consecutive days.

Besides Deaththreads, another vintage apparel provider is Loopgarms, which has a physical store at Veerasamy Road. Started by 2 vintage fashion enthusiasts, FJ Sai and Isaac Ang, Loopgarms buy, sell and trade a wide variety of items, from caps to bags to jackets, at more wallet-friendly prices. 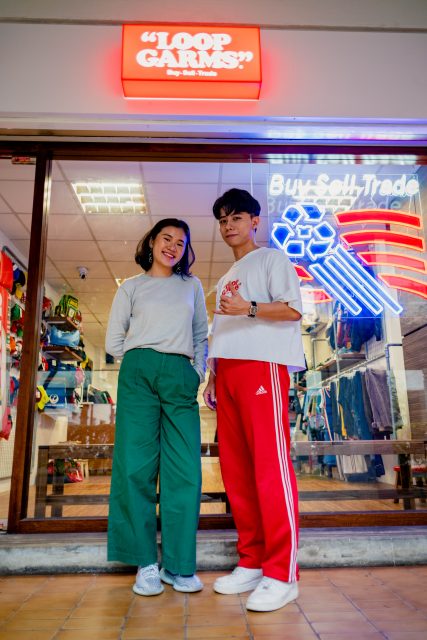 “We went to Japan and spent 3 to 4 hours in a particular [vintage] store called Kinji,” said Mr Ang. “I was just telling FJ we should do something like that in Singapore.”

The pair, both 26, opened Loopgarms in February 2018. Besides bringing in foreign goods, they also sell uniquely Singapore vintage items from Haw Par Villa caps to Under One Roof coasters.

“(The youth) are much more open to trying out new things, even if they’re second-hand,” Mr Ang said. “I think that’s the beauty of vintage clothing, it’s super difficult to find a second piece.”

Mr Lee of Deaththreads is also confident about the market demand for pre-loved clothes, especially those with commemorative values.

“It’s not just second-hand clothes, some of them really have a history to them,” said Mr Lee.

“(Our collections) are over 20 years old and they’re still in (good) conditions. Where are you going to find that anywhere else?”