Female Millennials In The Funeral Business

The UrbanWire she speaks to three women in their 20s working in Singapore’s funeral industry.

Death is feared by many but some young Singaporean women are happy to stare it in the face. One such example is 25-year-old funeral director at Eternal Life Bereavement Services Harmony Tee who gave up a promising career as an audit associate in one of the world’s largest accounting firms, Ernst & Young, to pursue her true calling in life. 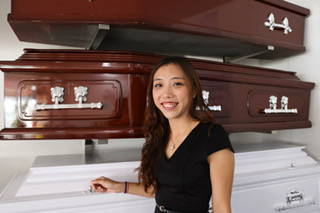 Ms Tee’s passion for handling funerals on a daily basis may seem morbid for most people. But as a devoted Christian, she sees her job as a meaningful ministry where she can meet people from different walks of life and connect with them emotionally.

Entering this industry as a young female was not easy. Ms Tee struggled for the first 3 months when she first took over her family’s business as her older colleagues were doubtful of her abilities.

She said: “You enter the industry as a young and inexperienced female, yet you’re ordering them to do things. So why should they listen to you? The only way to connect with them and gain their respect is by building a relationship which takes time and effort.”

Often, there is a common perception that those working in the funeral industry do not have the choice to work in this ‘grim environment’ due to the lack of an education. There is also a stigma towards them, especially in Asian cultures, as it is deemed to be pantang (unlucky) to be associated with the dead.

However, this perception is changing as young Singaporeans are becoming more open-minded towards the idea of serving the dead. According to TODAYonline, there has been an increasing number of millennials who are working in the funeral business over the years – a route usually less traveled by the younger generation.

One of Singapore’s most prominent funeral parlors, Direct Funeral Services, receives up to 8 job applications per month from those between the ages of 20 to 40. They even began to offer internship programmes to equip the younger generation with the skills needed in this profession.

23-year-old Wong Xiao Hui is among those who have undergone the internship earlier this year and is currently working as a pallbearer at Direct Funeral Services. 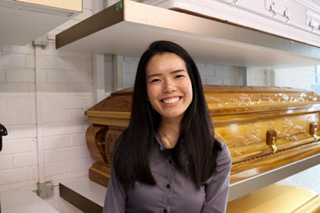 Working in the funeral industry has always been a dream for 23-year-old Ms Wong. Photo: Nicole Chow

Ms Wong’s dream is to become an embalmer after watching a Japanese drama, Shigeshoshi, which tells the story of a Japanese embalmer and his experiences.

She said: “It’s a dream come true for me. I look forward to work every single day and I know that this is what I’ve been looking for – a sense of purpose and meaning in my life. I just felt that it’s my calling and somehow, everything in my life seems to be leading me towards this line.”

She looks up to managing director of Direct Funeral Service Jenny Tay, 32, who is the daughter of Singapore’s philanthropic undertaker Roland Tay, 71. She is one of Singapore’s well-known female undertakers who has even been featured on BBC World News for her viral coffin-themed wedding photos. Ms Wong says: “She’s trying to change the perception that death can be a positive thing rather than something negative. It’s a huge and difficult goal if she’s doing it alone. So, I really admire her and hope to be the same one day.”

She notes that more female millennials are entering the funeral industry in recent years and feels that “girls who work in this line are freaking cool”.

Another young female millennial in the funeral industry is Kelly Lim, 27, an undertaker at her family’s 70-year-old funeral business.

Unlike the common perception that it’s tough for females in this industry to find a partner, the gutsy undertaker shares that it hasn’t affected her dating life at all. “In fact, men want to date me because I’m fearless, ambitious and have guts that most would only dream of having,” Ms Lim said.

Ms Lim hopes to give families a peace of mind through her job as a funeral undertaker. Photo: Nicole Chow

She mentions that females are usually perceived to be weaker but she thinks otherwise.

She said: “In fact, we’re more sensitive and empathetic which will help families better. I hope to see even more young females pursuing their dreams to work in this unique trade.”