National Serviceman, Akif Halqi shares about his brief but unforgettable experience as a K-Pop star in South Korea.

After a long day of vocal and dance training, hungry Akif Halqi went to the pantry, poured hot water into his Tom Yam cup noodles, and gleefully slurped his noodles.

The next day, he noticed a new sign on the hot water dispenser: THIS HOT WATER IS NOT MEANT FOR CUP NOODLES.

The 22-year-old won the local leg, beat 16 other hopeful teams and found himself catapulted to the extravagant stage in Changwon, clinching the Best Vocal award. 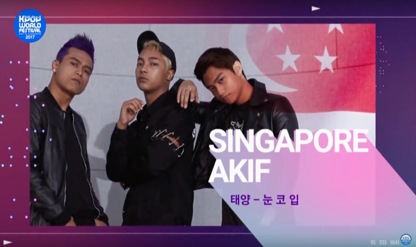 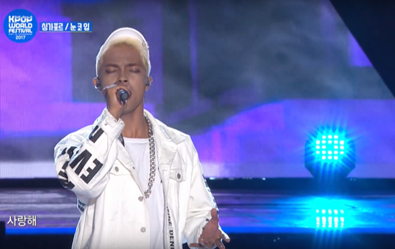 Beyond the glitz, glamor and glory of Singapore’s golden boy on stage, however, was an unimaginably intense 7-days training in Paju Camp.

One night, Mr Halqi and his friends could not contain their hunger and decided to secretly savor the Maggi noodles they had brought along from Singapore. To their surprise, a manager caught them in action and left without a word.  When they returned to the pantry the next evening, they discovered a new sign with words in bold: THIS HOT WATER IS NOT MEANT FOR CUP NOODLES. Shocked, the trio quietly went back to their rooms and slept.

Strict diets are not uncommon among K-Pop stars. South Korea soloist Lee Ji-Eun, whose stage name is IU, was known for her notorious diet: An apple, a sweet potato, and a protein shake a day. Thankfully, Mr Halqi’s diet was more humane.

“Breakfast is usually small portions of fish, lots of vegetables and some rice. We were strictly allowed one portion of each dish only. If you asked for more, they wouldn’t give you any, even fruits,” he shared. They were also barred from consuming anything after dinner.

Once Mr Halqi landed at Incheon International Airport, he soon found himself on a speeding taxi to Paju Camp, the school tasked with transforming him into the likeness of a K-Pop star within a week. With barely a pause for breakfast upon arrival, his translator went up to him, saying: “Akif, it’s time for your vocal training.”

“I haven’t even adjusted. I’m (was) still feeling the jet lag,” he recalled.  Soon, he was in the cold studio, warming up his vocal chords in front of his Korean instructor who ordered: “Are you even serious about joining this competition? If you’re not, go back!”

But Mr Halqi took it in his stride, saying: “He told me what my flaws were. Nobody has ever corrected me like that. Though hurtful, I knew it was constructive feedback. I was embarrassed to be reprimanded in front of photographers and other trainees, but I learned a lot and believed it has helped improve my singing.” 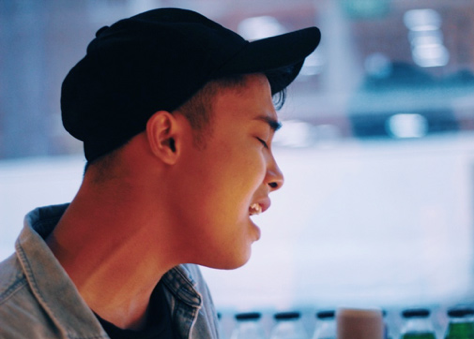 In this media dominated world, is what we see on stage or on screen the reality? According to him, he was required to sign an agreement form to “comply with whatever the media wants” which contractually bound him to do everything asked of him, for the show’s narrative arc.

One revealing example of this happened during his vocal training session when he was given a shelling by his instructor and broke down in tears. Seizing upon this vulnerable moment, the production crew instructed him to cry again for the camera. He had to pretend to weep – louder and sadder – in front of 3 different cameras, at 3 different angles. He said: “I was already very down but did it anyway because I understood that it was good for TV.”

He shared that his biggest takeaway was still the experience in itself. Despite there being many instances that made him break down or trigger a panic attack, he never thought of giving up. 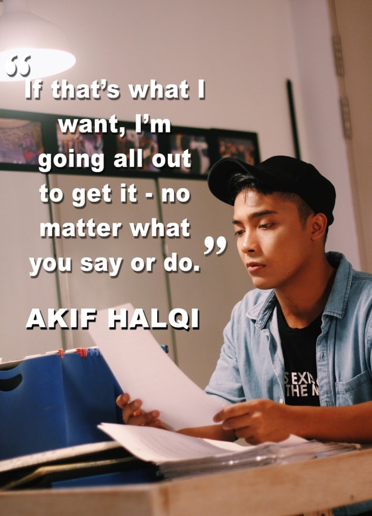 His manager Shiyamielah K.P, said: “Akif is someone that stays true to what he loves, taking pride in whatever he does. You don’t have to pressurize him because he is self-motivated and if he says he’ll do it, there will be quality.”