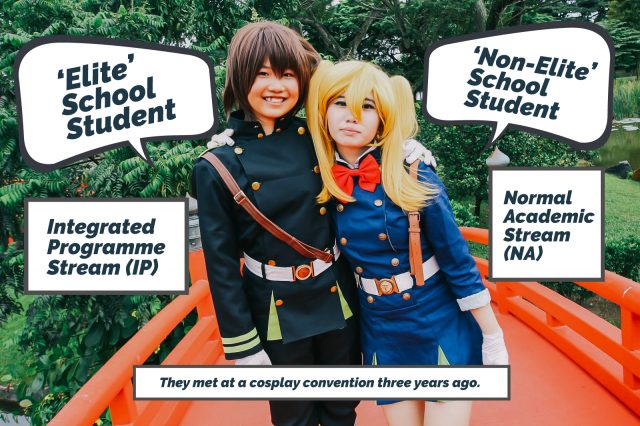 Jenna Ong (left) and Shynn Low (right) are good friends despite being in different academic tracks. Photo by Jenna Ong.

Raffles Girls’ School student Jenna Ong, 16, often feels the need to hide the name of her secondary school when interacting with other students from non-elite schools.

“I felt a bit uncomfortable talking to them, not because I didn’t want to, but just because I knew they would treat me differently,” she shared.

As a result, for a long time, she didn’t have any close friends in non-elite streams – until she met 16-year old Shynn Low, who’s in the Normal (Academic) stream.

The two hit it off after meeting at a cosplay convention 3 years ago.

Jenna says she does not find it hard to interact with Shynn though they are from different academic streams.

“Your academic ‘status’ doesn’t really affect day-to-day conversations, so it didn’t matter for me,” Jenna adds.

A 2017 report by the Institute of Policy Studies found that Singaporeans could name a friend of a different age, gender, race or religion more easily than someone of a different social class. It was also found that people who study in non-elite schools tend to have very few friends from elite schools and vice versa. An ‘elite’ school student is generally understood to be students from the IP academic stream.

These findings have since elicited a series of debates regarding the growing social class divide in Singapore, and how academic streaming could have contributed to the divide.

According to a poll done by The UrbanWire of 100 respondents aged 13 to 26, 69 per cent of them said they don’t have friends from different academic streams.

Shynn said she feels that academic streaming has reduced the opportunities for mutual interaction.

“We need to be exposed more to people of different academic streams and have an open mind to accept, as well as to adapt and compromise,” she says. 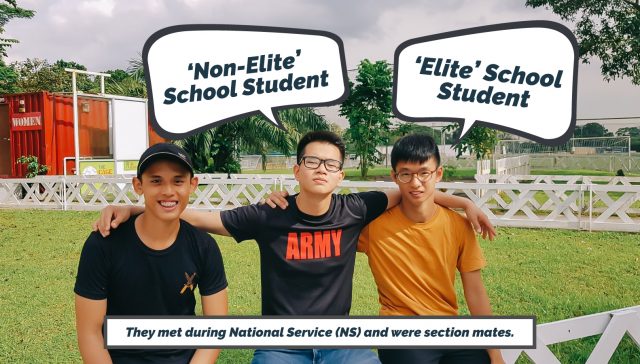 Melvin Ngo (middle) and Ervin Ang (right) met when they were serving their National Service (NS). Photo by Ervin Ang.

“It’s been just 6 months since we met, but it feels like I’ve known him forever,” says Melvin.

Ervin says: “People tend to assume we (elite school students) are snobbish and would look down on them when in actual fact, we are just afraid to mix with them due to our natural fear of trusting strangers and being unable to be transparent with them.”

He adds that because of their differing mindsets and behavior, it might be hard to change and relate to people of other academic streams.

Dr Juliet Choo, a sociology lecturer at Ngee Ann Polytechnic, says: “We interact and form social groups with people who share similar characteristics as us.”

“We are drawn to seeing differences more than similarities, and that can cause social divide,” she adds.

Though praising efforts such as NS to promote social mixing of people from different backgrounds, Ervin feels that it is ultimately up to the individual to close the social divide gap.

“The crucial factor lies in the compatibility in personality type, whether a mutual connection can be forged,” he says.

The UrbanWire conducted a survey of 100 respondents aged 13 to 26 on their thoughts of social mixing among students in Singapore. Infographic by The UrbanWire.