Going to School with Rich Kids

Coming from a humble background, Marcus Lai shares what it’s like to study with well-heeled classmates in a well-resourced school. 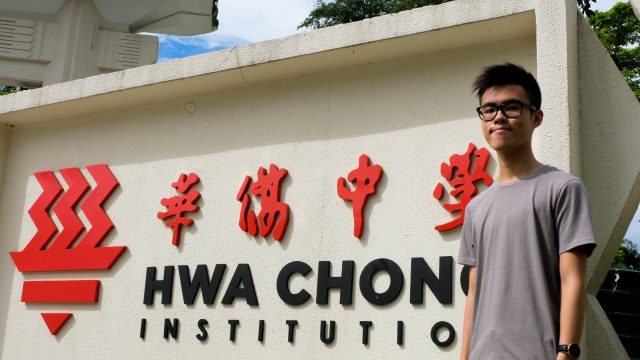 Marcus Lai graduated from Hwa Chong Institution a year ago. Revisiting his alma mater brought back many memories of his early struggles. Photo by: Gregory Neo

When his classmates were not in school uniform, they would be wearing branded clothes and watches. That’s what Marcus Lai came to notice during outings with his Hwa Chong Institution (HCI) classmates.

“They say their shirts cost $300,” recalled Marcus, who was then in Secondary 2. “My entire outfit combined didn’t even add up to that.”

Marcus comes from a humbler background in comparison to many of his peers.

“Majority of them live in condominiums and private houses. A significant number are staying near the Bukit Timah region,” Marcus told The UrbanWire.

According to the 2015 Singapore General Household Survey, more than 44 per cent of households in Bukit Timah have a monthly household income of at least $20,000. In comparison, just over 5 per cent of Woodlands households are in the same income bracket. The national average is 12 per cent.

The top 10 districts with the highest proportion of households with over $20,000 in monthly income.

It also didn’t help that Marcus’s father had to end his printing business at the start of his HCI days.

“(My dad) was introduced to this seller, who told him that he could buy this machine which costs tens of thousands and could speed up printing processes.”

“I felt quite helpless because even though my family is put in such a bad situation, I couldn’t do anything,” says Marcus.

Plagued with negative thoughts and riddled with concerns about the debts, Marcus lost focus in his studies.

“I was quite depressed for a period of time and I did not really have the mood to study back then. Throughout Secondary 1 and 2, my grades were quite poor, and I was actually eligible for the O-level class.”

HCI is a top school whose students are typically enrolled in the Integrated Program (IP) or School-based Gifted Education Program. Many bypass the O-level exams. Weaker students, however, might be advised to sit the O-levels.

It was a wake-up call for Marcus. Not wanting his parents to worry about his studies, he decided to work hard and stay focused.

He was not able to afford tuition classes like many of his peers in school but he remained positive.

“My peers who had tuition generally did better and I was kind of envious, but part of me didn’t really care because without tuition, I had more time to myself.”

Marcus added that it’s a blessing for him to be in a well-resourced school.

He said HCI automatically enrolls needy students into all possible financial schemes such as the MOE Independent School Bursary (ISB) scheme. This saves students the trouble of having to source for financial aid themselves.

Marcus himself was a beneficiary.

“Throughout my secondary school years, I managed to go overseas 3 times for different pursuits because of the financial aid available for me. I had the same number of opportunities as long as I performed well in school.”

Further, he’s also grateful to have made many friends who were humble and sensible despite their wealth.